Cisco Systems - tip of an iceberg ❓

Disappointing report from Cisco adds to concerns over global economy

Cisco Systems is another US company that released a worrying earnings report. An important thing to note is that the report from Cisco was for the February-April period and therefore captures the impact of lockdowns in China. This creates a risk that similarly poor performance will be reported by other companies in their Q2 reports. Could a report from Cisco Systems be just a tip of an iceberg?

Cisco Systems (CSCO.US) is a US technology company that manufactures networking hardware, telecommunications equipment and develops software. Stock slumped 17% yesterday in after-hours trading following the release of an earnings report for fiscal-Q3 2022 (February-April 2022). Company missed revenue expectations reporting sales of $12.84 billion, compared to the $13.34 billion forecast and in-line with year-ago level. Earnings per share at $0.87 were mostly in-line with market expectations ($0.86). Net income was 6% YoY higher at $3.04 billion. Big miss in fiscal-Q3 revenue is a source of concern but what acted as the main downside trigger on the company's share price was forecast for the current fiscal quarter. Company said that it expects revenue to decline 1.0-5.5% in the fiscal-Q4 while market expected growth of 6%.

Share price performance of Cisco Systems (CSCO.US) was far from perfect even before the release of the fiscal-Q3 earnings report. Premarket quotes point to a massive 12% slump at the start of today's session. While this is off the lows from after-hours trading, it does not change the fact that stock is expected to start trading at levels not seen since November 2020. Source: xStation5

Why is it important? Cisco's fiscal-Q3 corresponds to the February-April period. This means that the report captured not only the impact of the Russia-Ukraine war but also a new wave of lockdowns in China. In fact, it was the prime reason why the company decided to cut revenue forecasts - the geopolitical situation in Europe and the pandemic situation in China is magnifying supply chain disruptions. Note that these factors are not company-specific. Having said that, there is a real risk that those same factors impact performance of other companies. As new Chinese lockdowns began by the end of March, their impact was not visible in earnings reports for calendar Q1 2022. However, reports for Q2 2022 (April-June) may be heavily impacted by those.

However, there is one stark contrast between the report from Cisco and reports from big US retailers - Walmart (WMT.US) and Target (TGT.US) - who also released earnings for the February-April period this week and disappointed. Cisco Systems noted that it does not see any evidence of weaker demand and that weaker-than-expected results were driven by supply-side issues. On the other hand, Walmart and Target noted that demand weakened as high prices encourage consumers to be more prudent about spending. Also Walmart and Target noted that inflation is biting into their margins. Such developments increase likelihood of downward revisions to US GDP forecasts.

Investors are getting worried

There are plenty of things investors can worry about - Russia-Ukraine war that greatly disrupts food and energy trade, lockdowns in China that magnify supply chain issues or expected quick pace of tightening aimed at cooling the economy and bringing inflation down. Given all of those issues happening at once, one should not be surprised that the word "recession" is brought up more and more often. In fact, there seems to be a significant correlation between intensity of "recession" mentions in news stories and performance of the US stock market. Post-pandemic recovery rally on Wall Street was accompanied by a dropping number of articles mentioning recession. However, a combination of geopolitical and economic factors saw the number of mentions pick-up in 2022 and it was met with a poor performance of US indices. 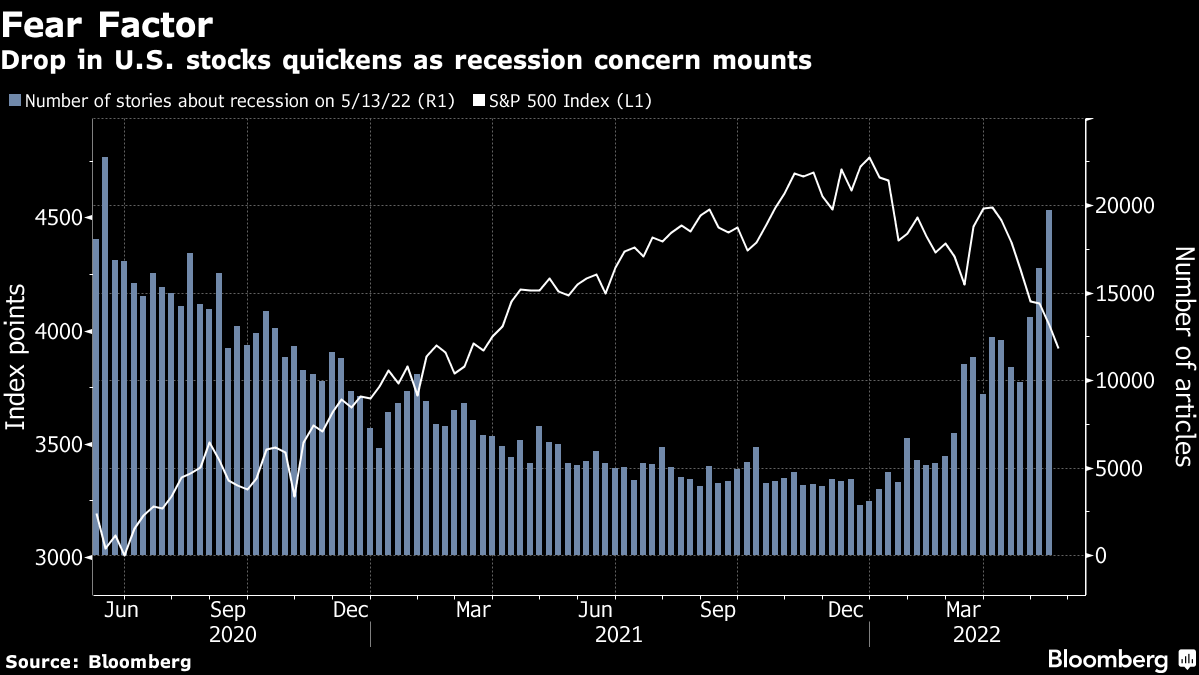 There seems to be a significant correlation between intensity of "recession" mentions in news stories and performance of the US stock market. Source: Bloomberg