Over recent weeks we have seen a massive decline in bond yields globally being spurred by the rising demand for safe haven assets amid intensifying trade tensions between the US and China. In case of the German debt market we had some other arguments behind the rally in prices - simmering concerns regarding the Italian battle with the European Commission over the next year’s budget and numerous protests in France. The latter has raised concerns about the French fiscal position when Emmanuel Macron has agreed to ease inhabitants, vowing to deliver some measures, in order to terminate protests. However, we reckon that the recent German bond price increase may have been exaggerated.

The market-based probability for a 10 bps deposit rate increase remains low offering some room to market rates to recover over the coming months. Source: Bloomberg

The first point we would like to focus on is monetary policy conducted by the European Central Bank as it bears a massive impact on the European debt market. The ECB is widely expected to wind down its asset purchase programme (APP) this month meaning that the central bank will no longer buy assets since the beginning of 2019. There is no doubt that the Bank has been the prime player in the European debt market in recent quarters and its absence could begin exerting downward pressure on bond prices. Let us recall that German bonds account for more than 25% of total bonds being bought by the ECB according to its capital key - the largest portion in the entire programme. As for now the big question mark is the time when the ECB could deliver the first interest rates hike. Looking at the market-based likelihood one may arrive at a conclusion that it will not happen at least until December 2019 (keep in mind that the ECB claims that the onset of rate rises could come in after the summer next year meaning, in theory, that the October meeting is ‘live’). However, the low probability and the low current yield levels suggest that market rates have space to recover in months to come pushing prices lower. 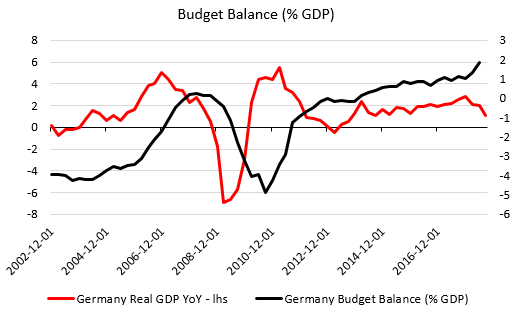 The German budget surplus hit its highest level in the second quarter this year. The rate of real GDP growth eased in the three months through September. Source: Bloomberg, XTB Research

Since the European financial crisis, starting in 2010, most of European economies have been able to improve their budget balances markedly. There is no doubt that higher economic growth acts in favour of higher budget surpluses, hence when the economy begins slowing down, it should morph into lower surpluses sooner or later. Meanwhile, the rate of real economic growth in Germany has declined noticeably over the recent quarters and it is expected to continue losing momentum in the foreseeable future. This along with possibly tighter monetary conditions could reduce the German budget surplus forcing the government to increase borrowings. So, the bond market in Germany is likely to get a double-whammy - the ECB will stop buying bonds (looking forward it ought to mull over selling them) and the government will increase the issuance of bonds (with various maturities).

German government will ramp up issuance of bonds

Over the course of the past year the German government was reducing the issuance of bonds but it could change in the years to come. Source: The Federal Government, Macrobond, XTB Research

Over the past years the German government was reducing the amount of issued bonds reflecting the better fiscal position. As a result, the indicator of bond issuance to German GDP declined from above 10% to roughly 4% but the past year could have been the last one with so low issuance of bonds. According to the plan presented by the German Federal Government the issuance of bonds is forecast to rise gradually until 2020. Along with lower economic growth and the higher level of issued bonds the above-mentioned indicator should increase. Therefore this year could be the last one with the improving fiscal position.

According to the newest information the Italian government has decided to lower its deficit target to 2% from 2.4% before submitting its renewed proposal to the European Commission. The announcement drove Italian yields immediately below 3% for the first time since September. At the same time, German bond yields spiked reflecting a lower demand for safer bonds. If the revamped budget is accepted by the European Commission it could remove the major internal risk weighting on the shared currency and German bond yields.

From a technical viewpoint one may suppose that bulls could struggle in the weeks to come. The German 10Y bond price has hit the upper limit of the triangle pattern being underpinned by the local supply area. Note that the price has been moving within this formation for more than four years, if this is to continue we may count on a pullback well below 160. Therefore, we recommend selling the bond at a market price with the targets placed at 160.5, 157.8 and the stop order at 166.7. Source: xStation5 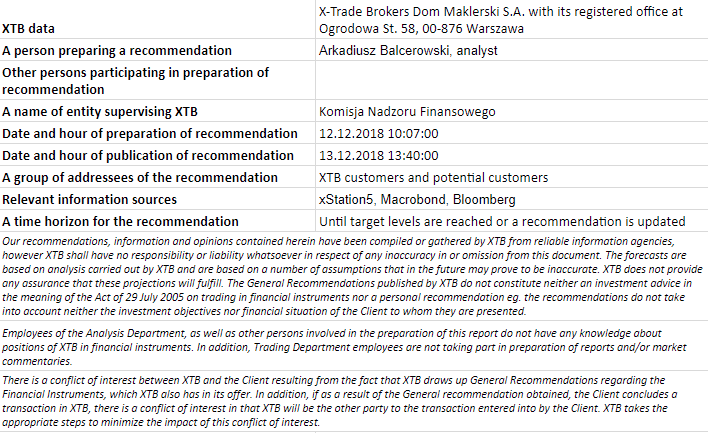 Coinbase (COIN.US) stock jumped more than 2% trying to erase recent losses as the cryptocurrency exchange benefits from bitcoin price rebound. Much of...

The Czech National Bank raised interest rates by 0.25 percentage points to 0.5 percent, thus following in the footsteps of the National Bank of Hungary....