Netflix (NFLX.US) is facing intense competition from its rivals and has seen its market share decline from 51.4% in the first quarter of 2020 to 43.6% in the fourth quarter of 2021. The company has more than 222 million paid subscribers, but a huge TAM (Total Addressable market) of 750 million means there is a long way to go for growth. Netflix subscriber growth has slowed and the share price is now down 52% from its highs in November 2021. Netflix is ​​inherently undervalued, but it still has a substantial market to penetrate.

Netflix, Inc. (NFLX.US) stock price is down 52% from its highs in November 2021. The company has faced an intense battle in the streaming wars, resulting in its stake market has been consumed. , going from 51.4% in 1Q2020 to 43.6% in 4Q2021. Despite this, the company remains a market leader, with the lowest turnover in the industry, top management, growing margins, and a huge growth track ahead. Is this action worth tuning into? Let's dive into trading performance, market opportunity, financials, and valuation in more detail. 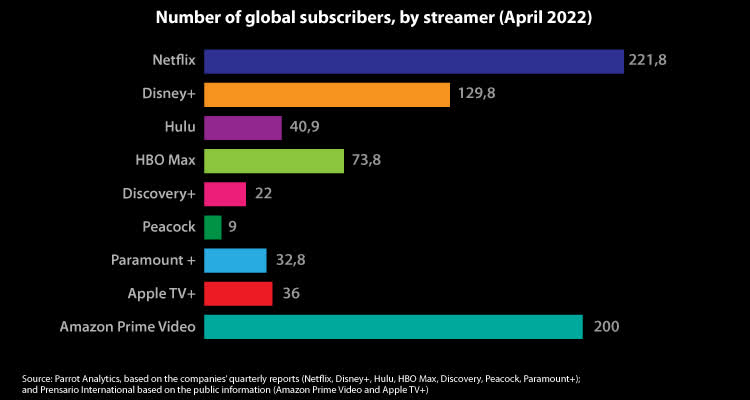 The size of the streaming market is forecast to continue to grow at a CAGR of 18.3% through 2026. While pay TV subscriptions were 100 million in 2014 and are expected to decline by 40 % to just 60 million by 2026. Netflix is poised to benefit from this. With a simultaneous growth in the streaming market while falling in pay TV.

Netflix faces intense competition from its rivals and has seen its market share decline from 51.4% in the first quarter of 2020 to 43.6% in the fourth quarter of 2021. While rivals such as Apple TV, HBO Max and Disney+ have increased their market share from 13.5% to 21.4%. 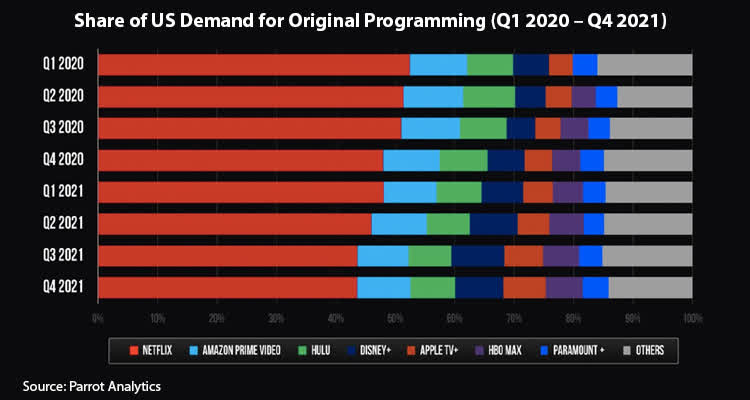 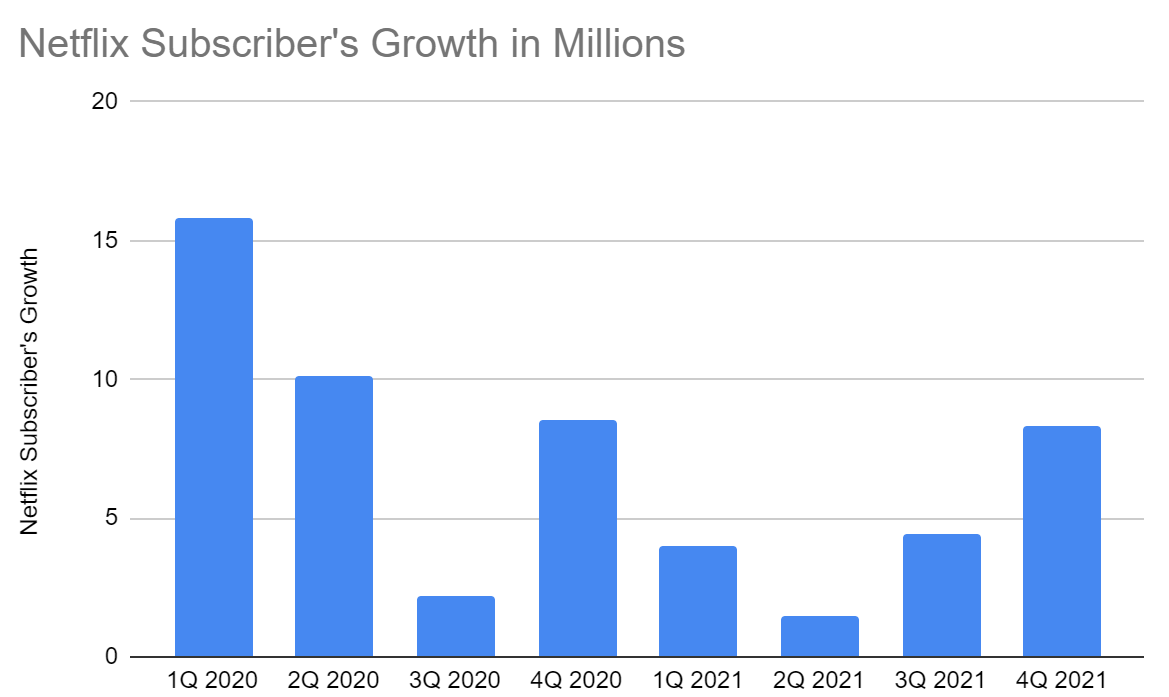 The demand for original content is a key indicator of the growth of new subscribers. Original programming such as El Juego del Calamar (Squid Game) and La Casa De Papel proved very popular with non-English speaking audiences and thus helped curb the company's subscriber losses, compared to previous quarters. in 2021.

Netflix released the wildly popular The Witcher and Cobra Kai at the end of Q4 2021 and so this should boost Q1 2022 demand. New episodes of Stranger Things are also coming in 2022 which should help with the demand.

Netflix is ​​currently releasing between 150 and 200 episodes of new original content, more than competitors like Disney+, Hulu, HBO Max and Prime Video. This gives Netflix a wide variety of content that appeals to everyone and makes the company the "anchor" of the streaming industry with other services seen as "add-ons."

Netflix offers one of the cheapest forms of high-value entertainment, and its service is still 80% cheaper than the average pay TV package in the US, costing 30 cents per hour of usage. Now, although the "Streaming War" is in a primary sentence, but is this really a war? According to Parks Associates, 61% of US households with broadband subscribed to more than 2 streaming services as of 2020, up from 48% the previous year. This makes a lot of sense given that the average pay TV subscription is $80, which could be transferred to multiple content providers and still be cheaper.

Netflix has also shown "pricing power" in the industry and has recently increased prices, yet still remains profitable.

Given that the median household income in the US was $79,900 in 2021, a price increase doesn't seem like a problem for the middle class, but this is an increase in income that has a direct impact on the bottom line of Netflix. 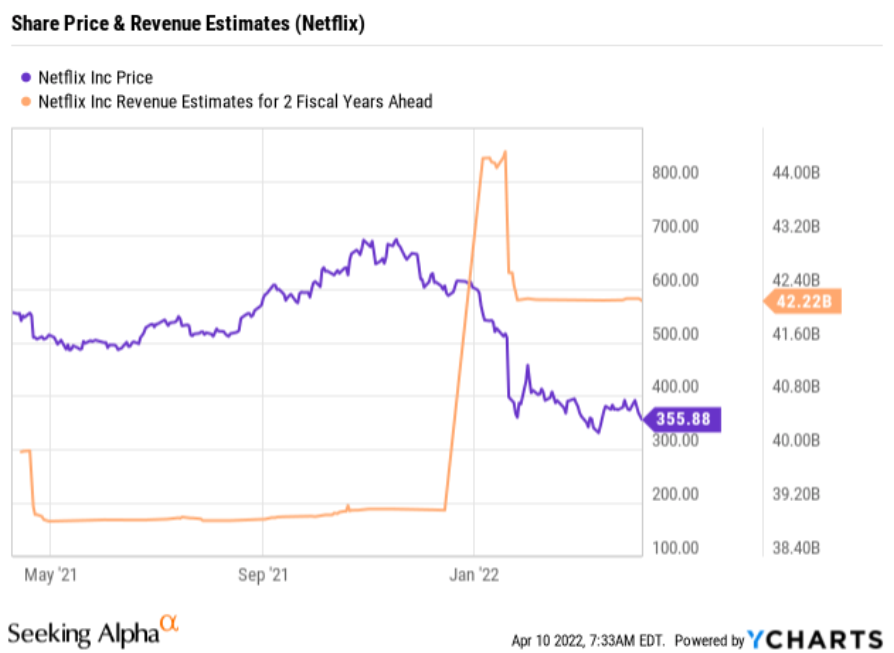 The company's price increases have helped increase gross profit margins from a healthy 38% in 2020 to 40% in 2021. While operating profit margins have been trending upwards from about 12% to 20.86%. 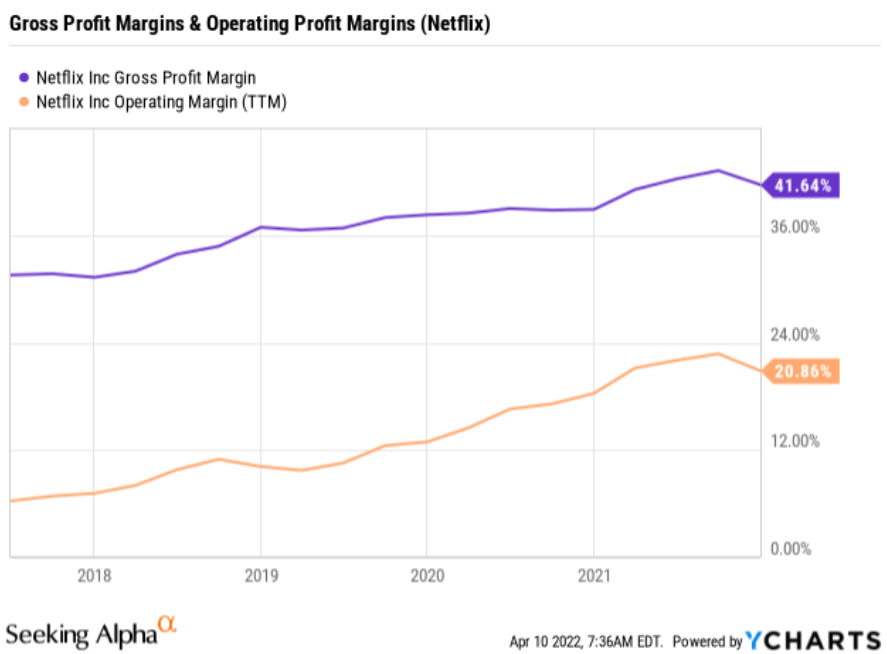 Content is Netflix's biggest spend, but the good news is that the company has kept content spend per subscriber steady, with total content spend growing at 23% year over year. As of fiscal year 2021, Netflix has $6 billion in cash and cash equivalents with current debt of just $699 million. However, its $14.6 billion in long-term debt could be a problem if interest rates rise, which is already happening.

To value Netflix, the market consensus opts for the flow discount. Also, capitalizing on R&D expenses to increase valuation accuracy. Placing a revenue growth of 17% for the next 5 years of Netflix, conservatively considering that the operating margin of the company will remain stable at 24%, although this figure could increase if the company increases its prices again. 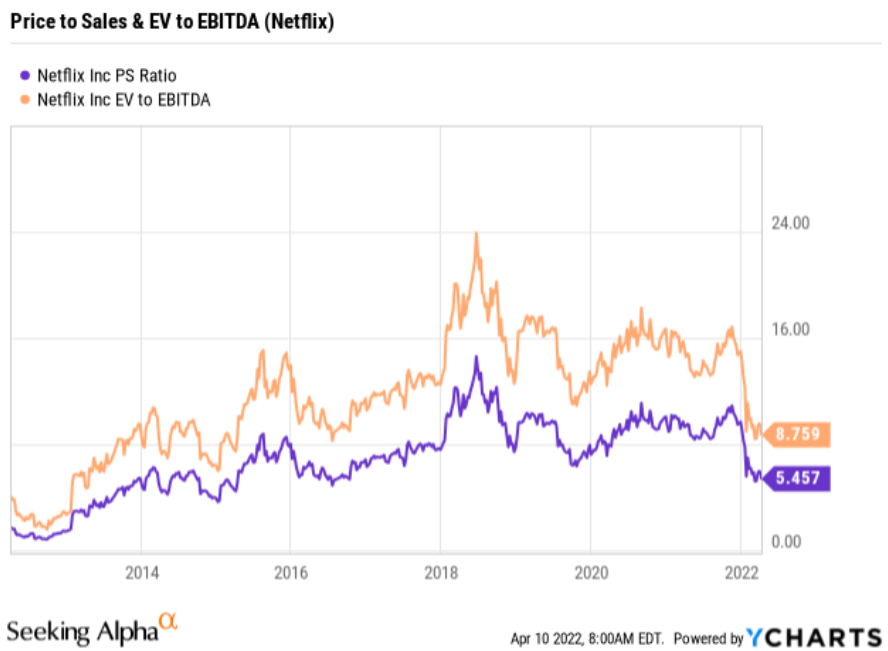 Additionally, including the P/E ratio, we can compare Netflix against its competitors. Although this is not a fair industry comparison, as Netflix is a pure content creator, while for the other larger companies it is an add-on service, it is still useful to see the levels. Netflix quotes a forward (12-month) P/E of x30, which isn't exactly cheap, but is roughly in line with the larger tech giants who have less growth potential in percentage terms due to their sheer size. 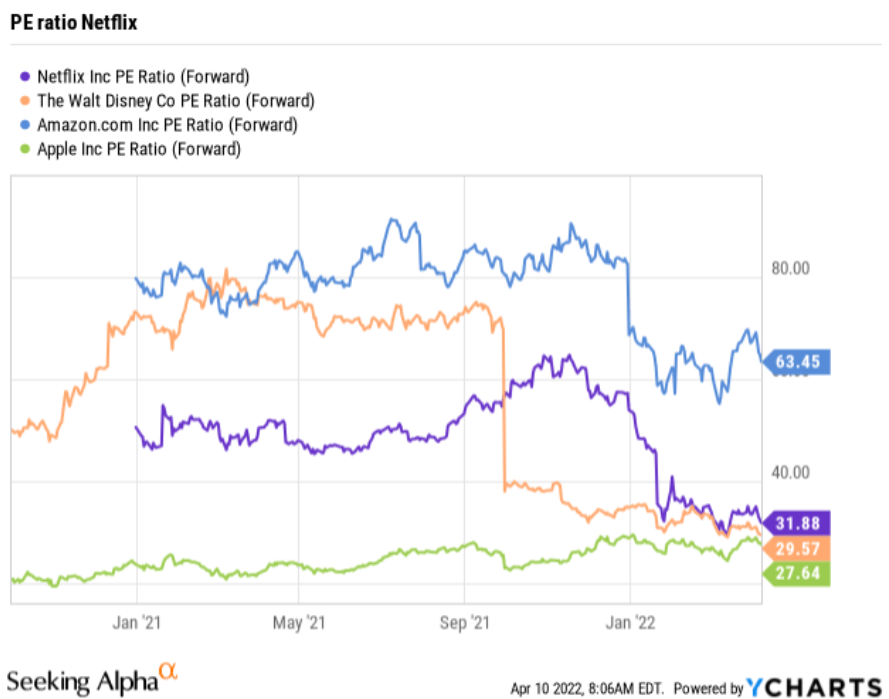 On the other hand, Netflix founder and CEO Reed Hastings bought $20 million worth of stock on January 22, 2022. Hastings paid an average price of $393 per share and owns about 1%. of the company. This is positive from the point of view of synergies between the evolution of the company and the interests of its Executive and shows a positive signal for Wall Street.

Netflix faces tremendous competition, both in terms of content and number of competitors, and many have large capital bases to back them, such as Apple (AAPL.US) and Amazon (AMZN.US). This is a risk going forward and could continue to drive market share declines and subscriber growth declines.

Netflix and all streaming providers are in a race for content, their subscriber growth heavily relies on original content, which is what draws the audience. This means that continuous investment is needed to sustain this business in the long term.

Impact of the war and Russian subscribers

Netflix has direct exposure to Russia and could lose between 1 million and 2 million subscribers in 2022 as the company has suspended services in the region. Although this is less than 1% of the company's subscriber base, it certainly doesn't help the company's overall growth.

The company is down more than 52% from its highs, something that is very attractive from a fundamental point of view for long-term investors, as it is undervalued. In addition, the relative strength indicator (RSI) has been developing a bullish divergence signal since the beginning of the year, which currently converges with the extension of the bullish projection of higher lows since 2018. A double bullish signal that must be taken into account very much in mind.

Netflix is ​​a big company with a big business, and despite growing competition, it remains the market leader and its service acts as an "anchor" and reference for the rest of the market. Netflix's competitors are pouring huge sums into the "streaming wars," but they aren't profitable on their own. So if they don't start to generate a significant return, they may redirect their funds to other bets in the future, which is a bullish outlook for Netflix. The company is currently inherently undervalued, having fallen 52% from its highs, while its fundamentals continue to grow and earnings per share are expected to grow as much as 20% annually. Volatility will remain the biggest drag for Netflix, which has yet to prove it can still grow subscribers, but in the long run this stock is worth keeping an eye on.

The company will publish its earnings report at the close of the Wall Street session, so it will be important to watch the “after market” price from 22:00 CET.