Skyworks Solutions (SWKS.US) have more than doubled since the channel tore up in 2018. Stocks were cheap at the time and profits were forecasting big increases thanks to the 5G tailwind. While some of the returns are due to business growth, there has been significant multiple expansion. Back then, stocks were trading at an absurdly low anticipated PER of 9x and a forward PER (12 months) of 14x. Still, considering how expensive the general market has become and the amount of tailwinds that Skyworks has, it is quite possible that it will continue to outperform the market for years to come.

The biggest tailwind for Skyworks remains the migration to 5G. 5G smartphones have significantly higher Skyworks content per device, going from $ 18 on average for 4G to $ 25 for 5G devices. 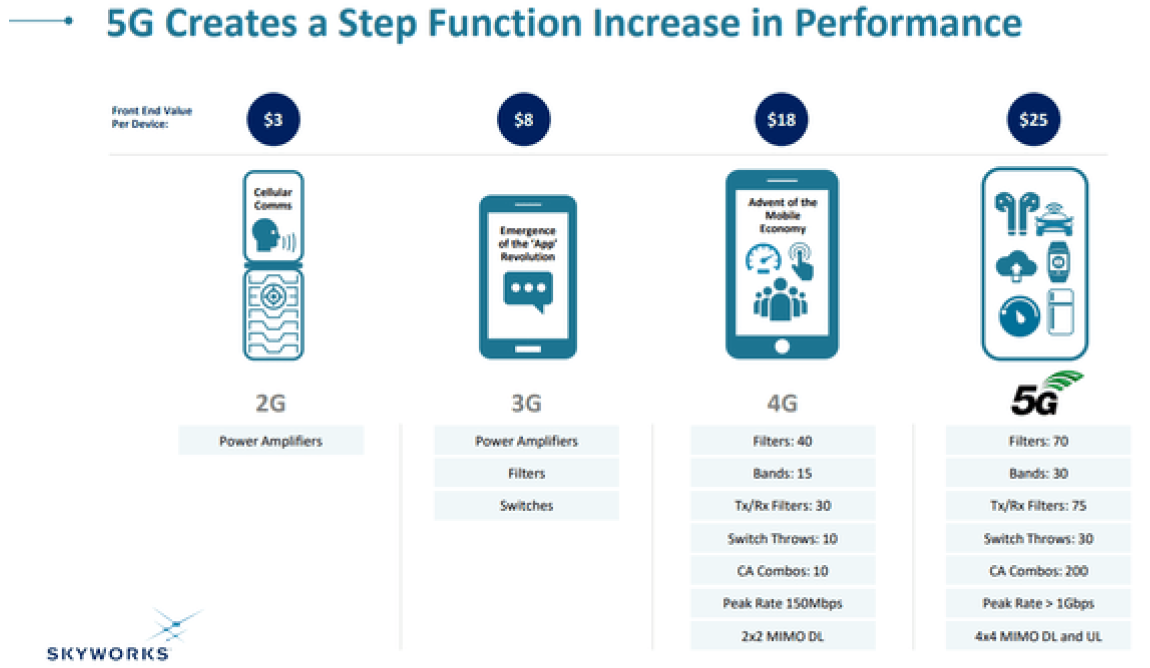 And it's not just on the mobile phone side that Skyworks has 5G content opportunities, but also on the infrastructure side, as well as interconnectivity. For example, self-driving cars represent a $ 50 per car opportunity, roughly double that of a smartphone. It is estimated that 74% of cars will be sold with mobile connectivity by 2024. And that without counting the wide range of IoT devices (The Internet of Things: it is a concept that refers to a digital interconnection of objects everyday with internet, for example home automation) that will require WiFi or 5G connectivity. 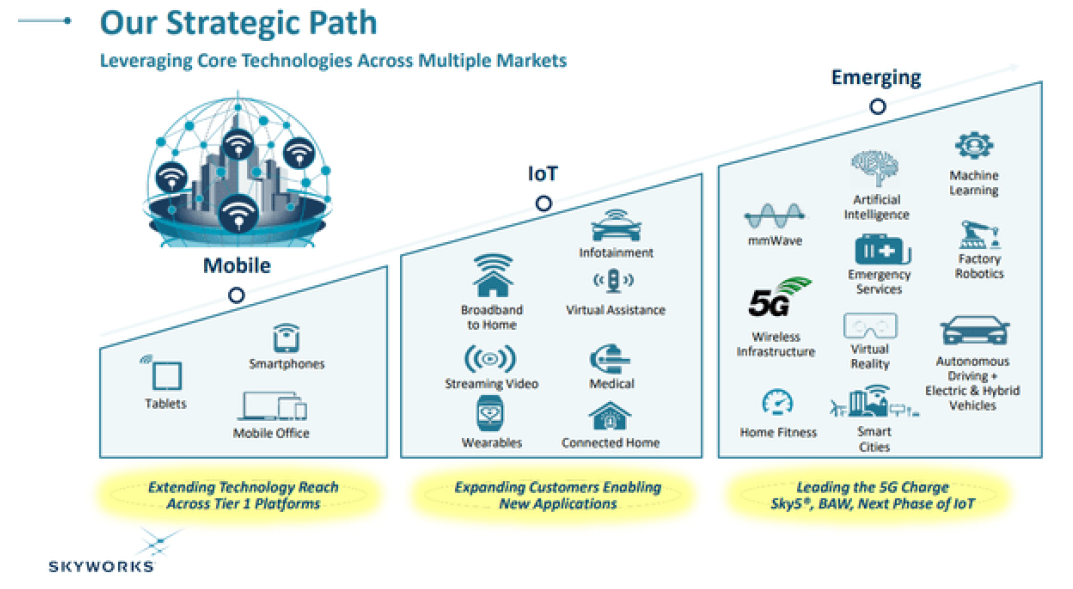 All of this is driving significant revenue and profit growth, and the market expects it to continue for some time to come. For the fiscal year ending in 2023, analysts project earnings of $ 13.04 per share, so the 2-year forward PER is only 13x. Much cheaper than the industry average. Skyworks still values itself as a cyclic semiconductor company even though its markets are becoming more stable and the amount of content per device is increasing.

Looking at the historical growth in revenue and gross profit, we see why the market projects higher profits for the next two years, however it is clear that some cyclicality persists. For example, revenue and gross profit declined during 2020, but growth quickly resumed. So much so that the share price doubled from the 2020 lows. 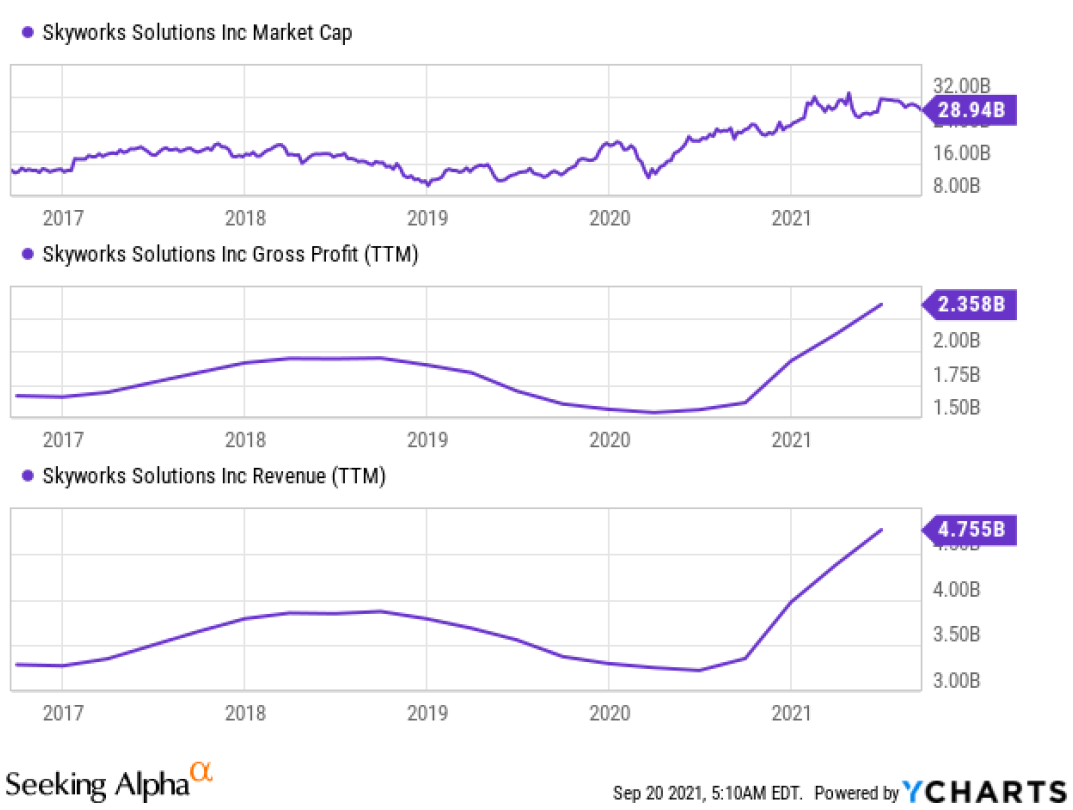 Historically, buying stocks near the median 10-year Price / Sales ratio has been a good entry point. Given the numerous tailwinds, we do not know if the price will correct again to that level, so a good strategy could be to buy an initial position at current prices to avoid missing the train, and double if the shares fall below the 10-year median price / sales. 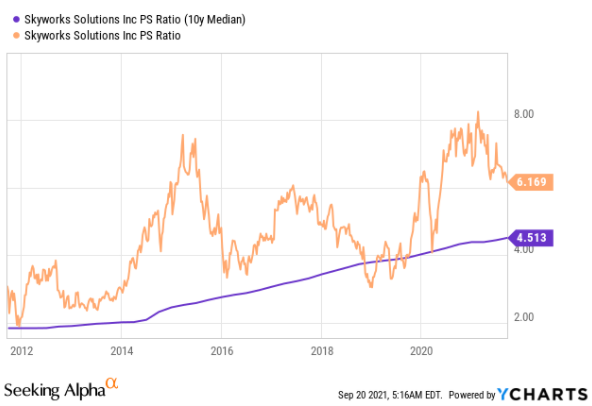 The decrease in cyclicality can be seen at the margins. During the last recession in 2020, margins fell less than half of what they fell during the previous significant recession around 2012-2013. 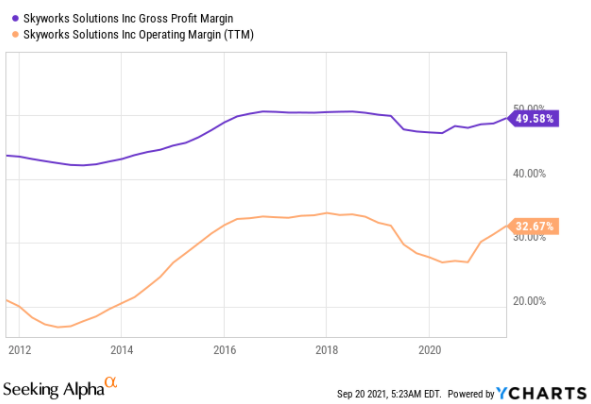 Skyworks has a positive net cash position, therefore the valuation multiples based on the value of the company are actually lower, and the shares are trading at reasonable EV / EBITDA multiples. 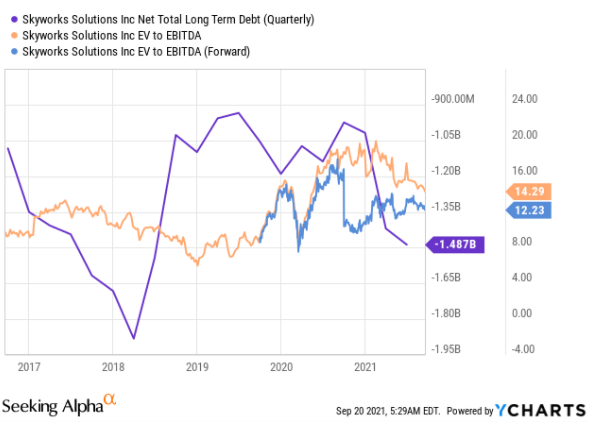 Acquisition of the "I&A" business from Silicon Labs

The above indicators will change in the next publication of results, as Skyworks acquired after Q2 the Silicon Labs business unit of Infrastructure & Automotive (“I&A”) for $ 2.75 billion through direct payment. This business should generate approximately $ 375 million in additional revenue based on Silicon Lab's filing. It also has more than 350 employees, including Silicon Labs senior management, who will join Skyworks leadership.

Skyworks management seemed very optimistic about the acquisition during the latest earnings release, expecting not only cost synergies, but also revenue synergies by bringing some of Silicon Labs' solutions to existing Skyworks customers. Given that the company will publish its results on November 4 at the close of the US session, it will be time to find out if these synergies raised by its executive in the previous presentation have been successful.

The biggest risk we see with Skyworks is its reliance on Apple (AAPL:US), and specifically the iPhone, which is still the bulk of the business. For example, stocks fell after the launch of the iPhone 13, the event was less impressive than expected, as well as when Apple announced a cut in the sales target recently regarding supply issues.

Skyworks (SWKS: US) developed a consolidation process for 4 years with a clearly defined resistance zone around $ 115 per share. After the bullish break at the beginning of 2020 with the 5G technological boom, it corrected strongly due to the impact of the pandemic by more than 45%. Its subsequent behavior has been driven by the technological race financed in part by the significant liquidity introduced in the markets by the Central Banks (Fed) and the main countries, going hand in hand with the behavior of its main client, Apple (AAPL:US).

It currently maintains its price above the short-term reference support at $ 160, which it should maintain due to its “beta” regarding Apple's behavior.

While stocks are no longer the bargain they were when it broke its resistance in 2018, they are still reasonably valued and offer a way to profit from the next cycle in 5G infrastructure. The company is becoming less cyclical as the number of devices and industries diversifies away from the smartphone segment. We believe that the shares are currently priced fairly and a strong correction could present a buying opportunity.

Uber (UBER.US) stock dropped more than 5.0% during today's session as the emergence of a new COVID-19 strain in South Africa raised concerns of fresh...

Virus is once again on top of the agenda following a massive sell-off on stock exchanges on Friday. Investors fear that new, more dangerous variants will...