Recent NFP report showed the US economy added the most jobs since August 2020 and the unemployment rate fell to 6% therefore investors continue to expect a strong rebound. This NFP report fueled optimism that the US economy will recover from the pandemic faster than other countries. COPPER took advantage of it and rose above 9000$ support. Biden’s infrastructure package was also a bullish factor for the industrial metal as a lot of copper is needed for this plan. Finally, a weaker dollar is also boosting copper prices. In this analysis we will focus on three intervals - monthly, weekly and daily - to find out the next resistances if bulls manage to keep control of the market .

Copper has been declining since mid-march after prices painted a bearish pin bar, and reached the lowest of the month at 8687$ around the weekly Tenkan-line. The new week starts with a bullish gap above 9000$. If copper manages to stay above this support, the next major weekly resistance will be around 9200$. If bears take control of the market, the bullish gap could be closed and prices could reach 8900$. In case this support is broken, the next one will be the Tekan-line (red line) at 8770$ 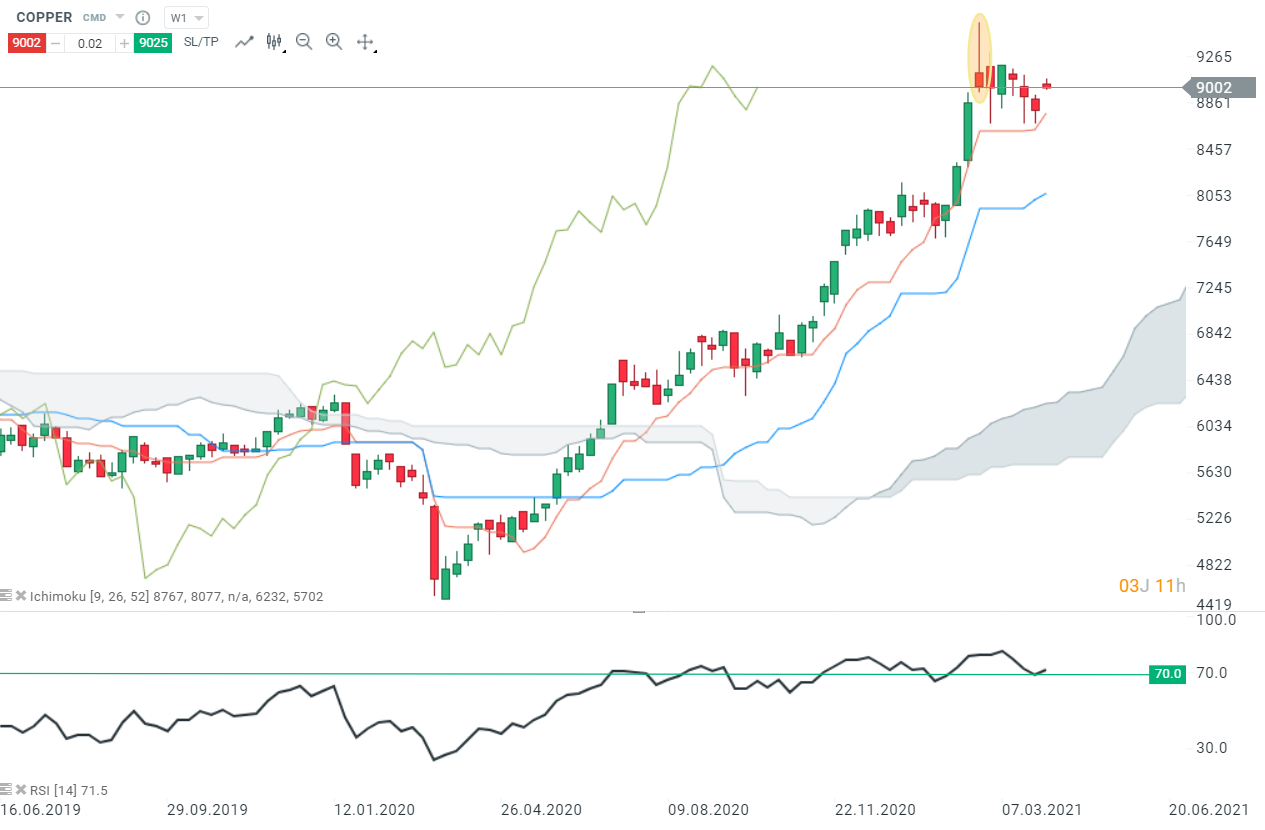 On a daily basis, after a decline, prices found support on the upper limit of the ichimoku cloud. The bullish gap pushed prices to the Kijun-line (blue line), above 9000$. The next resistance can be found at 9135$, the highest of the second half of march. As we can see on the MACD, the bullish gap after testing the Ichimoku cloud lets the MACD line bounce under the zero line, which was previously a strong bullish signal for copper (green circles) and may announce an upward move. 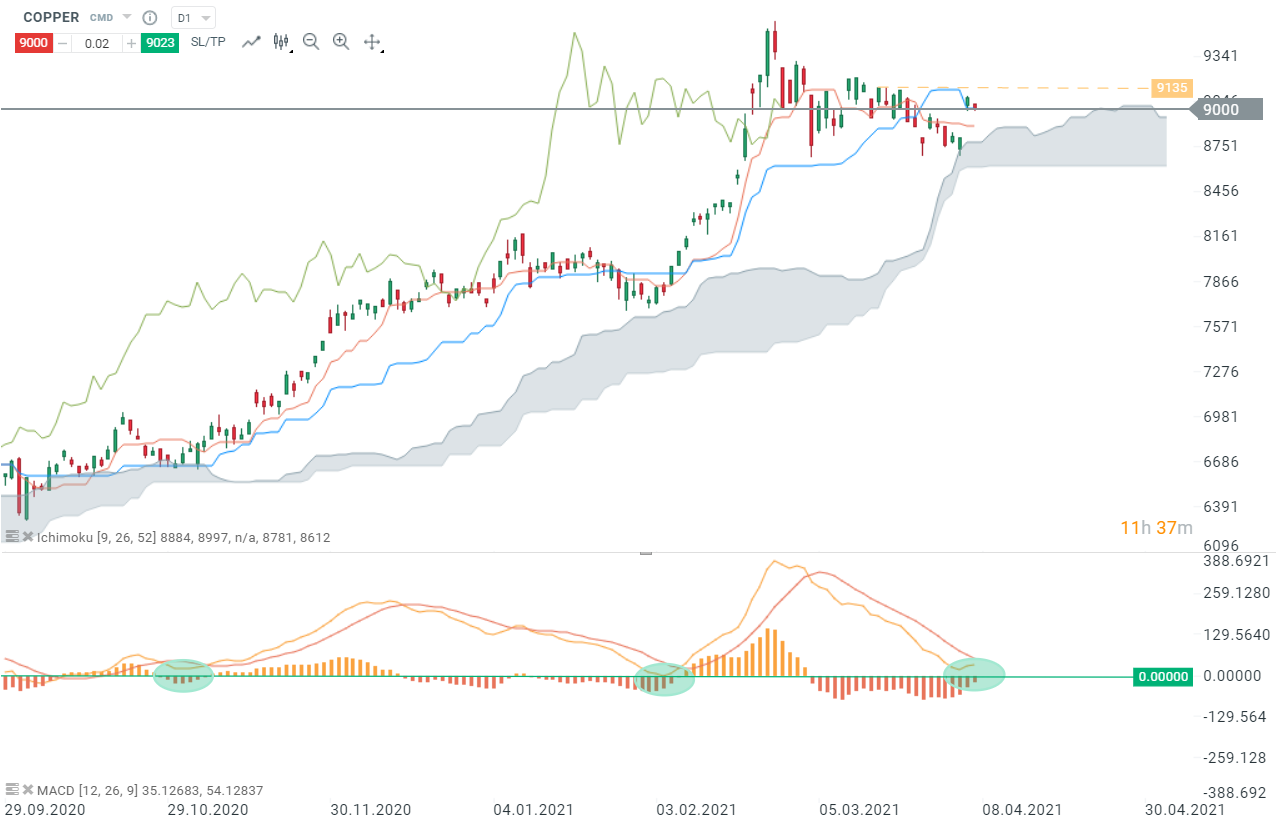 After painting a head and shoulders pattern, prices drop to the upper limit of the cloud at 8700$  and fail to reach the target of the pattern at 8530$. The H4 cloud acted as a support and prices pushed to the neckline (orange circle) of the sub mentioned head and shoulders. Since then, copper losses almost 5% in a downward trend, reaching again 8700$. The bullish gap pushed price inside the cloud and if bulls manage to break its upper limit, a bullish Ichimoku signal may occur and could allow prices to reach 9200$ or 9300$, which represents the top of the second shoulder. 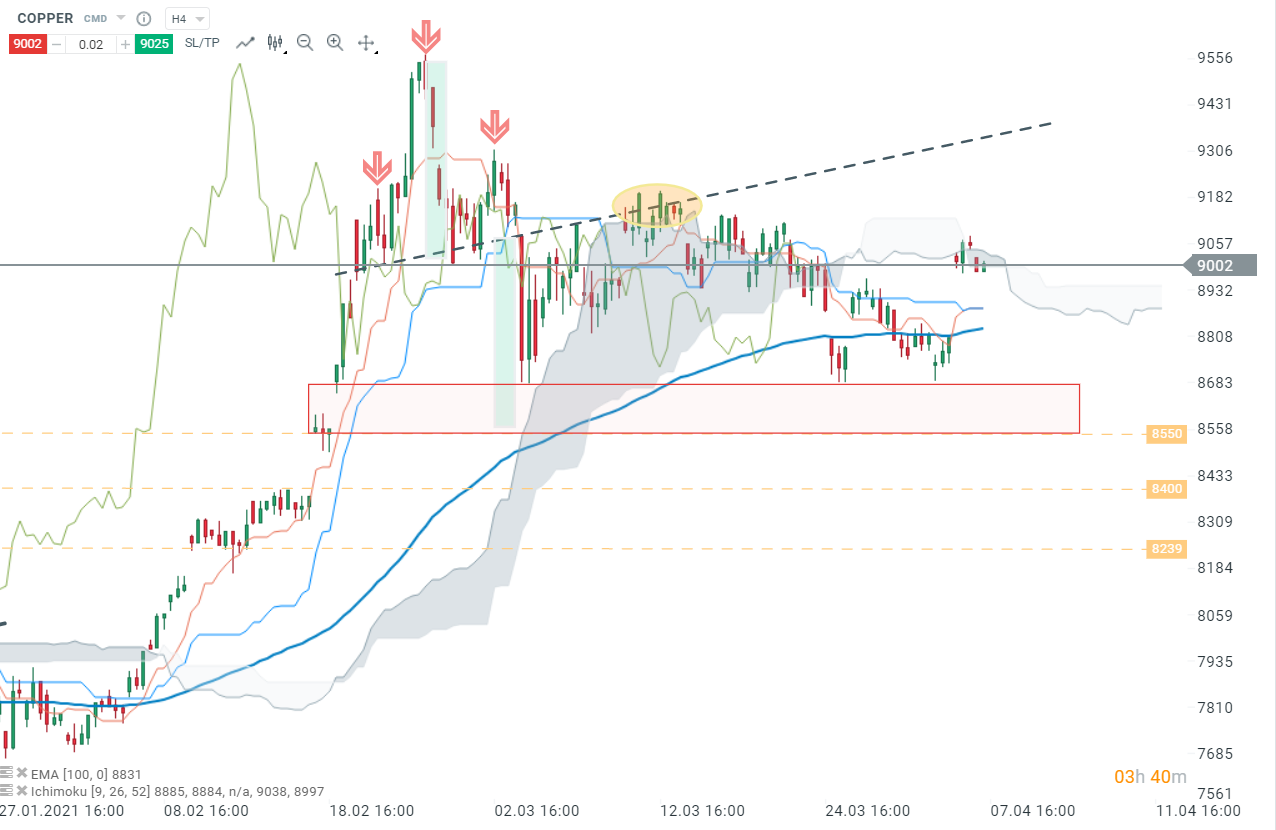