South Korean exports tumbled 19.5% YoY during the first 20 days of October, the second deepest decline since 2016. Taking into account that this data is treated like a bellwether for global trade, one may expect the global trade is not out of the woods yet. The detailed data showed that shipments to China, South Korean largest trade partner, dropped 20% while those to Japan dwindled 21% in annual terms. Moreover, the South Korean economy is also showing lingering signs of a domestic demand weakness with imports tumbling 20.1% YoY during the first 20 days of this month. On top of that, both consumer and producer prices have declined noticeably of late with CPI falling below the flat line for the first time ever in September. Thus, one may notice that South Korean is suffering not only from a broad-based weakness in domestic demand but also from the US-China trade war. In the light of weakening economic conditions the South Korean central bank cut its main rate last week to 1.25%, leaving room for further rate reductions if necessary. All of that means there is no turning point for the global economy in sight. 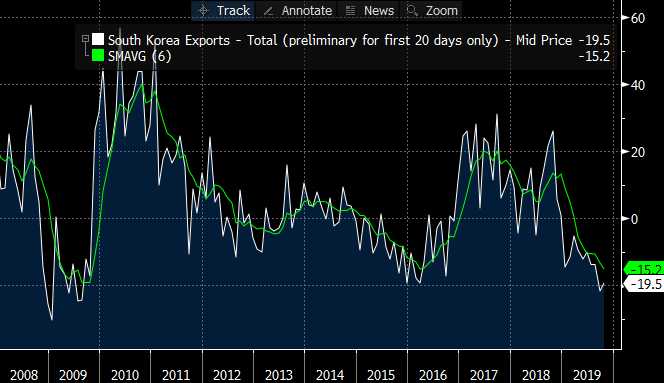 After the first 20 days of October South Korean exports plunged, another double digit decline in a row. Source: Bloomberg