Stock of the week: Visa

While Visa is a 60-year old company that needs no introduction, one may find surprising that its shares debuted on the stock exchanges just a decade ago. Share price increased over elevenfold since company’s IPO in 2008. In this short analysis we will take a look at the latest earnings report submitted by Visa as well as compare the company with its biggest competitor, Mastercard. 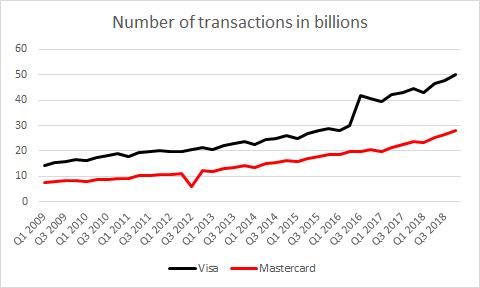 Visa managed to greatly boost the number of transactions it process throughout the past decade. Its major rival - Mastercard - also significantly expanded its operations but the pace of growth lagged the one of Visa. Source: XTB Research, Bloomberg

Visa’s core business has many pros and a few cons. Setting up a brand new payment processing network is costly and incentivizing merchants to switch to it may be even harder. This high barriers to entry make Visa’s industry a rather closed one. Moreover, after setting a network costs of maintaining and upgrading it are small allowing Visa to save money for distribution to shareholders or acquisition of new entities. The former is especially true for the company as it managed to increase dividend payout every year since its debut and is carrying out significant buyback schemes each year. At the end of 2018 Visa had almost $15.9 billion in cash or cash equivalents while its debt load stood around $16.6 billion. Such a cash buffer makes any adverse change to the level of interest rates unlikely to derail Visa’s business and allows company to continue with its strategy of taking over potential competitors before they grow big. Last but not least, one of the most juicy facts about Visa’s business is its insane scalability. As Visa charges a percentage of each transaction its revenue can be viewed as somewhat “inflation-immune” as it should rise correspondingly to the changes in the overall price level ceteris paribus.

Visa enjoyed a stable growth of sales in the past 10 years. Company’s profits fluctuated during this period but still are over 18-fold higher than in 2008. Apart from that, Visa has insane ability of free cash flow generation. Not many companies can boast that they are able to generate around 0.6 USD of free cash flow out of each dollar of revenue. Source: XTB Research, Bloomberg

Visa reported its fiscal first quarter (calendar fourth quarter) earnings on Wednesday, 30 January. The company managed to beat market expectations of earnings and revenue. Net income rose 17.39% against previous year to $2.977 billion while revenue jumped 13.25% YoY to $5.506 billion. Moreover, EPS grew even more than net income - 20.37% YoY to $1.3 - due to extensive buyback programmes we have already mentioned earlier. Volume of all payments rose 11% during the final quarter of 2018 while volume of cross-border payments increased 7%. Number of transactions grew 12% YoY and came in just shy below 50 billion mark. When it comes to forecasts for 2019 the company remains optimistic. Visa expects full-year EPS for 2019 to grow by “mid-teens” while revenue is projected to experience “low double-digit” growth. Note that during the past 5 years Visa has missed just one quarterly revenue forecast and managed to provide higher-than-expected earnings in each of those 20 quarters.

Equity analysts are optimistic about Visa’s future. Out of 42 analysts following the company 37 recommend buying the stock while 5 of them graded the company “neutral” or “hold”. None of analysts from the group recommended selling Visa shares. Median one-year price target is $161.39 implying a 13.2% increase over the yesterday’s closing price. Source: Bloomberg

However, during the conference call following earnings release investors were offered somewhat downbeat remarks from company’s executives. Management noted that there is a number of risks that may adversely affect consumers spending and in turn Visa’s profits. Among such risk factors Visa named possibility of another government shutdown, uncertainty surrounding the United Kingdom’s departure from the EU as well as trade wars with China. Speaking of China and trade wars, it should be noted that there is also scope for a profit boost for companies like Visa or Mastercard. Since the talks started (and even before that) the US administration often expressed their desire for China to be more open to foreign companies. Such opening could be especially pleasing for payment companies as UnionPay, the Chinese financial services firm, holds a state-enforced monopoly on yuan-denominated card-based payments. Of course, even if China opens to foreign payment firms in this field it is unlikely that Visa or Mastercard will win a lion’s share of the market immediately. Nevertheless, as UnionPay holds a monopoly it is set to lose on entrance of any competitor and this is a chance for Visa.

To put Visa’s financial ratios into context it is wise to compare them with ones of its biggest competitor, Mastercard. These two payment companies are the biggest in the world, spare for aforementioned UnionPay, and process over half of all transactions conducted outside of China. Visa had way higher operating and profit margins in 2018 than Mastercard and the average for the peer group.The company also manage to provide higher return figures than peer group median but lagged stellar results Mastercard achieved in the previous year. Visa was the least indebted company in its industry in 2018 and had cash position equal to around a half of its total debt. When it comes to the effective tax rate Visa’s tax burden was slightly higher than average and median for the peer group. There are a few metrics that make Visa shine among its competitors. First of all, Visa is the biggest company by market cap in its industry. Investors also value Visa’s earnings more than those of its competitors as highlighted by above average EV/EBITDA ratio. Last but not least, Visa spends the biggest portion of revenue on investments what may allow the company to uphold its superb performance in the years to come.

Visa (V.US) stock took some beating in the final quarter of 2018. Nevertheless, the company managed to regain most of the losses made since. Share price recently rebounded off the support zone ranging $133.60-135.20 and is heading towards the $145.50 handle that limited upward price moves November and December. Source: xStation5

Uber (UBER.US) stock dropped more than 5.0% during today's session as the emergence of a new COVID-19 strain in South Africa raised concerns of fresh...

Virus is once again on top of the agenda following a massive sell-off on stock exchanges on Friday. Investors fear that new, more dangerous variants will...