It’s been a pretty volatile week for US stock markets, with equities taking a hit on some trade concerns and soft data in the first couple of sessions, but the recent release of an all round stellar jobs report from the world’s largest economy has boosted sentiment and pushed indices higher. Futures are pointing to a green open for all US benchmarks and the S&P500 is now trading back above the level it was at 3PM on Monday when the disappointing manufacturing figures dropped.

Looking at the jobs data itself it’s not only hard to find any weakness but hard to find anything that isn’t strong with a large beat on the headline, upwards revision to the October data, and unemployment rate falling back to its lowest level in several decades. If you want to nit-pick you could say the M/M wage growth was a tad lower than expected, but this is more than offset by a better than forecast Y/Y reading and overall there’s little disputing the strength of this release. 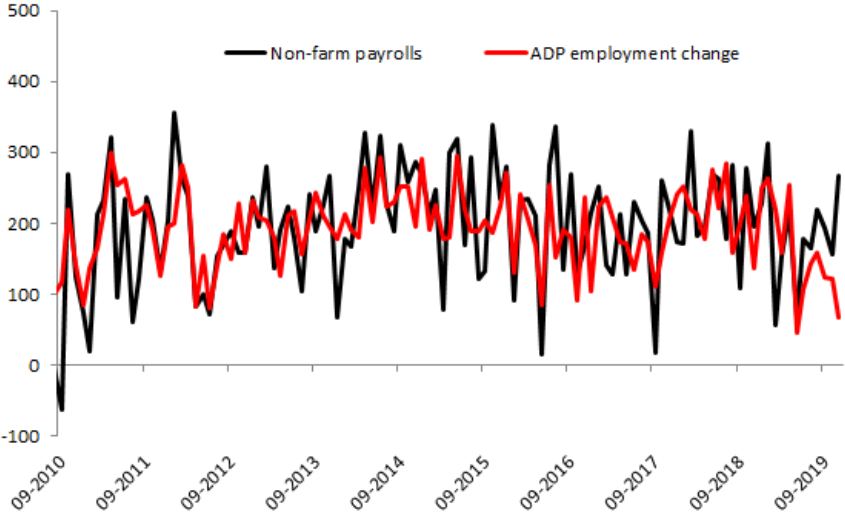 There’s a big divergence between the ADP and the NFP release with the former falling sharply in November while the latter soared. Source: XTB Macrobond

After the softness seen in the ISM manufacturing data and the private ADP, expectations were pretty low heading into this but these have been blown away by a stunning release. In fact, you could even say this is potentially too good and if we get a resolution on the US-China trade situation in the coming weeks then the pressure may start to ramp up on the Fed to raise rates once more. However, that may be getting a little ahead of ourselves, but it’s clear that this strong data point is a clear positive for US indices and the US dollar in the near term.

The US500 has soared since the NFP release and is set to be firmly in the green at the start of the cash session. The market is now back at the 78.6% fib of the decline around 3139 and a break above there could see another tilt at all-time highs before the week is out. Source: xStation