Price pressures in the UK rose faster than expected in July with the CPI Y/Y coming in at 2.1% against a consensus forecast of 1.9%. The core reading also ticked higher by 10 basis points to 1.9% against an expectation for no change. With the Bank of England recently stating that they were to become more data dependant this latest release could well be seen as supporting a hike with the headline reading now back above the 2% threshold for only the second time this year. 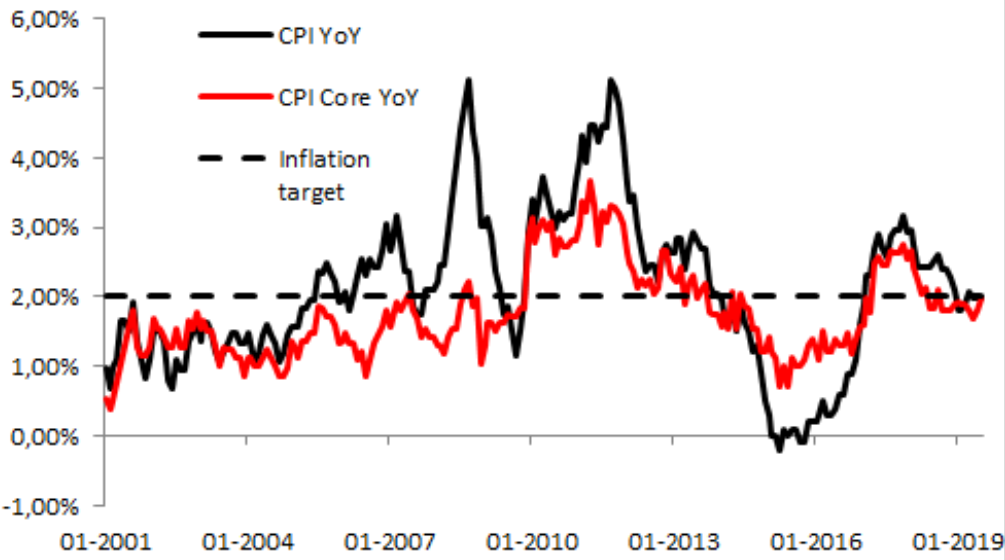 UK inflation has ticked up in July and remains close to the BoE’s 2% inflation target. Source: XTB Macrobond

Having said that, despite Governor Carney’s insistence that the Bank’s next move could be either higher or lower the consensus opinion remains very much that they won’t move before the October 31st Brexit deadline, and the most likely move after that would be to cut rates. As such this data will unlikely provide any lasting upside in the pound and the currency continues to languish around the recent lows just above the $1.20 handle.

GBPUSD continues to trade near recent lows after ending last week with its lowest closing price since 1985! Source: xStation

There were some sharp moves across several asset classes Tuesday afternoon with equities, oil and USDJPY surging while bonds and precious metals tumbled after the US Treasury announced a delay to some new tariffs on consumer goods that were set to take effect at the start of next month until mid December. There was also a decline seen in Bitcoin with the cryptocurrency continuing to exhibit an increasingly positive correlation with Gold. The decision represents a potential thawing in the frosty US-China trade tensions and with more talks set before the month is out there is the potential for more progress in the coming weeks. As of yet it remains to be seen whether this change of stance has a lasting impact on the markets with there being a lack of follow through thus far.

Any overexuberance was kept in check overnight with the latest round of data from Beijing showing a further slowdown as both industrial production and retail sales in China fell further than expected with the former hitting its lowest level in 17 years! The current session for risk assets could well prove pivotal; further gains and higher closes in stocks would go some way to suggest that the recent sell-off is over whereas on the other hand a failure to move above Tuesday’s high would offer bears another chance to push lower.

The US 10-year bond has retraced the bulk of the declines seen after the news broke that tariffs had been delayed. The lack of follow through could be a warning sign that the moves across other asset classes may not last. Source: xStation