The increase in market volatility in recent days affects in particular stock market investors. While some stock indices fell more than 3% today, the Volatility Index (VOLX) is reaching levels not recorded since mid-May. It is therefore worth considering two issues - what caused the decline and where are important levels on the VOLX index, which is often treated by investors as a kind of "insurance" against losses caused by an increase in market volatility (profits from long VOLX position may compensate for losses incurred in trading risky assets such as stocks).

Several factors have influenced the sentiment among investors in recent days. First, there is a lot of talk about the delta Covid-19 variant, which is already spreading all over the world. While the variant does not lead to large numbers of hospitalizations and deaths in highly immunized developed countries, the new virus strain poses a huge threat to citizens, healthcare and economies in developing countries. Thus, the spread of the delta variant raises concerns about the normalization of the policy of central banks, which may want to maintain an ultra-expansionary monetary policy for an even longer period of time - paradoxically, the next wave of infections may be positive for the markets as it may lead to the continuation of the money printing policy.

On the other hand, concerns about inflation are growing among investors - higher than expected readings were shown not only by the US CPI report, but also by inflation expectations among Americans (University of Michigan data from Friday). As a result, many market participants are slowly preparing for the potential stagflation scenario. In view of the recent movements in the bond and stock markets, it can be assumed that some investors are positioning their portfolios taking into account the scenario of slowing economic growth combined with persistently high inflation. Yields on 10-year US bonds have been falling for some time and the so-called reflation trade is clearly fading away.

VOLX index was steadily falling after the pandemic crash in February and March 2020 - local bullish impulses resulted from very short-lived market turmoils. Today's bullish move pushed the Volatility Index above the 22.50 level, which had acted as a support several times in the past, but was finally broken. Recent lows are located around 16.90. When analyzing the volatility index, some market participants take into account the local peak from mid-May (orange circle) as a potential reference point for the future price movements. Source: xStation5 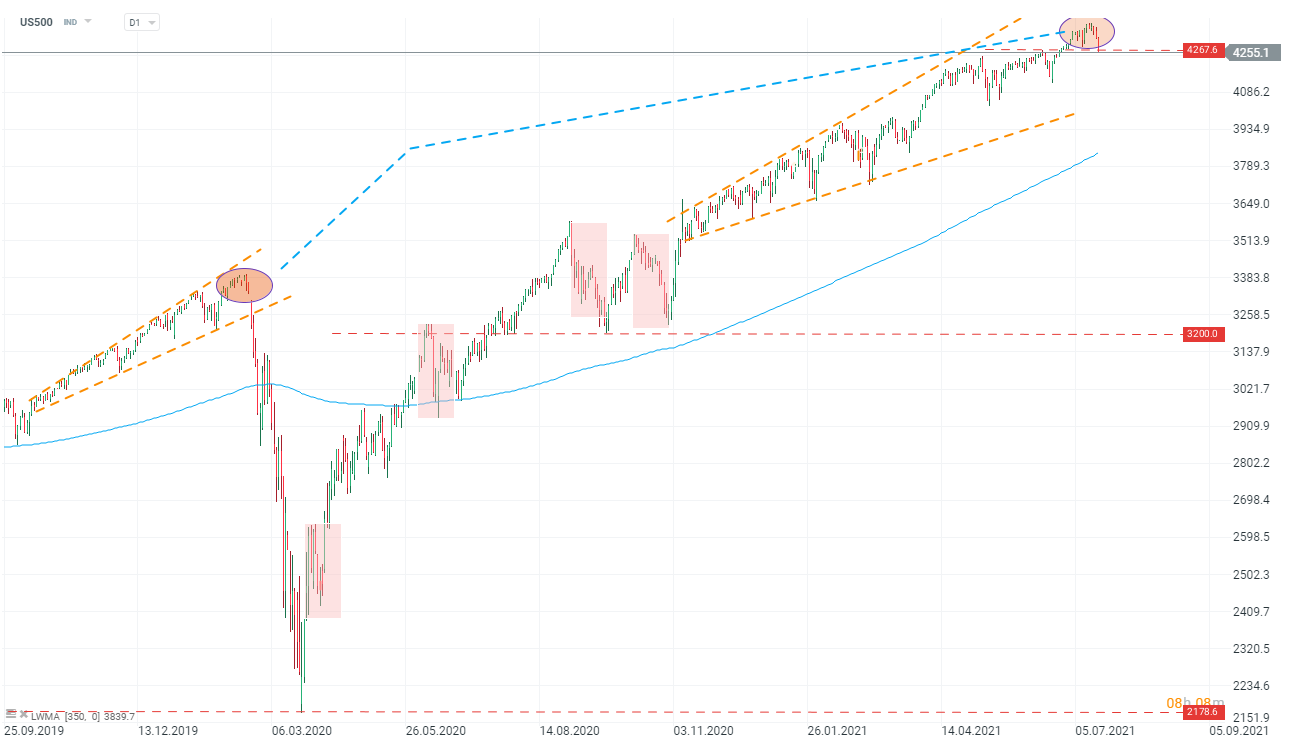 Meanwhile US500 fell over 3% from it's all-time high. Source: xStation5

BREAKING: US Jobless Claims broadly in line with  expectations

The number of Americans filling for unemployment benefits was 0.385 million in the week ended July 31st, compared to the 0.400 million rise reported in...

DE30 rises, but momentum is weak

The German benchmark index fluctuates between gains and losses on Thursday. D1 chart The DE30 has been moving in a short-term uptrend channel for...

❗ What to expect from July's NFP report?

NFP report for July is a key economic release of the week. US jobs data will be released on Friday, 1:30 pm BST and will be closely watched by market participants....