👁‍🗨 What to expect from the Fed?

The US Federal Reserve has a massive impact on the markets. Indeed, the US central bank could be the key driver behind an impressive post-pandemic rally in equities. The Fed was vocal again in August when president Powell redefined inflation target during the Jackson Hole symposium. How will it affect FOMC decision this week?

Various measures of the economic activity have improved in recent months but employment remains well below the pre-pandemic levels and inflation is still below 2%, offering the Fed a good reason to remain super-accommodative. However, the last 2 months brought the highest combined rise in core (ex-fuels and food) inflation since early 90’s, reversing the covid slump. That reduces the need for more action but it also means that Fed will want to underscore its patience with higher inflation. During the Jackson Hole speech Powell said the Fed would change the way it treats the inflation goal allowing inflation to run above 2% for some time before taking action. We should expect this change to be reflected in the statement. The market does not expect inflation to rise above 2% anytime soon so that means 0% rates for a long time.

Expect these parts of the statement to be changed at the September meeting. Source: federalreserve.gov, XTB Research

These statement changes are now priced in and to impress the markets, the Fed would need to do more – possibly suggesting some further easing. With the Fed and easing it’s “never say never” but this is unlikely for now – the FOMC may prefer to preserve these last bullets in case of economic deterioration.

From the EURUSD perspective it is important to remember about extremely high speculative positioning – a disappointment could easily trigger a dynamic correction. 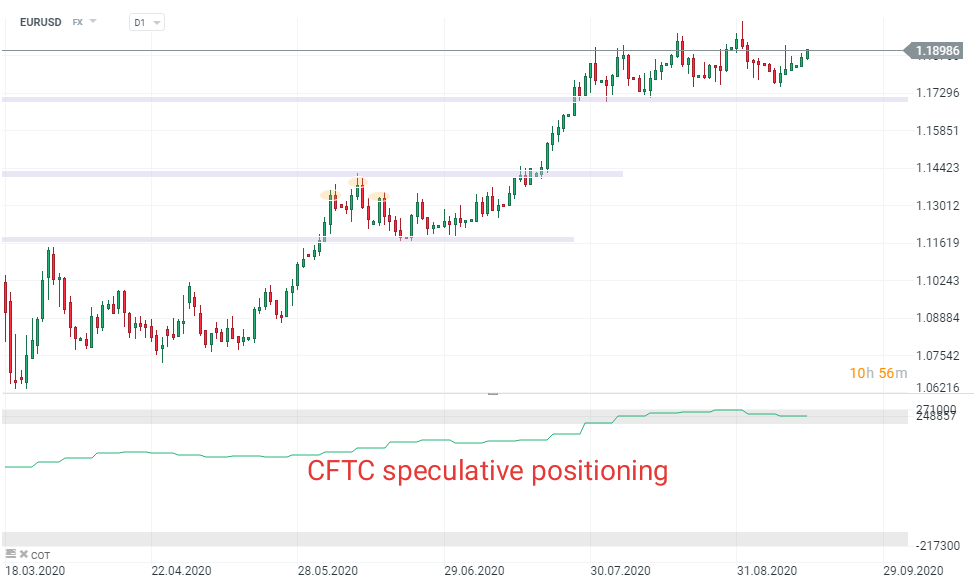 EURUSD is in the upwards trend but speculative positioning remains extreme – a clear risk for the bulls. Source: xStation5

US100 managed to defend the pivotal support line at 10930 points twice and created a bullish double bottom pattern. Having said that it’s worth recall the June meeting when markets tumbled despite very dovish FOMC message.

The Institute for Supply Management's (ISM) Manufacturing PMI in September declined to 55.4 from 56.0 in the previous month. Today’s reading...