What's next for oil?

Prices of WTI and Brent increased over 30% in November alone. WTI price jumped above 45 USD per barrel while Brent crossed 48 USD mark. Both benchmarks reached the highest levels since March, when the oil market was haunted by a massive sell-off triggered by the collapse of the OPEC output cut deal and demand destruction caused by the coronavirus pandemic. Gains that can be observed at the moment are driven by speculation over further actions from OPEC+ as well as promising news on coronavirus vaccines. Additionally, stabilization of the political situation in the United States hints that another relief bill may be coming and it should boost activity of consumers and companies. In our analysis we will outline current balance of risks that are related to high prices as well as prospect of increased supply due to geopolitical factors.

Currently it looks like we have not just one but three coronavirus vaccines with promising results - developed by Pfizer, Moderna and AstraZeneca. Having said that, there is high likelihood that at least one of them will be approved for use. Moreover, the fact that those vaccines are being developed by three different companies hints at higher production capacity. Of course, it still remains in the realm of rumours and speculation but markets are thirsty for good news. Nevertheless, until vaccination begins and a significant improvement is spotted in terms of, for example, mobility, demand outlook remains unchanged. In fact, it is even possible that demand will deteriorate in the near future given returning coronavirus restrictions. 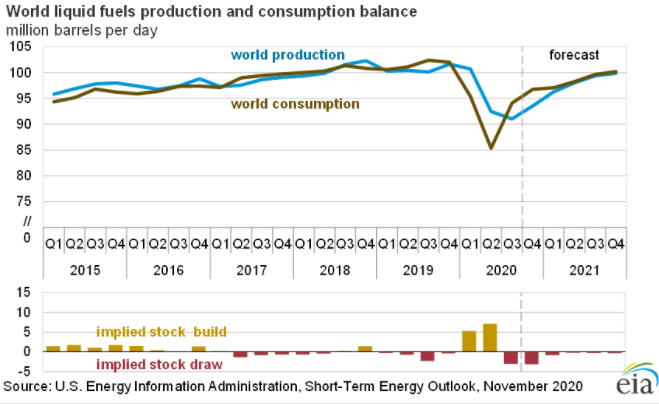 EIA still expects that the ongoing crisis leads to an implied reduction in oil stocks around the world. US inventories have been in fact shrinking as of late. However, OPEC knows that it will take time for demand to recover therefore further supply cuts look likely in order to keep prices relatively high. Around 10% of refinery capacity remains unused at the moment. Rystad Energy data shows that this figure stood at 2-3% prior to the coronavirus pandemic. Source: EIA

Market consensus expects OPEC+ to extend output cuts of 7.7 million barrels for 3 months. In our opinion, this is the most likely scenario and the group may meet again in March to revise the deal. Extension of 6 months that was priced-in before vaccine news hit the markets could be seen as a short-term positive for oil prices at the moment. Extension of 3 months should keep prices at relatively high levels for a moment. We can expect some profit taking should OPEC+ go with such a decision. However, the decision itself is not to be taken for granted. Iraq or UAE do not want extension, and some countries may be fine with oil prices of around $50 per barrel. Tapering of 2 million barrels in January would be a bearish signal for prices. OPEC+ will make a decision on the extension of oil output cuts on Nov. 30 and Dec. 1.

Political stabilization in the United States can be treated as positive news for oil. Promise of a $2 trillion fiscal stimulus should boost demand in the world's biggest economy. In theory, Biden could also limit shale sector activity, what should limit supply. Nevertheless, such a decision should not have a material impact on production. Production is likely to be dependent on crude prices. We can see a rebound in the number of active oil rigs in the US at the moment and it could lead to a jump in production over a few-months horizon. Additionally, production facilities in the Gulf of Mexico should restart production following hurricane season. It is estimated that production of 700-800k barrels per day was lost during the summer period.

On the other hand, Biden win means that oil supply is likely to increase in the future. Mostly because of returning of Iranian supply but attempts of improving relations with Venezuela will also play a role. Iran's potential production and exports could be as high as 2 million barrels per day. Attempts to restore the nuclear deal will be a significant drag for prices.

Last but not least, Biden win may not only lead to increase in supply over the long-term but also to lower demand due to its climate agenda. Rystad Energy expects global oil demand to peak in the coming year near 103 million barrels per day (currently at 90-95 million barrels).

Iran's oil production and exports potential could be as high as 2 million barrels per day. Iran needs cash while it holds a lot of oil in offshore storage. China and India could quickly consume Iranian supply should sanctions get lifted. Source: Bloomberg 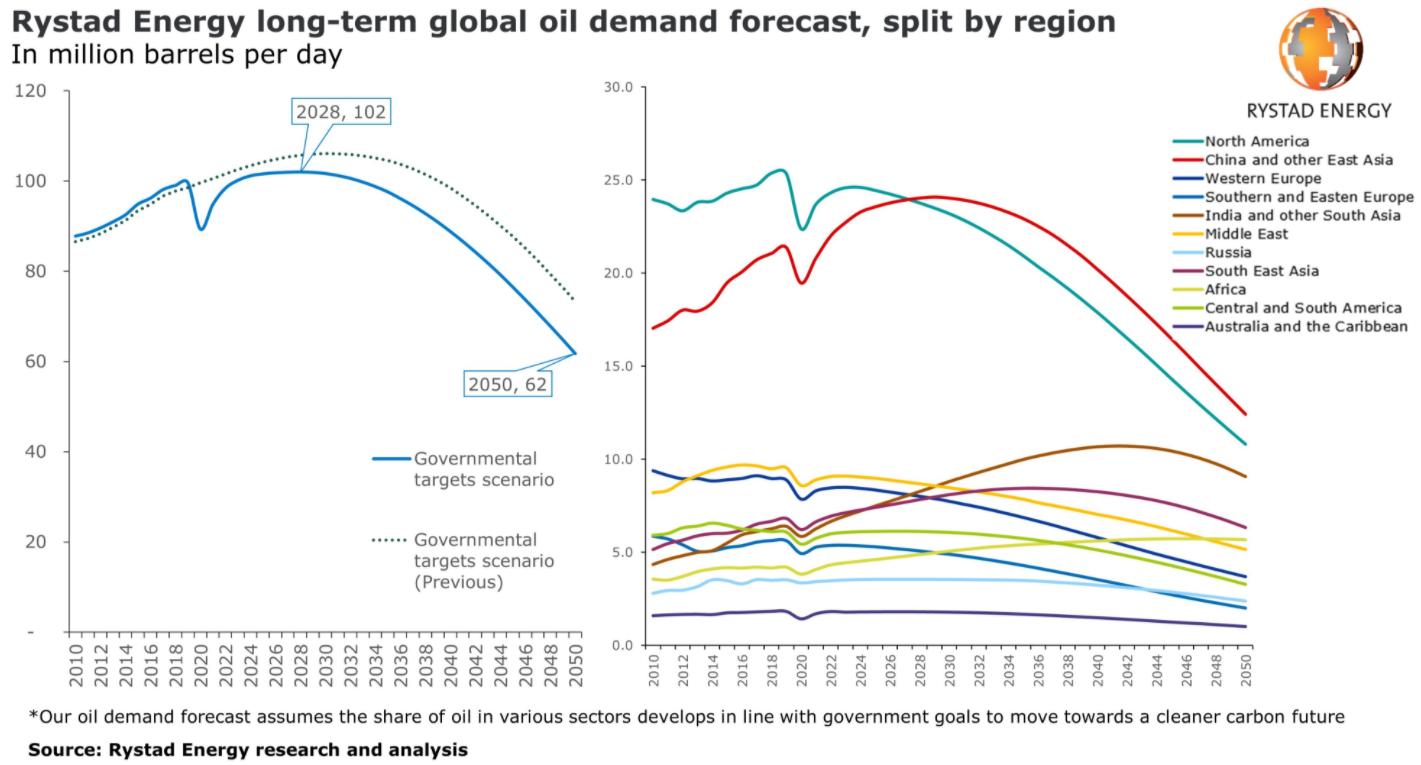 Rystad Energy expects a quick reversal away from oil. It should be visible especially in the United States, Europe as well as Middle East countries. Source: Rystad Energy

What's next for oil price?

Oil prices are very high at the moment. More positive vaccine news or expectations of OPEC+ actions could see prices rise by an additional few US dollars per barrel. In such a scenario, Brent price could jump above the 50 USD mark. However, the current fundamental situation does not support such levels. Because of that we see some profit taking as a likely option in the near future and a period of a range trading afterwards. Breaking below the upward channel could be a signal favouring such a scenario.

Oil trades at the highest levels since March. However, fundamentals are not supportive and prices are currently driven mostly by speculation. Having said that, there is a risk that some profit taking may take place in the near future. Source: xStation5