Bitcoin's price is moving in a sideways trend and holding below the $17,000 level. We will have at least a couple of volatility catalysts in the coming days, the earliest of which is tomorrow's expiration of $320 million worth of positions in the options market. Two others are the U.S. inflation reading on Tuesday and Powell's decision and speech on Wednesday, which has traditionally caused wild volatility among risky assets, including the cryptocurrency market. 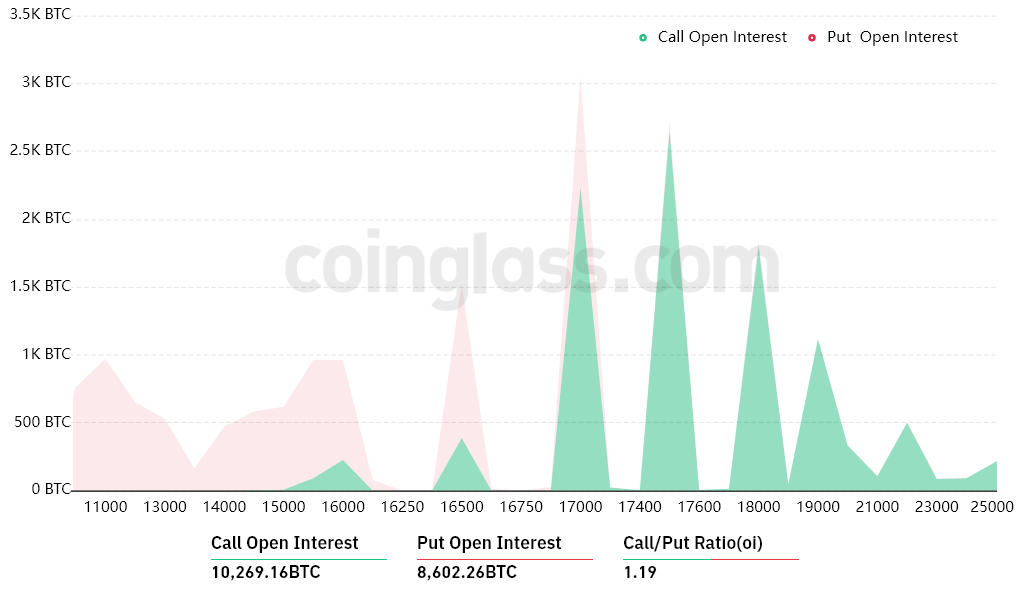 Open interest in the BTC options market indicate that bearish traders have exaggerated the downward scenario by betting on price declines well below $16,500. If BTC holds at current price levels, Friday's options expiration has the potential to cascade the supply side of the options market which could potentially help bulls to take Bitcoin to new monthly peaks. Source: Coinglass

A CNBC survey conducted from November 26-30 showed that 24% of Americans have invested, traded or used cryptocurrencies in the past, up from 16% in March. According to CNBC, the survey's marignes of error was about 3.5% with a comparison of the March results from NBC News:

CNBC's survey indicated that Americans' attitudes toward cryptocurrencies have definitely deteriorated since March, which is actually not surprising - it's been the same in each of the previous down cycles. By nearly 65%, the number of positive votes fell. The ratio of negative votes definitely increased, it amounted to 43%. Source: All America Survey, CNBC

Bitcoin chart, H4 interval. The price of the major cryptocurrency is moving in a narrow range between the SMA 100 and SMA 200 averages, and we can see how both averages are aiming for the intersection known as the 'golden cross', which is usually a very bullish formation that works with a lag (the price starts to rise before the cross becomes visible). Particularly noteworthy, therefore, is the SMA 100 (black line), which is currently aiming to cross the 200-session average from below. The behavior of both averages indicates a chance, for cryptocurrencies to return to growth next week. Probably necessary for this would be a reading of falling inflation in the US. Source: xStation5

Technology-heavy bourses continue to move higher on Thursday, extending a Fed-induced rally, with the Nasdaq 100 and the S&P 500 advancing 2.5% and...

Apple, Amazon and Alphabet reports are coming ⌚ What to expect from BigTech?

Wall Street's biggest companies will show financial results for Q4 2022 today after the session. The market will pay particular attention to device...