• Bitcoin is testing $11,100  resistance level
• Growing correlation between Bitcoin and gold
• Ripple become the third most valuable crypto asset
After weeks of stagnation on the cryptocurrency market things have finally kicked off and the major coins started to rally. Both investors and holders welcomed higher volatility  as the rally seems to be persistent and growing. Bitcoin with ease managed to break above $10,000 and is testing $11,100 level. This is positive not only for Bitcoin, but also for the whole market as other altcoins continued their rally from last week. 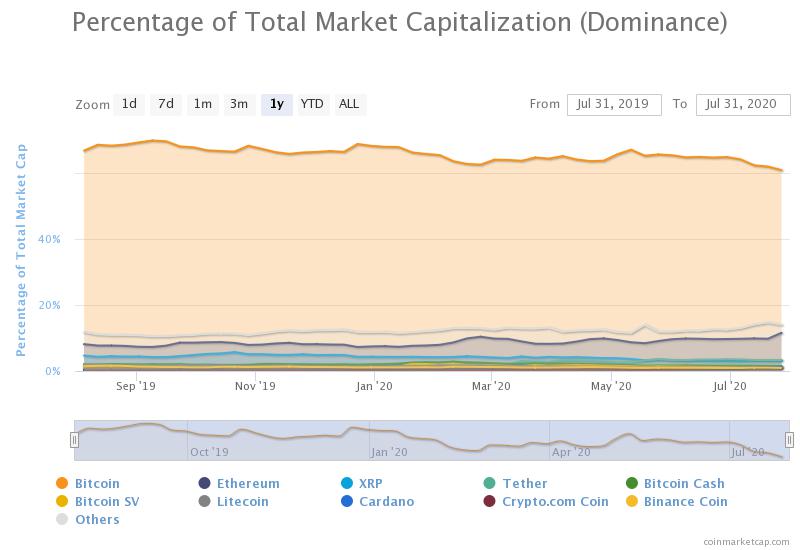 Bitcoin's market dominance decreased to 62.3%. The capitalization of all digital assets in circulation increased to 327.9 billion from reached almost $284 billion last week, while an average daily trading volume is registered at $82 billion.  Source: Coinmarketcap
Correlation between Bitcoin and gold highest since November 2018
Bitcoin reached its 2020 high of $11,354 this week and its correlation with gold jumped and at the moment stands at 0.66, according to data from CryptoCompare.  The correlation returned after gold managed to break above $1900/oz  last week that sent it  to the new highs.
According to James Li, a research analyst at CryptoCompare:
"Last time Bitcoin had a moderate correlation with gold (around 0.5) was towards the end of 2018. That was when a month earlier in November 2018 bitcoin suffered a 50% drop (at the height of the bitcoin cash war) and made some subsequent rebounds. Gold was recovering from a somewhat cyclical drop a couple of months earlier. The moderate correlation back then was perhaps a bit of a coincidence".
Bitcoin’s correlation with gold may strengthen its position as an anti-inflation asset at a time when central banks and governments around the world have introduced massive stimulus packages to save their economies from the impact of the Covid-19 pandemic. 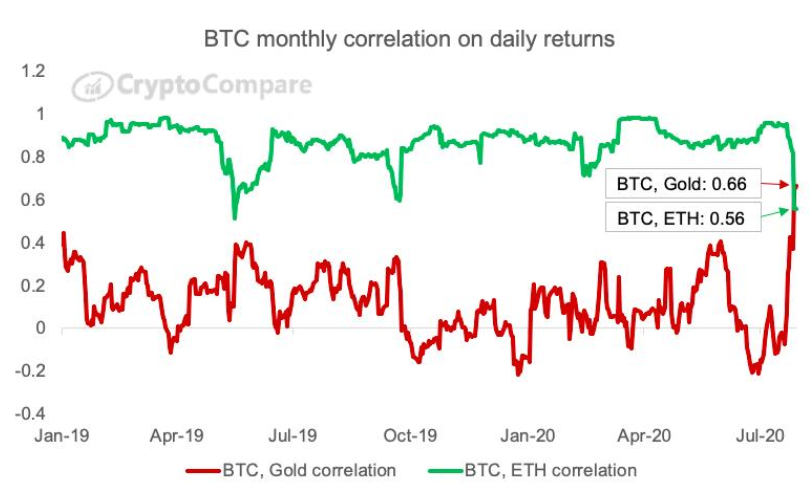 Bitcoin price rallied significantly from a tight range between $9,000 - $9,359 and reached new 2020 highs at $11,354. Currently the most popular coin is testing resistance at $11,100. If positive moods persist, then next target for bulls is located at  $12,258.58. However, in case sellers regain control, round $10,000 level should provide strong support. Source: xStation5
Ripple highest since March
Ripple seems to have joined the crypto market rally and on Wednesday reached its highest levels since the beginning of March.
Ripple has been trading in a tight range for  more than 2 months with its volatility at its lowest levels. During this period coin did not attract interest, but now the coin becomes valuable again. Since mid-July, the number of wallets holding 1 million to 10 million Ripple has been steadily increasing. Ripple surpassed Tether and become the third most valuable crypto asset in dollar terms, at around $11 billion.  There is no clear reason behind the recent rally, but Nairmetrics, through its data feed, noticed that some whales increased their stakes in the digital coin significantly.

Ripple jumped 21% over the past week and 37% over the past month, making it one of the top performers. Coin managed to break above the major resistance level at $0.2258 and rally. Should upbeat moods prevail resistance at $0.2609 may come into play. However if a break below occur, then local support is located at $0.2060 level. Source: xStation5
Share:
Back