In recent years, Adobe Systems Inc. (ADBE.US) was one of the best performing companies in the United States posting high growth rates. It has financial muscle and the potential to grow at a high rate, but the company is not recession-proof. The share price could be correctly valued today, but that does not imply that the corrections will not continue. 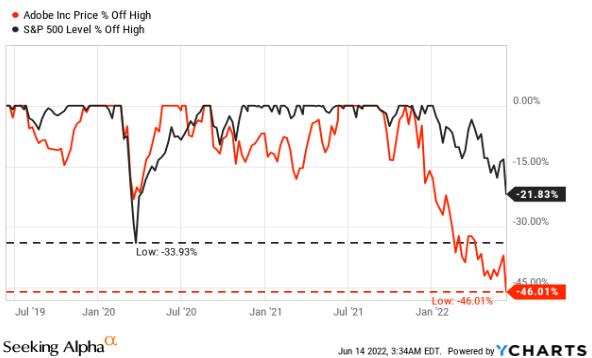 And especially given that Adobe's stock price has been falling nearly 50% and has clearly underperformed the S&P 500 (US500) in recent months, the stock and the company might be worth a closer look to determine if We must take this value into consideration at the time the market bottom is reached.

It is one of the largest computer software companies in the world. It was founded in 1982 and currently has about 26,000 employees and generates about $16 billion in annual revenue. Like many other software companies, Adobe offers its products primarily through a software as a service ("SaaS") model. It offers software, especially for graphics, photography, illustration, animation, and multimedia/video. And among its most popular products include Adobe Photoshop, Adobe Illustrator, and Adobe Acrobat Reader, as well as the world's most widely used portable document format, PDF.

It focuses on three different segments:

And after Adobe changed its business model in the last decade, similar to many other software companies, most of the revenue now comes from subscriptions ($14.573 million or 92% of total revenue).

While the results remain strong, we cannot deny that growth rates are slowing down. And especially the guidance for fiscal year 2022 should not make us optimistic. Adobe now expects total revenue to be $17.65 billion (versus $17.9 billion in its previous guidance) and earnings per share (non-GAAP) is now expected to be $13.50 instead of $13. 70$ from the previous guide.

And while quarterly and full-year results are important, we should view these numbers as points only, which are part of a larger picture. With a long-term perspective, we are quite interested in long-term trends and the results of a single quarter do not tell us much about these trends. Adobe is certainly optimistic that these high growth rates will continue, and in the coming years, Adobe is not only focusing on creating and leading categories, as well as offering technology platforms, but is also trying to expand its customer base. And these aspects combined could lead to high growth.

Also seeing a huge addressable market for your different segments. Creative Cloud TAM, for example, is expected to reach around 63 billion in 2024 and is also expected to grow at a high rate from 41 billion in 2023.

And analysts also seem quite optimistic for the next few years. Between fiscal 2022 and fiscal 2026, analysts expect share earnings to grow at a CAGR (Compound Annual Growth Rate) of around 15%.

But analysts and company management might be overly optimistic about Adobe's growth rates for the next few years, as well as the potential market in 2024. And we can mention at least two reasons:

First, we shouldn't expect Adobe's current high-growth phase to continue forever. Although Adobe was able to increase its earnings per share at a CAGR of 15.67% since 1990, there have also been times when earnings per share stagnated or declined. And while we don't have clear indications that growth will slow dramatically in the next few years, we shouldn't ignore that possibility either.

Looking at Adobe's performance during recent recessions, we can see that revenue and earnings per share decline in the quarters following a recession. We can also see that Adobe could pick up again in a few quarters. 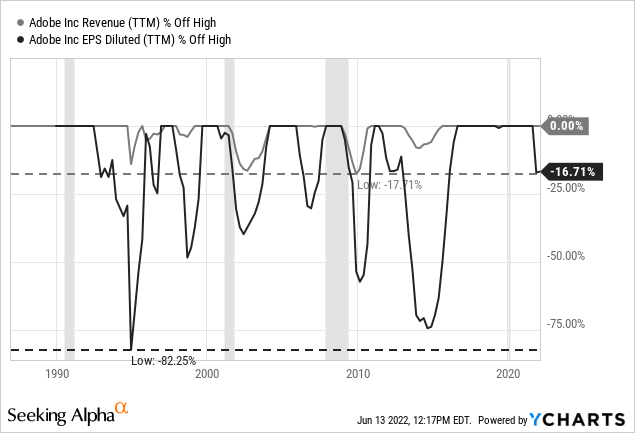 Second, the recession could put an end to the extremely high growth rates that Adobe has experienced in recent years. Adobe was also able to grow at a high rate before the Great Financial Crisis and the recession of the years 2008 and 2009 also stopped Adobe from growing at a high rate and the following years were pretty mediocre. One could argue at this point that Adobe is a different business today because of the subscription business, but I don't know if that will make much of a difference.

Adobe's economic floor is also visible when looking at some numbers. We can start by looking at the extreme outperformance of the stock over the last 4 decades. While the S&P 500 has gained 1,520% since the mid-1980s, Adobe has gained 18,660% in the same time period. 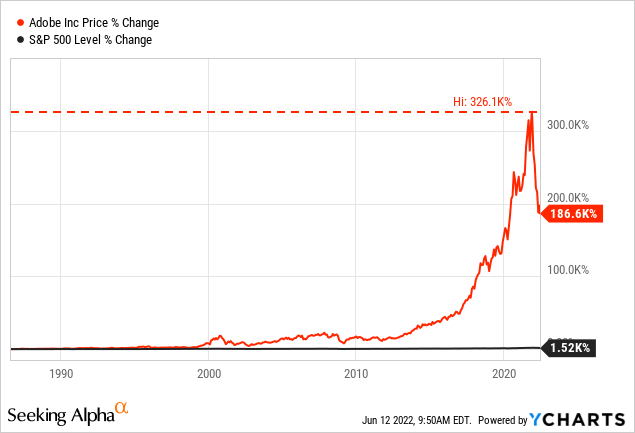 In addition to stock performance, we can also look at the company's margins. Adobe doesn't just have extremely high gross and operating margins. Especially the operating margin could improve in recent years, which is a good sign. Additionally, Adobe posted a high return on invested capital (RoIC) and over the past six years, it has exceeded 10%. While the average of the last ten years was 15.68%. 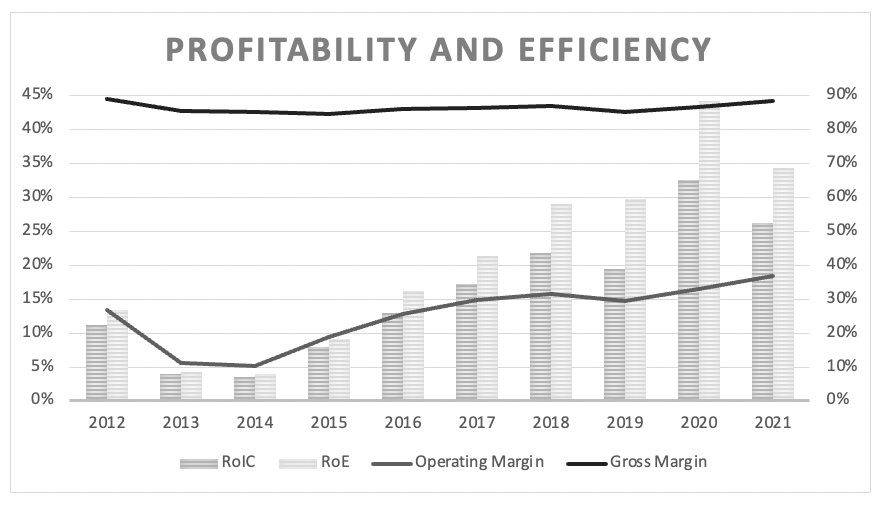 Right now, Adobe is trading at 39x earnings, which is clearly below the 10-year average of 64.33x and, in fact, one of the lowest P/E ratios in recent years. However, a 40x P/E ratio is still lofty on its historical count. Instead, looking at the P/FCF ratio, Adobe is trading for only 27.62x times, which is also below the 10-year average of 33.40x. 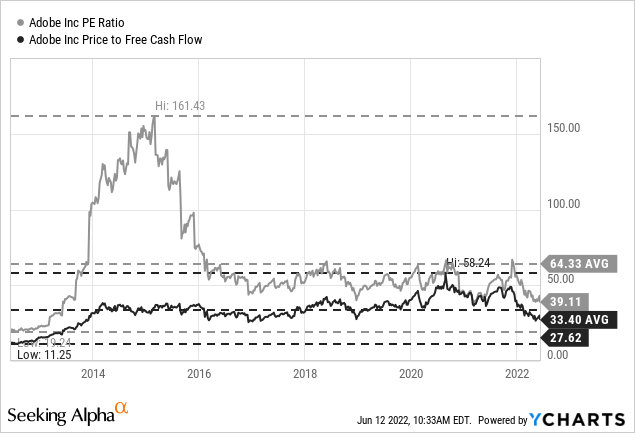 Whether the current stock price and valuation multiples are justified depends very much on expected growth rates for the next few years. For companies that are growing at a high rate, valuation multiples of 30x to 40x may be warranted. And to account for growth rates, discounting cash flows is generally used to determine an intrinsic value.

Although there is no optimistic justification for the coming years. We can always take a bullish scenario and assume that Adobe will not be affected by a recession in the next few years. We assume Adobe can continue to grow at an extremely high rate and estimate 15% growth over the next 10 years, followed by 6% growth into perpetuity. This will lead to an intrinsic value of $677.23 for Adobe and only with this approach alone, the stock would currently be considered a bargain and would be undervalued. Precisely, this level is very close to the all-time highs reached in November 2021.

The stock found support in its main guideline since the 2020 lows and although it recently lost the pre-pandemic highs of $387 per share, in the short term it has developed a bullish divergence composed of higher lows in RSI and lower lows in the stock. of the price.

This signal could mark the beginning of a bullish process as long as the new relative low generated is higher than the previous one. Also, retaking the $387 level would add strength to the upside bounce.

After losing about 50% of its value, the stock could be worth more or less fair at this point. But Adobe is not a bargain, and its business is not exempt from taking a hit in a recession. Considering that a recession in 2023 is an extremely high probability scenario, Adobe is a value to watch, albeit considering the risks, as growth rates are slowing and it is difficult to estimate what growth rates expect.