-----
In recent weeks, we have seen a general decline in Chinese stocks that are traded on US exchanges, notably Alibaba Group (BABA), (NIO), (JD) and (PDD). 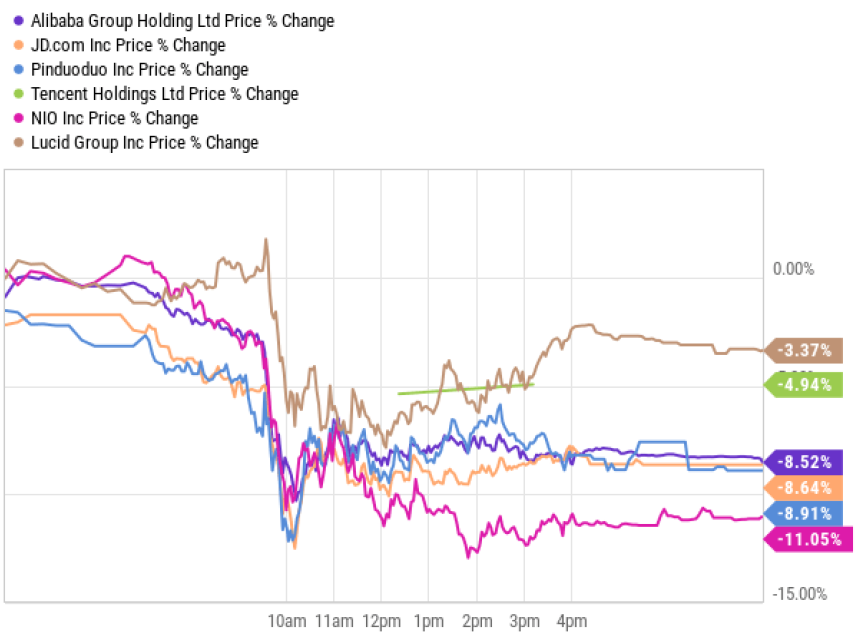 You may already know that the reason for this sale was the announcement that DiDiGlobal (DIDI.US) made about the delisting from the New York Stock Exchange and the subsequent listing of its shares on the Hong Kong Stock Exchange.

DiDi's plans were seen as a reaction to reports that the China Cyberspace Administration had asked company officials to come up with a plan to withdraw its shares from US stock exchanges. Chinese regulators have been cracking down on unilateral action against many of the country's largest tech companies this year over issues ranging from anti-competitive business practices to managing and securing consumer data, and now speculation is likely to grow over whether there will be more Chinese tech companies leaving the American market to go public on local stock exchanges.

Many of the bulls on Alibaba (BABA.US) were quick to assure that a) the delisting risk does not apply to BABA and b) that investors have nothing to worry about in the long term. However, perhaps this second statement has to be taken with care.

China has gone too far with regulation, causing a massive outflow of foreign capital. It's quite difficult to argue with this, especially if we look at the data on China's stock margin balance. 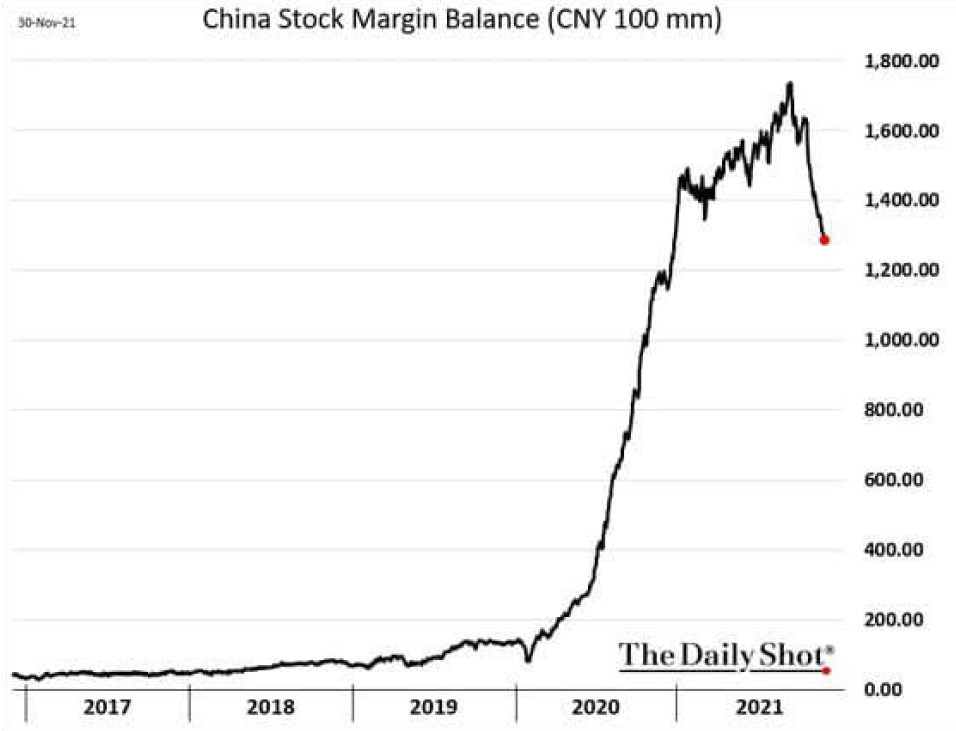 Note the date in the upper left corner of the image above: November 30, 2021, that is, before the latest news on the delisting of DIDI. At that time, BABA shares had already fallen to critically low levels, if you look at the evolution of its P/E ratio: 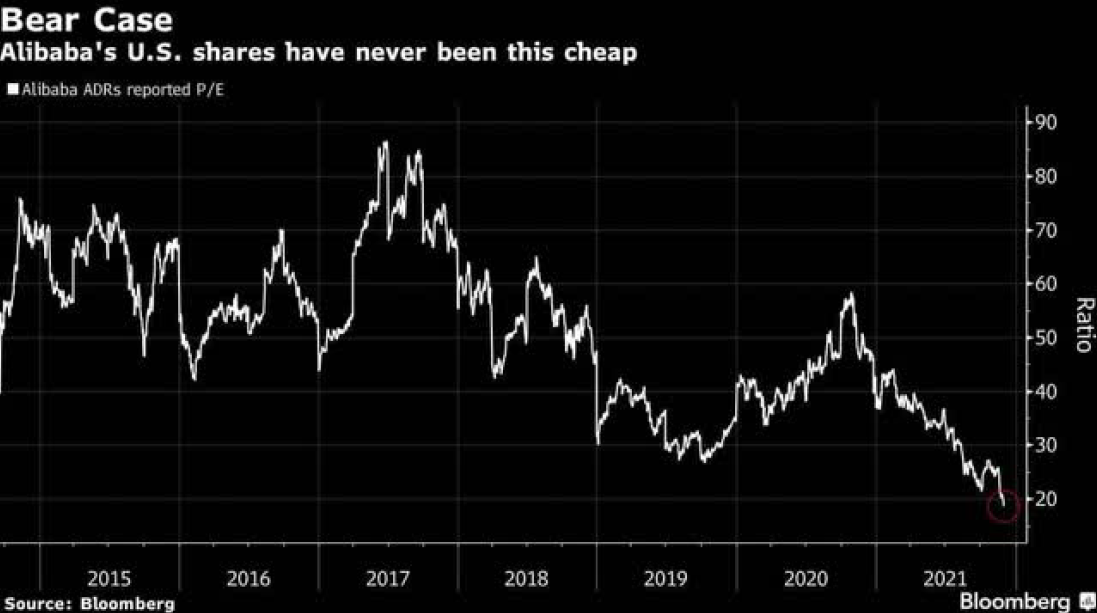 And the dips have confirmed once again that BABA still has a "downside power reserve": 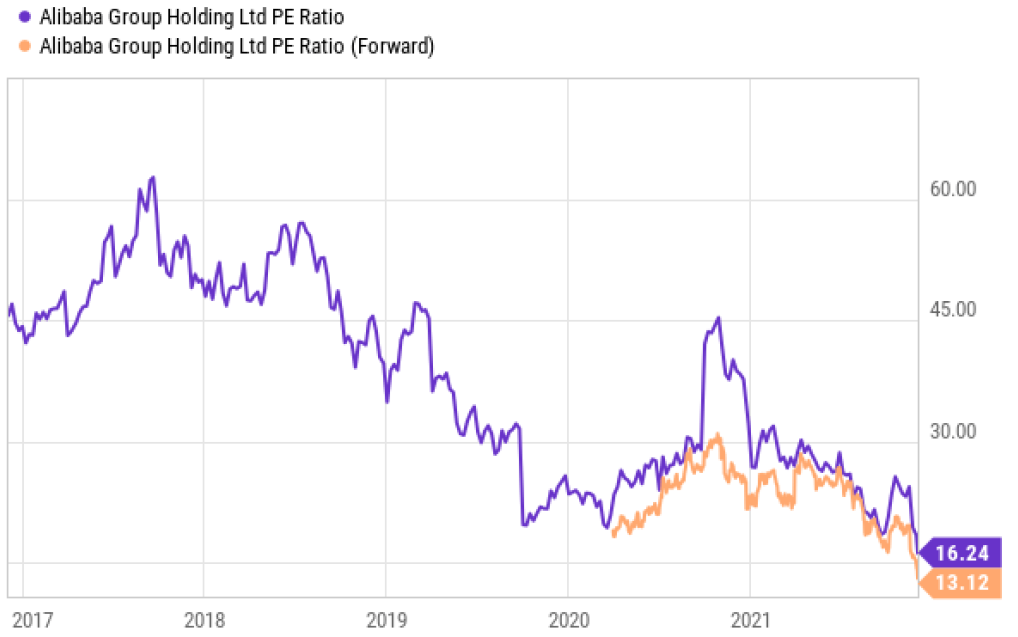 At first glance, it may appear that stocks have fallen quite low in terms of price to earnings (P/E), one of the main arguments bulls use to justify the decline. However, over a longer period, we see that the ratio was already roughly at the same level as it was during the Chinese stock market crash in 2015: 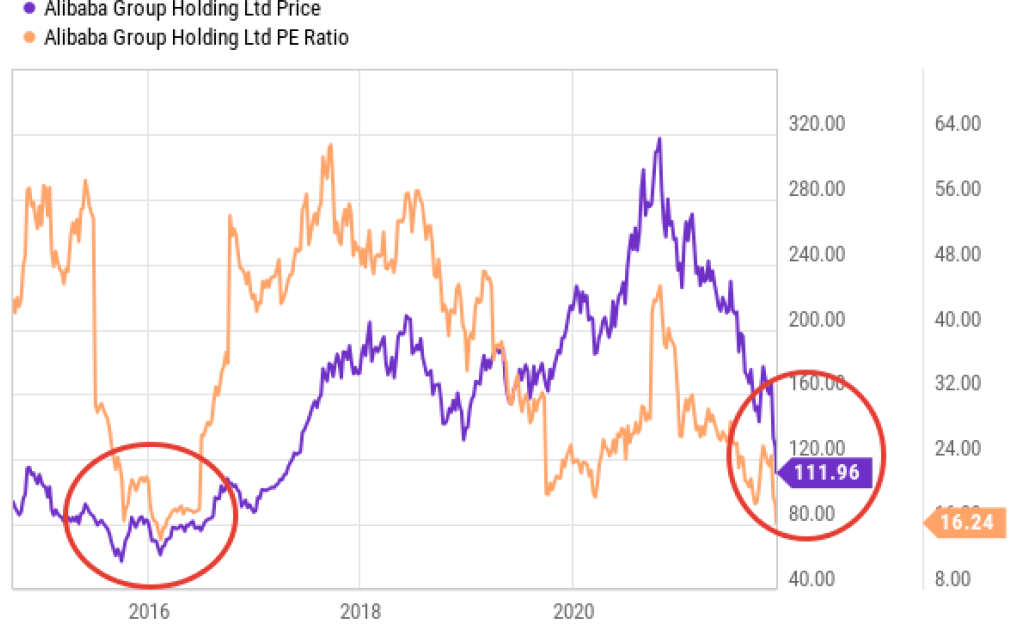 At that time, a bubble was simply inflated that could only burst due to the deterioration of the country's economic growth indicators; at that time, the Shanghai index lost about a third of its value before recovering.

Evergrande Group's struggle to comply with official pressure to reduce debt has fueled anxiety that a potential default could trigger a financial crisis. Economists say global markets are unlikely to be hit, but banks and bondholders could suffer as Beijing wants to avoid a bailout.

Another Chinese real estate firm, Kaisa Group Holdings Ltd., warned on Friday that it might default on a $ 400 million bond due next week, adding to financial strains in an industry struggling to avoid billions of defaults. dollars of debt.

A third of China's property developers will struggle to pay off their debts in the next 12 months, according to a new report, as the sector faces increasingly severe headwinds due to falling sales, restricted access to credit. and a broader recession.

This comes in a context of declining demand for new homes in China. According to Bloomberg, new home sales in four of China's top-tier cities continued to decline in the first week of September (YoY):

Institutional investors cannot avoid incorporating these risks when evaluating their investments in China in general and BABA in particular; therefore, we are witnessing a colossal outflow of foreign capital, which is unlikely to diminish in the short term.

What else can we expect?

In addition to the high risk of a liquidity crisis in China, institutional investors are also watching the behavior of the regulator. The Chinese Communist Party's attempts to control the data that Big Tech collects about its users is a significant advantage for doing business; Without enough data available, it is difficult for the algorithms at BABA and other companies to make high-quality interference with user behavior and recommend products they might be interested in based on that data.

The risk of receiving large fines related to antitrust laws also weighs on companies, as does the competition for the main end market, which is why JD has held up significantly better than BABA in recent months. 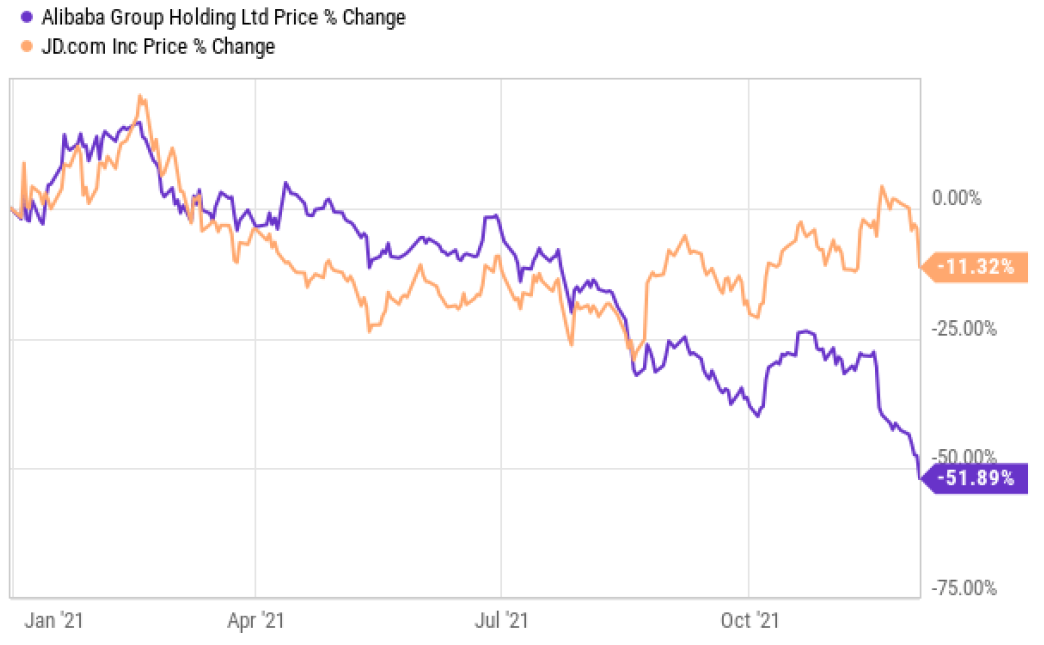 The recent BABA quarterly report also contributed to the market re-rating. Against a backdrop of rising revenues, we saw a drop in the EBITDA margin, which raises many questions about BABA's valuation: perhaps the drop in multiples is justified by weakening profitability and margin levels? 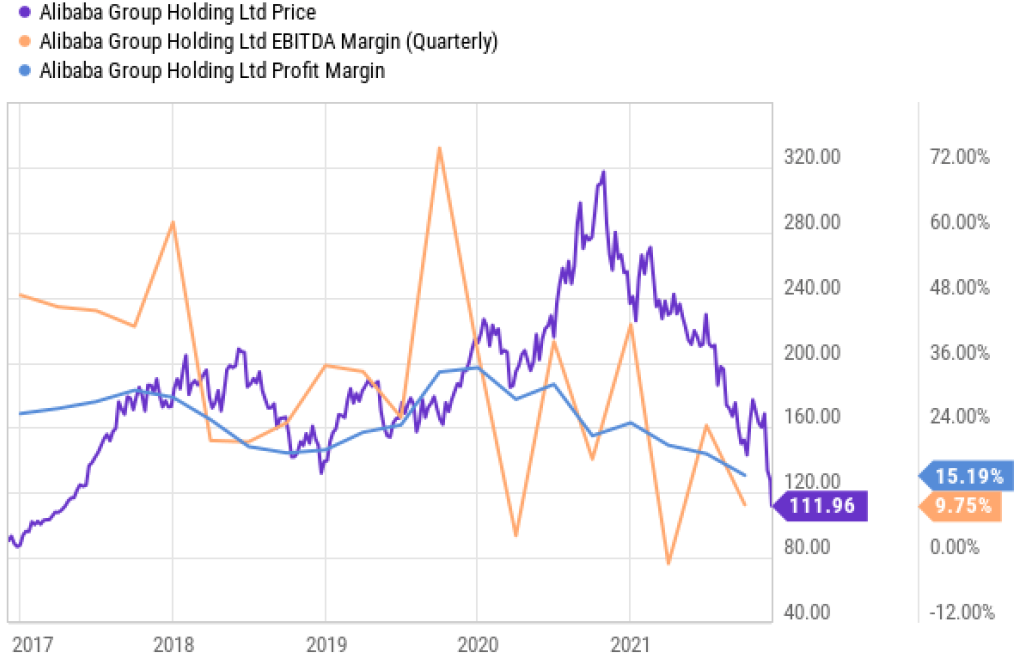 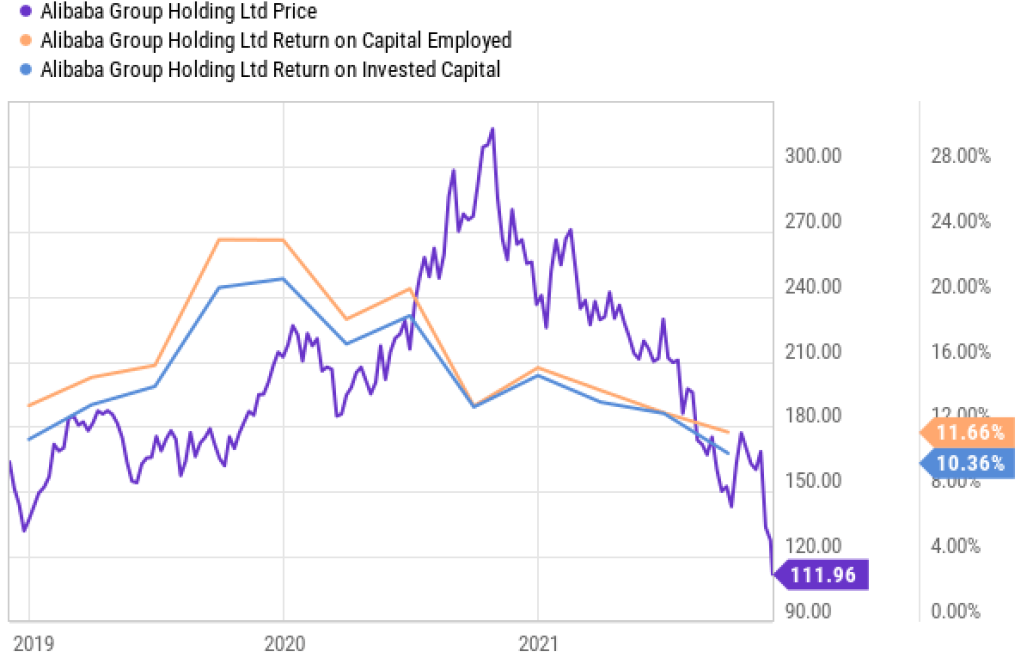 The trend of BABA is not at all favorable, in fact, the recent falls have coincided with the environment of maximums seen during the previous crisis in China during 2015 and 2016. A price below these levels could be worrisome and although compared to the fundamentals can be a good reference, it is still very risky to enter the value.

The problem of Chinese regulation and government interference in technology companies continues to be a factor to take into account, even for the most risky investors.

Considering all the risks outlined above, it doesn't seem like the perfect time to buy the decline that could still continue. It is true that BABA seems very cheap in terms of its market multiples, especially compared to its western counterparts. 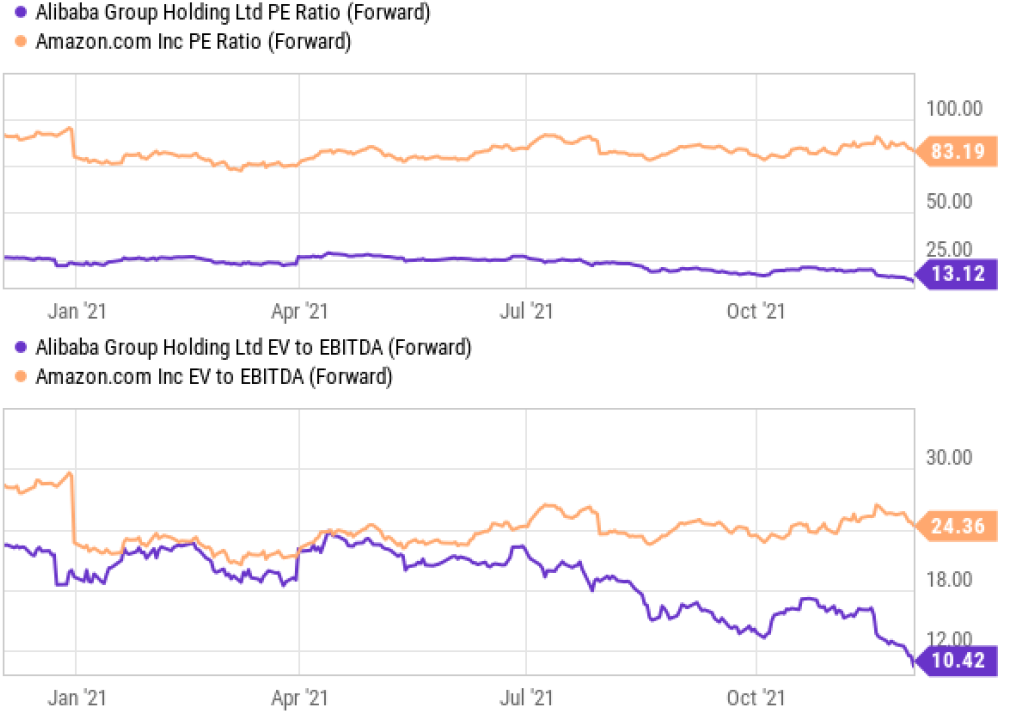 However, such a comparison cannot be considered appropriate, since the difference is in the discount rate applied by investors when discounting future cash flows; Everything seems to indicate that BABA will have this rate x2-x3 times higher than that of its main global competitor, Amazon (AMZN.US).

Amid falling margins and profitability, a purchase could be more speculative, as BABA today could not be considered a “Value” purchase.

In fact, institutional investors continue to close their positions at the expense of those who are "misled" by the apparent "balance" situation of the shares:

On the other hand, many of those who have closed long positions in recent months could be ready to re-enter the context of positive news even if they are insignificant on BABA, precisely because of an "apparently tempting" fundamental undervaluation. But no one knows when exactly the good news will see the light of day.

Everything seems to indicate that China has yet to change its rhetoric regarding big technology such as Alibaba, otherwise, the country's economy will go through difficult times in the face of the liquidity crisis that is developing in the real estate sector.

Flash PMI indices for January from France and Germany were released today at 8:15 am GMT and 8:30 am GMT. While the French release turned out to be more...

The Italian parliament convenes today to begin voting on the next President of the Republic of Italy. Unlike in many Western countries, where citizen vote...