Intel (NASDAQ: INTC) stock has been in trouble for a long time, and its price has not had a clear direction since 2018, as can be seen in the technical analysis image. The important part that justifies this behavior has been the lack of innovation and the loss of market share against competitors such as AMD (NASDAQ: AMD) and Nvidia (NASDAQ: NVDA) in its CPU and GPU business. Options investors are heavily on the downside betting that no change is expected at Intel.

On this premise, it could be argued that the shares are too expensive. In fact, in some past cases of other companies in similar declining profit scenarios, such as Gilead Science and IBM, the multiple could drop to a low of x9 to x10. The graph below shows the year-over-year change in earnings for IBM (NYSE: IBM) and Gilead Science (NASDAQ: GILD) from 2017 to 2020, and shows how the earnings of the two companies receded and the PER multiple contracted and traded. between x9 and x10 for various periods. A PER ratio of x10 would value Intel at just $ 44 (currently trading at $ 54.52) based on 2022 earnings estimates, giving Intel a bearish projection of -19.3%. 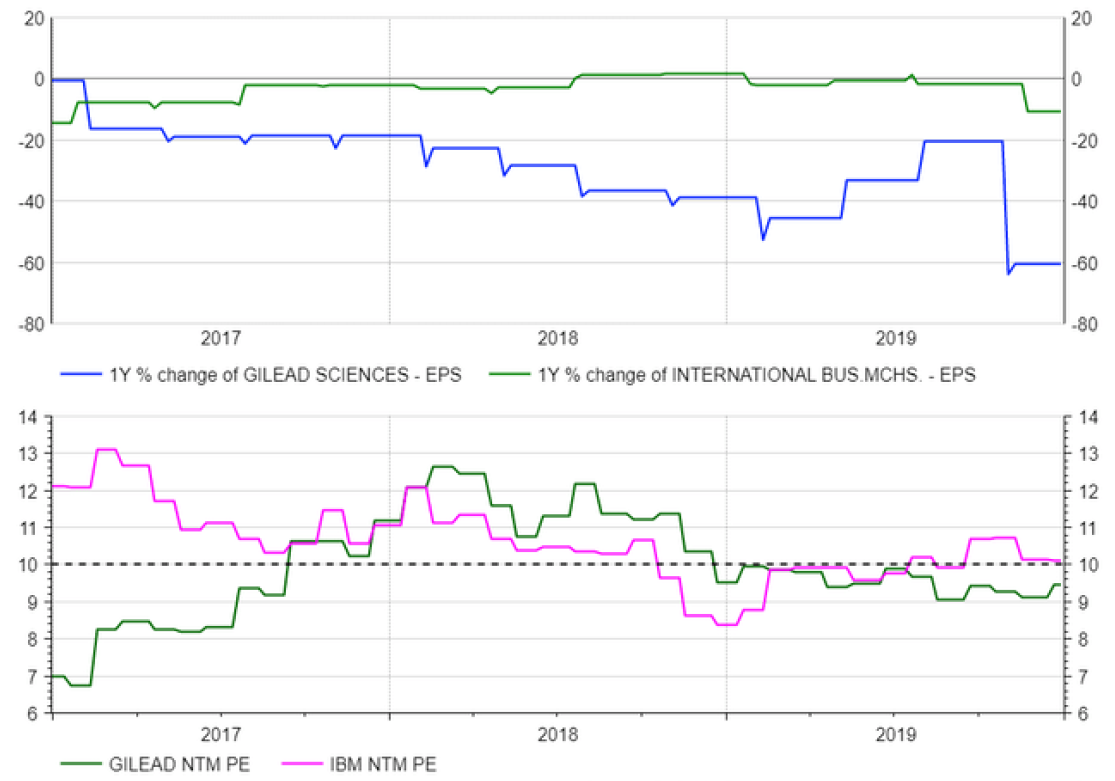 The weak earnings outlook led an options broker to make a bearish bet that the stock would close on the derivative instrument's maturity below $ 53. Open interest for CALL options to $ 60 for November 19 increased by almost 9,300 contracts, while PUT options at $ 60 for the same expiration also increased by around 9,300 contracts. The data shows that the call options were sold for $ 0.43, while the put options were bought for $ 7.35 per contract. These two operations were not a structure to negotiate the spread and it appears that the broker had opened positions for the expiration of October 15 at the strike price of $ 55 for both put and call options. Open interest on the October call and put options was reduced by around 7,500 contracts of each type, indicating that the positions were closed. Ultimately, it creates a bearish trade, with the investor betting that the stock will trade at $ 53 or less in mid-November (remember, it is already trading at $ 54.52).

The stock has been trending up since 2015 and, for now, that trend line has held as support. A breakout of that trend line would be very negative for stocks and send them lower to $ 47.70. In addition, there is now a short-term downtrend that started in April following the release of its Q1 results and which has generated a channel that remains today. Putting bulls on the spot waiting for the breakout to the upside to propel the stock into the $ 57.51- $ 59.57 range.

However, it is worth noting that the RSI, MACD and EMA200 have been trending down in recent months, suggesting that momentum has turned mainly bearish. This would indicate that the selling pressure seen recently on the stock is likely to continue.

We will be waiting this week for your results report next Thursday.

Virus situation and expectations ahead of December's Fed meeting will remain key themes in the markets next week. More data on effectiveness of available...