Is stronger November in China a bellwether of recovery?

A set of economic releases for November from the Chinese economy brought some reasons to cheer as industrial output accelerated to 6.2% in annual terms, the most since June. The reading turned out to be well above expectations and a beat was also seen in retail sales which grew 8% compared to the same period last year. At the same time, fixed asset investment (excluding the rural sector) increased 5.2% in the first eleven months of the year, matching the October’s pace of growth. On the face of it, Chinese industrial production could be a bellwether of a potential recovery in the world’s second largest economy, and this is especially true when we take into account a trade deal struck with Washington last week (not signed yet). On the other hand, healthier retail sales came due to the November Singles Day, a counterpart of Black Friday.

We also see some positives from the US-China phase-one trade agreement as Beijing pledged to increase purchases of US agricultural goods up to $50 billion. These goods include pork, and if it happens at a sizeable scale one may expect that these purchases would alleviate supply-driven price growth in the Chinese economy (surging pork prices accounted for almost 60% of overall price growth in November). Under these circumstances, the PBoC could continue its subtly accomodative monetary policy aimed at reviving economic growth. Therefore, if no material downturn hits the global economy and the US and China keep rolling back tariffs, one may expect that Chinese producer deflation might be over. 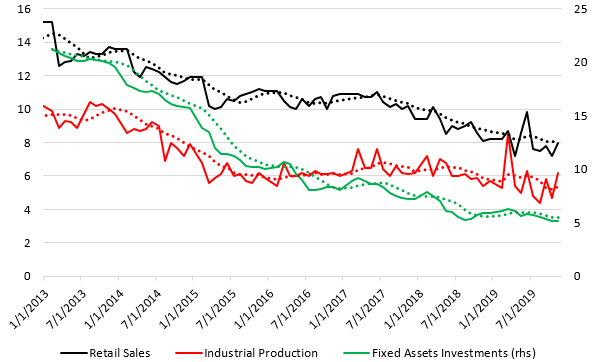 A set of November’s releases from the Chinese economy surprised to the upside. Source: Macrobond, XTB