A fierce return to trade conflict has had a major negative impact on many markets like equity indices, Australian dollar and soybean. However, there is a one huge winner: Bitcoin. It has gained 60% in May alone, taking the year-to-date return above 100%. In this analysis we take a deeper look at how Bitcoin prices skyrocketed as the conflict unfolded and analyse the digital coin's chart.

There are three main reasons why Bitcoin has suddenly become popular with the Chinese investors:

1. High tariffs could result in yuan depreciation that would restore some competitiveness for Chinese exports, but act as a detriment  to the consumer. Chinese investors may want to diversify into assets like gold, dollar, yen and indeed cryptocurrencies to avoid the watering down of their savings
2. Bitcoin has one advantage over other assets – it can be transferred anonymously, which is  not trivial in a country with capital controls
3. Finally, Bloomberg reporter Ed van der Walt argues that Bitcoin will be used by smugglers who will try to avoid US tariffs

It might be hard to quantify these factors but it seems like there’s a widespread consensus that the trade conflict has fuelled the rally and the way it develops could significantly impact Bitcoin prices.

Other factors at play

In our analysis last week we mentioned two additional factors that need to be recalled. One is the fidelity offer for institutional investors and secondly,  Facebook's interest in blockchain technology. Facebook followed on this accouncement with a relaxation of its advertising policies related to cryptocurrencies. Anotherr factor that plays an important role is a possible mining ban in China, which would certainly push mining costs up.

Is the market in a full-bull mode? 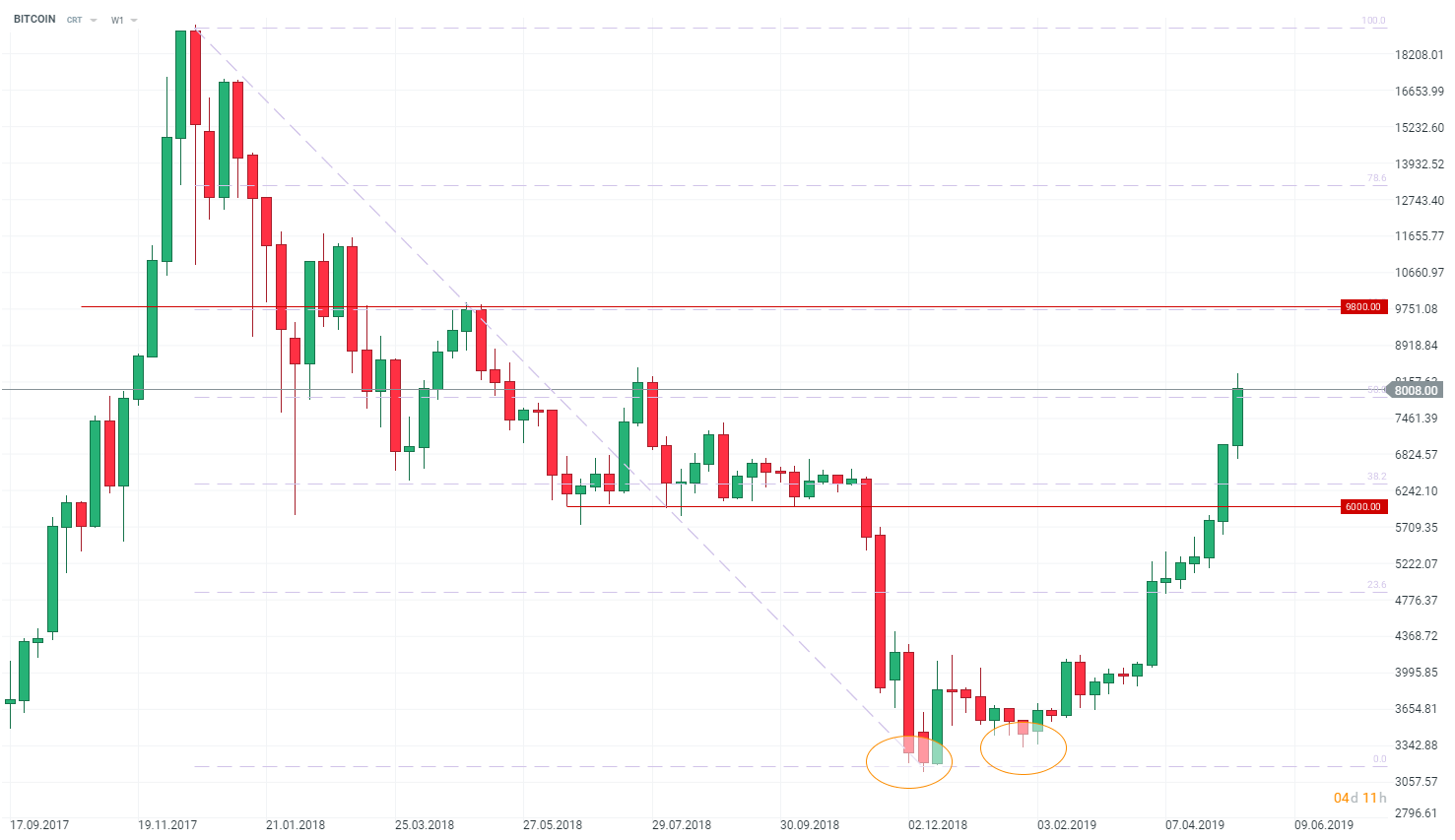 If May ended now, the monthly gain would be the largest since December 2017. Source: xStation5

Looking at the Bitcoin chart it’s clear that the rally compares to what we saw in the second half of 2017. This is the 8th straight week of advances and the last significant correction took place in February. Now that the $6000 barrier has been crushed, the question is: how much of the bear market can be recovered? The first key technical level to look at is $9800: 61.8% Fibo of the bear market and a local high from April 2018. This is coincidentally just a notch below the 5-digit number that we have not seen since March 2018.