Risk-on in FX, risk-off in equities

Both the Australian and New Zealand’s dollars are leading the gains this morning for all a set of disappointing economic releases we were offered overnight. The former is climbing 0.2% while the latter is adding 0.15% against the US dollar. At the same time, the Japanese yen is trading subtly lower reflecting a mild risk-on mode across the FX space on Thursday. This performance seems to be at odds with what we saw on Wall Street yesterday as all three indices finished trading broadly lower - the Dow Jones lost 0.9%, the SP500 shed 0.7% while the NASDAQ gave back 0.8%. In China we are also seeing poor equity performance with the Shanghai Composite falling almost 1%.

The first quarter CAPEX data from Australia came in below expectations. Source: forexlive.com

In terms of economic data from the two Antipoden economies, let us begin with Australia. The most important reading from there was the first quarter data on private capital expenditure. The release showed CAPEX falling 1.7% on a quarterly basis, well below an expected 0.5% QoQ increase. The details did not look better at all. Investment spending in plant and machinery fell 0.5% QoQ, while spending on buildings contracted 2.8% QoQ. Overall, the sixth estimate for total capital expenditure for 2018/2019 was 122 billion AUD, 3.8% higher compared to the same estimate in the previous period. A small positive point could be found in the CAPEX estimates for 2019/2020 (they are early indications though). The first two estimates for this and the following year were above those seen in the prior period. By and large, the overall tone of the release was gloomy, hence strength seen in the Aussie could not prove long-lasting. This is especially true when we take a look at another release - building approvals. The data showed a number of permits declined 4.7% MoM in April, far below the median estimate of 0%. The underlying trend remains downward-sloping and the most recent release (SA) turned out to be weaker compared to this trend.

The report on building permits was also released in New Zealand and it also showed a sub-par figure. In April, a number of permits fell 7.9% on a monthly basis after declining 7.4% in the prior month. On top of this reading, the NZ government slashed its budget surplus forecast to 1.3 billion NZD for the 2019/2020 fiscal year. The economy is to expand at a slower than previously pace of 2.1% (vs. 2.9% the previous forecast). When it comes to risks to this estimate the Ministry of Finance pointed the US-China trade dispute, Brexit and the slowing global economy. 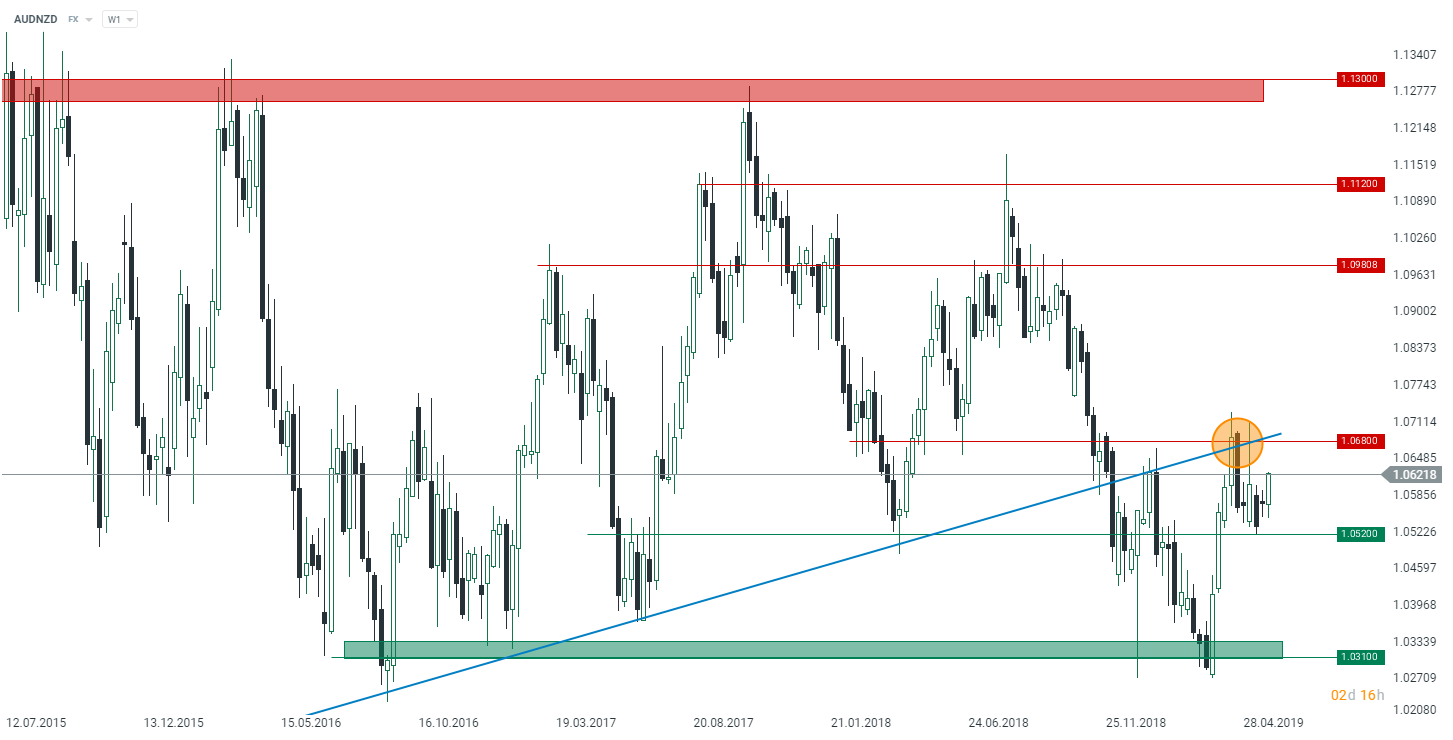 The AUDNZD is climbing again toward its resistance placed in the neighborhood of 1.0680. Do notice that the sharp rally present some time ago there was brutally stopped at around 1.07, hence bulls may have this in their minds and therefore a break above this line could be challenging. Source: xStation5