The fall of Luna and problems of the entire cryptocurrency market

The crash of the Luna cryptocurrency has become one of the most spectacular events in the entire history of the cryptocurrency market. The project lost nearly 99% of its valuation in just a few days, and its capitalization dropped from tens of billions of dollars to just a few hundred million at the time of writing this article. What was the cause of Luna's massive rise and sudden sell-off, and how will this affect the entire crypto market?

Luna benefited from a popular trend in the cryptocurrency world called DeFi, or 'decentralized finance', which allowed holders of projects like Luna to benefit from advanced financial mechanisms that rival the offerings of the traditional banking system. During the massive post covid surge of cryptocurrencies, millions of fresh investors entered the market and outbid each other to buy various 'trendy' projects. During this time that Luna attracted interest due to its increasing reward rates for providing liquidity in the system. Thanks to the rising price and market capitalization, the investors' rewards  were also increasing, which attracted additional participants.

The creators of Luna created a system that was supposed to provide a return on passive investment of up to 20% and act as a 'safe haven' asset even during market crashes. These features attracted the attention of many market participants who wanted to avoid the risks of owning other cryptocurrencies. Luna's story exposed the truth about the recurring behavior of people who, seeking an escape from risk, engaged in seemingly safe, 'stable cryptocurrencies'. This is somewhat reminiscent of the adage where investors wanted to 'have the cake and eat it too' i.e. achieve high returns on investment while not taking risks.  The market ignored the warning signs when the Waves project's stablecoin Neutrino, which was supposed to reflect the price of the dollar, collapsed over a month ago.

Luna's rise in popularity and the massive price rally  lent credibility to the project in the eyes of investors, and the project's media CEO DoKwon gained popularity on Twitter. The way Luna was built created a huge systemic risk that only became apparent in the face of investor outflows. The scale of the De-Fi trend popular in this bull market meant that a small number of projects were really closely scrutinized by cryptocurrency market participants.

Investors were blinded by price increases, which alone are not an indicator of long-term success and strong fundamentals. Information about technological advancements and algorithmization was also credible. The existence of similar risks in the cryptocurrency ecosystem was highlighted in a report by, among others, the ArkInvest investment fund, run by Cathie Wood. For several months, information about 'Ponzi schemes' and financial pyramids on the cryptocurrency market had been circulating. However, this did not prevent massive declines and did not change the speculative nature of this market. 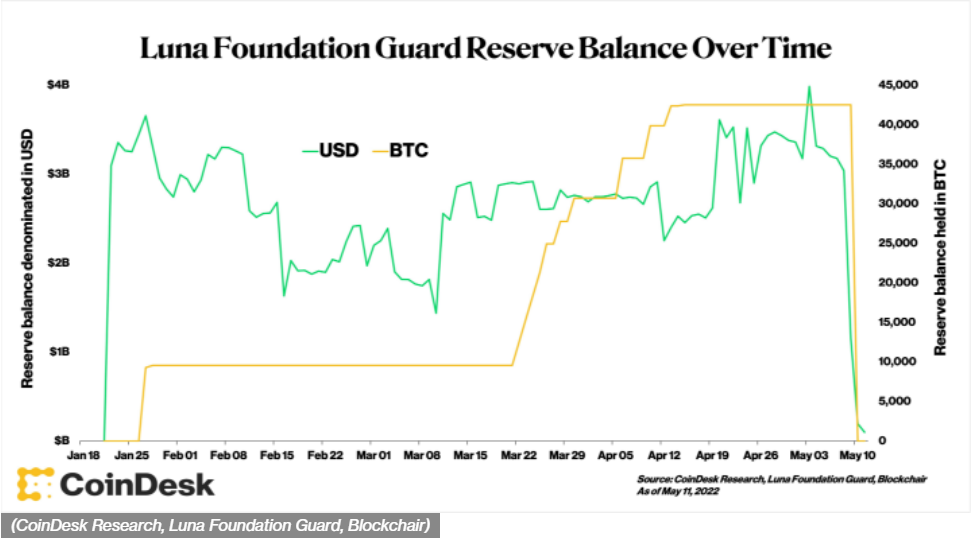 Luna Foundation was forced to liquidate its Bitcoin reserves to support the failing UST price. Originally, Luna informed that in the event of a decline in Bitcoin's price, it will try to prevent further declines by buying BTC around $ 22,000 level. Source: CoinDesk

News of a possible speculative attack on the project was provided by Cardano cryptocurrency CEO Charles Hoskinson, among others. According to reports circulating on the web, Citadel and BlackRock funds contributed to the collapse, putting a 'stick between the spokes' by selling a huge amount of UST tokens and Bitcoin, which may have contributed to the panic sell-off. Both funds reportedly have knowledge regarding the insolvency of the lucrative Luna system and use it to trigger downward move.  This information has still not been confirmed in any way. On the other hand, the developers of the accused fraudulent projects have recently reported that they were victims of an information war designed to cause panic among investors. Both of these issues are not crucial, as the Luna case exposed the imperfection of the system.

Major exchanges will likely begin to more thoroughly verify new and existing projects made available for trading. Regulators, will pay more attention to so-called stable cryptocurrencies, which mimic the prices of physical assets like gold or currencies. U.S. Treasury Secretary Janet Yellen  announced that the market will see appropriate regulations by the end of 2022. At the same time, the US SEC reported on the destabilizing impact of cryptocurrencies on the health of financial markets. There is still a risk that the cases of Luna or Waves, which became known as 'Russian Ethereum' during the growths, were not isolated.

Is this the end for crypto bulls?

The cryptocurrency market has repeatedly shown strength in the past and has always emerged victorious from similar oppressions. Even the complete collapse of the largest cryptocurrency exchange MtGox in 2014 was not able to stop the growth. Bankruptcies also happen to listed companies and are an inherent part of the market. The collapse of Luna ultimately poses no threat to the fundamentals of other projects that have proven their worth, although it may hurt market sentiment at least in the short-term. This is typical of periods of cyclical downturns, during which a sizable portion of investors look for opportunities and choose to accumulate cryptocurrencies in anticipation of another bullish cycle.