Turkey stunned investors in August by immersing in the currency crisis at its own wish. Although a reckless behaviour of president Erdogan is a direct trigger, Turkey had some well documented flaws. We explain the crisis on the 9 charts. 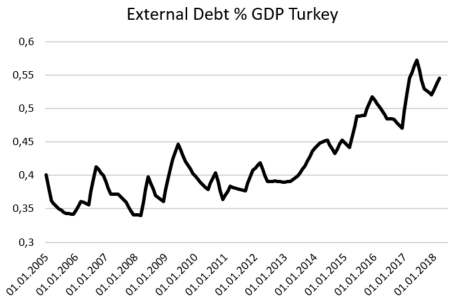 Turkey has borrowed a lot and need hard currencies to pay down that debt. Source: Macrobond, XTB Research

Growth at all cost – that was the policy of president Erdogan that produced a stunning 11.3% growth rate in the third quarter of 2017 but stretched economic fundamentals to the limit. One of the source of fuel that boosted the economy was a foreign financing. In a world of low interest rates the Turkish companies were happy to borrow in US dollars, pushing the gross external debt above $460 billion or around 53% of the GDP. As a result, Turkey needs dollar to repay or at least roll over this debt. 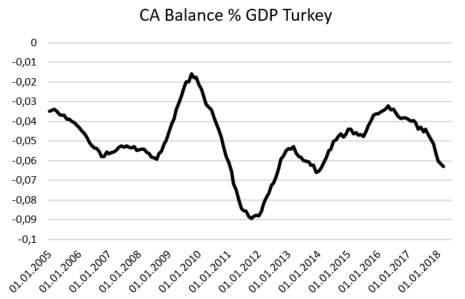 When there’s a lot of money – mostly from domestic and foreign financing, there’s also high demand. When a demand exceeds production capacity you will get two things: trade deficit and inflation and Turkey got both. Normally a central bank increases interest rates to balance demand with supply but the CRBT had its hands tied by president Erdogan who was seeking “growth at all cost”. High current account deficit increases dependence on foreign financing and when there’s no capital ready to lend, the currency may decline sharply as foreign currencies must be bought on the market. 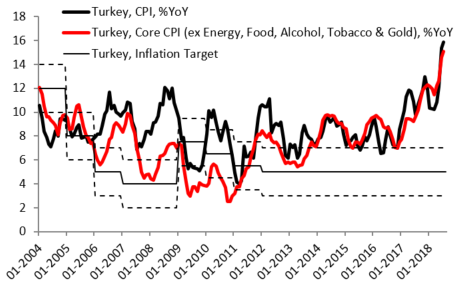 Inflation in Turkey is out of control. Source: Macrobond, XTB Research

A declining exchange rate might help the economy as it increases competitiveness of the domestic exports. If investors have trust in the central bank, there’s always a bottom for the currency. But if there’s a concern that central bank cannot keep inflation under control, we have inflationary spiral when currency depreciation leads to higher inflation, higher inflation leads to currency depreciation and so on. Although the main interest rate in Turkey at 17.75% is impressive in nominal terms, inflation is bound to exceed that number unless lira recovers. Then the CRBT would need to raise rates even more, probably pulling Turkey into recession. A recovering lira is in best interest of Turkish authorities.

High credit growth could be a problem for Turkish banks. Source: Reuters

Turkey used not only foreign but also local credit to fuel the economy. Credit growth of 20% is definitely not a sign of stability and if look who is close (Argentina, Congo, Belarus) it should be a reason for concern. If Turkish companies start facing problems, banking sector could be exposed. 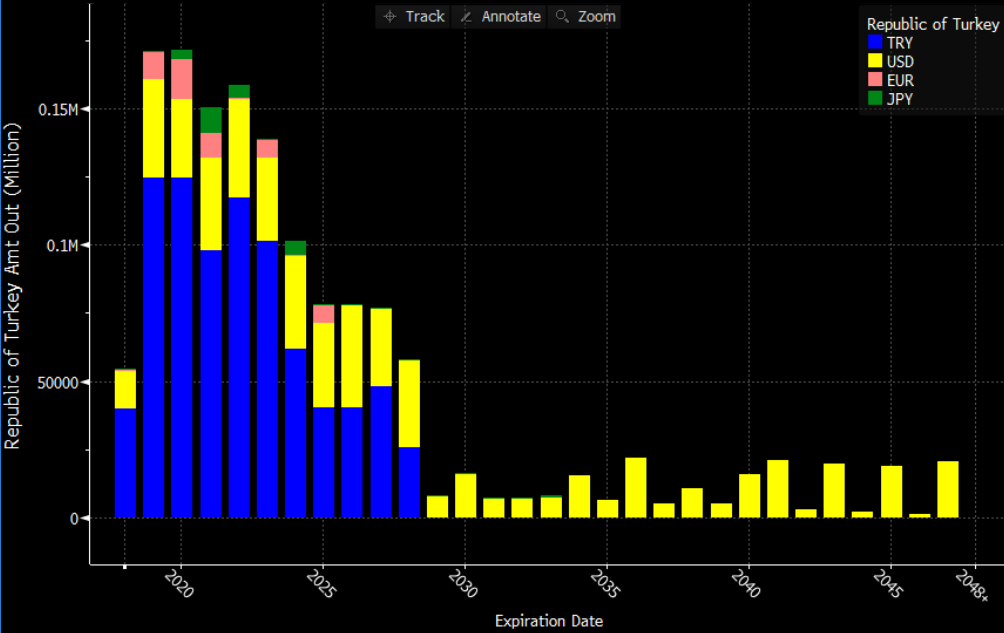 Erdogan told the Turks to ignore exchange rates. The problem is that Turkish companies will need US dollars to repay debt for years. Source: Bloomberg

The Turkish companies have proceeds mostly in lira and plenty of US dollar debt to repay or roll-over. It is therefore obvious that a steep decline of the currency makes this task more challenging. If companies hit troubles, banking sector will have a big problem (as explained above). Once again, a recovery in the lira is crucial – even at the cost of higher local interest rates.

The 5.00 mark looked like a ceiling when the pair was trading in a consolidation between May and July. Now it looks like a level that is hard to achieve. The first level to look at is 5.55 – the opening of the “Black Friday” for the lira. There’s also a 61.8% Fibo retracement of the latest steep rise of this pair.

Despite a recovery in lira, USDTRY has not even tested the first support at 5.55. Source: xStation5

7. EURTRY - far from the trendline

Even though EURTRY moved above a steep trend line for the whole 2017 and the first part of 2018, a return to this line would be a dream scenario for the Turkish authorities. That would take the pair to around 5.50. That’s a very optimistic scenario. The first support is at 5.87 but given where the pair is at present that would take also a leap of faith in the lira.

Turkish officials would love to see EURTRY back at the trendline but it's very far from that. Source: xStation5

8. The conflict with the US needs to be resolved 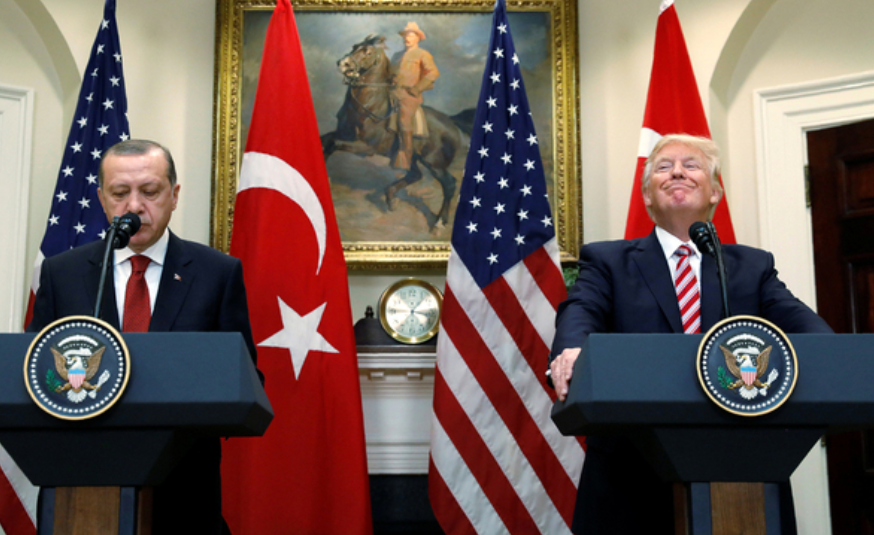 The lira could use a meeting like this - the problem is that relations between Trump and Erdogan have deteriorated badly without a promise of any improvement. Source: Reuters

We’ve seen how important the exchange rate is for Turkey and that the country will need US dollars going forward. From that perspective a conflict with the US does not sound like a good idea. President Erdogan claimed to seek alliances elsewhere, securing investment pledge from Qatar and reaching out to Russia and Germany. However, sadly for him, he needs to finds a reconciliation with the US to even hope to resolve the currency crisis. 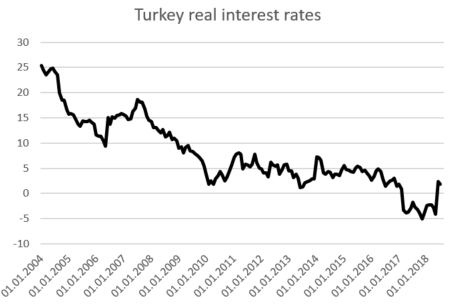 Even if relations with the US improve, Turkey will need a period of positive real interest rates (central bank rates less annual inflation). When the Bank raised rates in May it was a good sign but now with this latest episode inflation is bound to rise again and will most likely require more rate increases. The longer the crisis lasts, the more central bank will need to raise rates, potentially damaging the economy. The recipe is there: make a deal with the US and allow central bank to increase rates and hope for the best. The problem is that Recep Erdogan sees this his way…

The silver market had a problem with breaking above the $18.35 handle, and the downward correction started. Looking at the H4 interval, the precious metal...