UK wages growing at quickest pace in a decade

For the second day running we’ve seen some better than expected data from the UK, with the unemployment rate, claimant count change and wage growth all topping analysts’ estimates. An increase in 3M/Y terms of 4.0% for average weekly earnings is not only well above the 3.7% forecast but also the highest reading since June 2008. The prior reading was also revised higher by 10 basis points for good measure to now stand at 3.8%. Stripping out bonuses, which can give a misleading view due to their volatile nature, and the figures are still good, with ex bonus weekly earnings increasing more than expected at 3.8% 3M/Y.

These sort of readings are representative of a tight labour market and it’s not too much of a stretch to say that were in not far Brexit, then the Bank of England would be thinking long and hard about raising rates in the not too distant future. However, Brexit continues to play a prominent role in the decision making of Governor Carney and his fellow MPC members and as such we don’t expect any movement on rates until greater clarity is provided on this front. 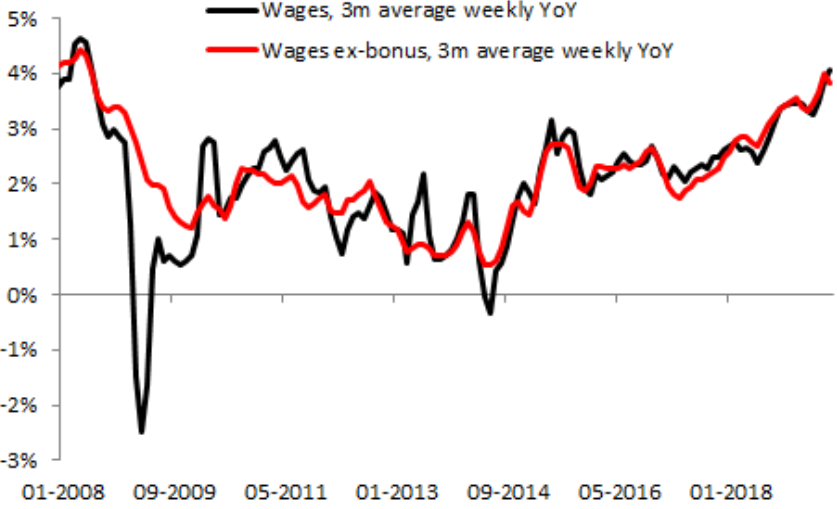 Both wages and wages ex-bonus remain near their highest level in 10 years in the UK. Source: XTB Macrobond

The other data simultaneously released were as follows:

The start of a 5 week suspension of UK parliament began last night, with a last ditch effort from Boris Johnson to declare a general election failing to get the requisite support. This is the second time a vote in the House of Commons has failed to receive the ⅔ support required to hold a GE and means there are now no more immediate opportunities for further legislation to pass. The current impasse shows little sign of abating anytime soon, with the PM now seemingly required by law, but against his own wishes, to continue negotiating without the threat of a no-deal. How much his options are limited by the bill which received royal assent yesterday is still not clear with suggestions that Boris will look to test the limit of what is lawful going forward. Overall, the outlook remains about as clear as mud, with the only high probability call being that a general election will take place in the not too distant future - although even the timing of this is far from certain at present.

GBPJPY has recovered back to the JPY flash crash low seen at the start of the year around 132.95. The market is back above the 50 SMA but needs to make a clean break above the 132.95 level before any further gains can occur. Source: xStation