Wall Street: All-Time Highs and then what?

Equity indices have been driven lately by trade news. Avalanche of signals that some kind of partial trade pact between the US and China could be signed soon led to a strong rally. US500 gained 8% and US100 as much as 10% in just one month and secured fresh all-time highs. We take this opportunity to look at several charts describing the World’s most important equity index.

Proponents of the secular bull market argue that we are seeing a repeat from the giant bull market that started in late 1982 and lasted 18 years, separated only by a deep but short-lived 1987 Black Monday crash. If that run was repeated we’d be just past half of the cycle both in terms of range and time. 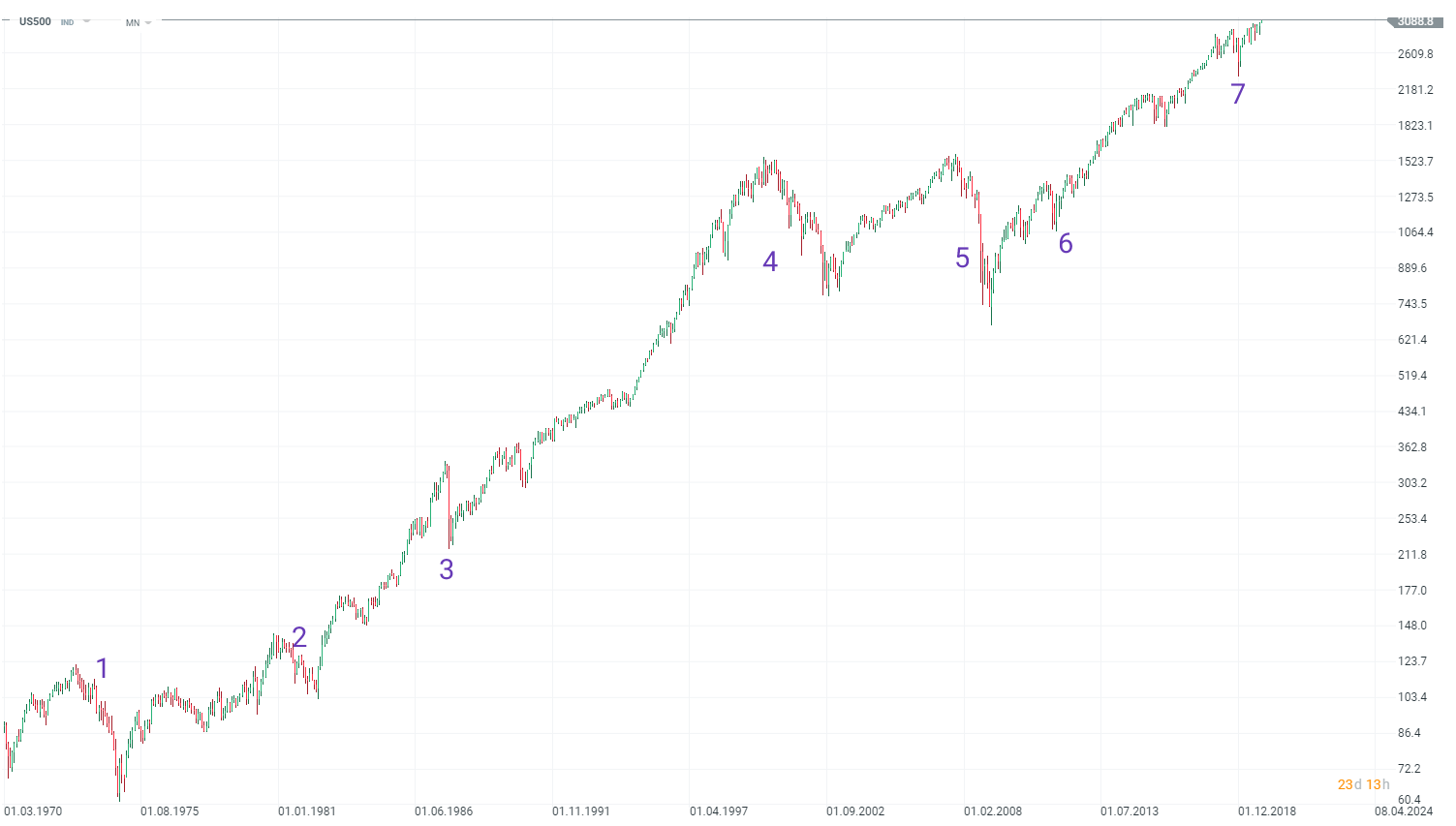 Another argument cited by the bull camp is that the gains are supported by earnings. This is true to some extent - P/E (price to earnings) is above historical standards but not yet extreme and indeed markets that lacked earnings growth failed to match the US rally. It’s sometimes said that extreme S&P500 to US GDP ratios are misguided because the GDP does not reflect the success of tech stocks that stand behind the present rally. From that perspective P/S (price to sales) should be much more credible plus any accountant will tell you that revenues are much harder to manipulate than earnings. Such valuations are now extremely high so from that perspective a continuation of this bull market would require a rapid revenue growth - something that will depend on economic performance of the global economy. 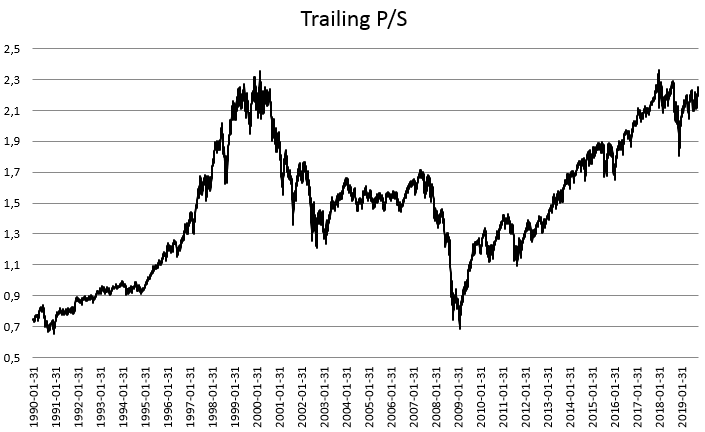 Price to sales ratio is the one draws parallels to the dot.com bubble. Source: Bloomberg, XTB Research

Strong consumer - but what does that mean?

While 20+% decline that S&P 500 experienced at the end of 2018 may look significant, it is actually quite minor in comparison to dot-com crash and global financial crisis. Not only price decline was smaller, but it also was not accompanied by the cliff-edge drop in consumer confidence. However, a point to note is that consumer confidence plateaued ahead of the global financial crisis and we are observing a similar pattern now. Additionally, taking a look at the levels of the CB consumer confidence index, one can see that consumers were not that confident since the dot-com bubble. The key takeaway he is that consumer oriented macro data (sentiment, labour market, spending) did not historically provide reliable warning signals for stocks so a “strong consumer” at present cannot be taken as an assurance. 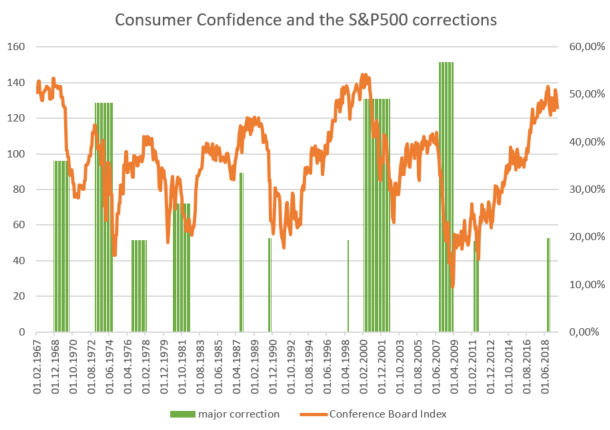 US consumers were not that confident since the dot-com crash. It should be noticed that CB index is plateauing just as it did ahead of the global financial crisis cliff-edge drop. Source: Bloomberg, XTB Research

Over 80% of S&P 500 companies have reported their earnings for the third quarter of the year already. While reports tend to beat market expectations, earnings growth on the index level is negative. Sales of the S&P 500 companies on the index level grew 3.66% YoY in the Q3 2019 while earnings declined by 1.09% YoY on average. However, when we take a look at the breakdown provided on the chart below, we can see that 2 sectors are to blame for the overall EPS decline - Oil & Gas and Basic Materials. A point to note is that half of the companies that are yet to report belong to sectors that saw earnings growth exceeding 5% (Consumer Services, Healthcare, Utilities) therefore it is still possible for the S&P 500 to snap a losing streak and report a positive earnings growth at the end of the season. One one hand, we haven’t seen a major deterioration in earnings. On the other, earnings are slightly down while the index is up some 13% from a year ago.

Earnings growth for S&P 500 is negative but half of the companies that are yet to report belong to sectors that enjoyed high growth in Q3 2019 - Consumer Services, Healthcare and Utilities. Source: Bloomberg

Market sentiment high but not extreme

It’s often said that greed and fear rule the markets, especially over a short and medium term and this could be true for US indices as well. Extreme attitude is not good as it may lead to a sharp reversal. So where are we now? Our indicators that is based on 5 market sentiment measures is high, showing strong but not extreme optimism. Do notice that is was extreme in January 2018 - just ahead of a sharp market pulldown. We are at levels not seen since early April. In the spring it was followed by market corrections but only in May - US500 still managed to climb through April. 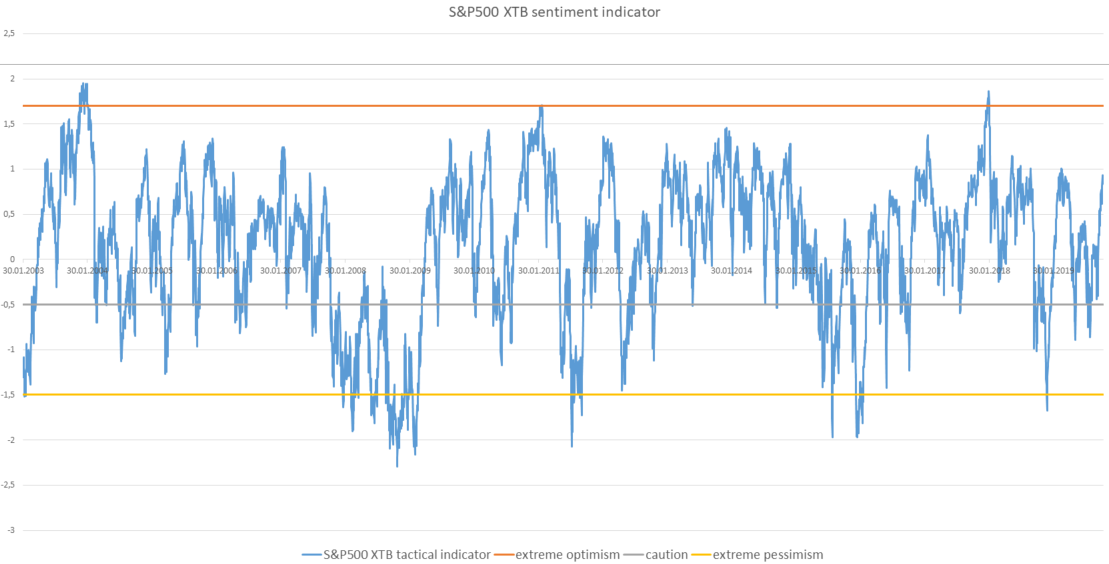 High but not extreme - these sentiment levels on their own are not enough to trigger a market correction. Source: XTB Research

S&P 500 (US500) broke above the all-time high at the end of October and is trading in an uncharted waters now. However, exterior Fibonacci retracements may offer a hint at potential resistance levels to watch. The 161.8% exterior Fibo level of the decline that took place in the second half of September suggests that sellers may be looming in the vicinity of the 3132 pts handle. Measuring this retracement for the July-August drop suggests that the next bears’ camp may be located at 3181 pts. Meanwhile, the breakout zone below 3030 pts is the key support to watch in case buyers lose control over the market.

So where does it leave us? S&P500 looks expensive long-term wise and continuation of the rally in that time-frame requires economic recovery. In the short run, markets are optimistic but this optimism is not yet extreme and investors are left to follow the trade news on a daily basis. Could the “buy the rumour, sell the news” rule work again and will the official signing of the Phase1 US-China deal be a tipping point for the markets?

European equity indices and US stock market futures nosedived following report from Bloomberg. Bloomberg claims that China plans to halt purchases of US...

Markets seem cautious at the beginning of a new week ISM manufacturing to be release in the afternoon No DAX cash session due to...