Crypto losses before weekend. Bitcoin miners capitulation is yet to come? 📉

The Bitcoin is still struggling to stay above June lows. However, the dismal sentiment on the indices is feeding into the digital assets and altcoins are erasing the bulk of yesterday's gains. Is the crypto market nearing another capitulation?

One of Bitcoin's largest mining centers, Compute North has filed for bankruptcy. The company operated in the three states of Texas, Nebraska and South Dakota. Recently, management reported that CEO Drake Harvey had left the business amid price declines in the crypto market. In February of this year, the company reported receiving $385 million in financing. That didn't help save it from bankruptcy, however, as low Bitcoin prices are eroding miners' margins, which, combined with rising energy bill prices, is creating enormous supply pressures.

Compute North's bankruptcy could reverberate throughout the industry, the company had a number of contracts with other large Bitcoin miners which could cause a domino effect although, among others, one of Compute's major partners Marathon Digital has already reported that Compute North's insolvency will not affect the company's existing contracts and operations. Other major partners include BitDigital, Singapore's Atlas Mining, China's Crypto Miner The9 or Sphere 3D. The bankruptcies of significant players in a market that has been hit by a wave of irresponsible financial actions over the past 2 years may cause a domino effect. We have already met its effects in the case of the Luna collapse, which resulted in a wave of bankruptcies of Celsius Network, Voyager Digital and Three Arrows Capital, among others.

What could be the another concern?

Bitcoin is sending troubling signals from a technical analysis standpoint. The exponential 10-day EMA has crossed below the 20-day average. Also, measuring the RSI from the Ethereum Merge day to today suggests a bearish turn in sentiment, the decline additionally took place on higher volume. The RSI fell again and the sustained lows indicate possible bearish momentum and a supply advantage at key points on the chart.

Glassnode data is also absolute for the major cryptocurrency, the percentage of all historically purchased BTC in profit fell to around 50%.  The previous huge oversold levels of the BTC in profit metric was reached in March 2020 when a drop below $4,000 resulted in only 41% of Bitcoin being in profit. Today, the metric is dangerously approaching levels below 50%, which could indicate an impending capitulation and oversold level. On-chain data indicates that addresses holding between 1,000 and 10,000 BTC are liquidating them to less wealthy investors as Bitcoin supply has increased for addresses holding less than 1,000 BTC.

The EU has finalized the text of new regulations on the so-called MiCA i.e. Markets in Crypto Assets. The text can theoretically still be edited but according to CoinDesk sources it is almost in its final form. In principle, the law calls for consideration of 'substance over form', which in practice means that the actual nature of a given cryptocurrency project will be determined by its purpose, not by its unique nomenclature or digital designation. The EU, in practice, may be making room for itself to regulate the NFT market because the attention of regulators has been attracted by the growth of assets where a set of NFT tokens is issued to represent a de facto single token which raises concerns around similarity to securities (shares). The report also talks about the so-called stablecoin market pushing for currency hedging regardless of the foreign currency represented by the stablecoins, capital requirements and responsible consumer protection from fluctuating value. At the moment, MiCA is not a regulation while it can provide a basis for interpretation of regulations by courts and regulators inside the EU. 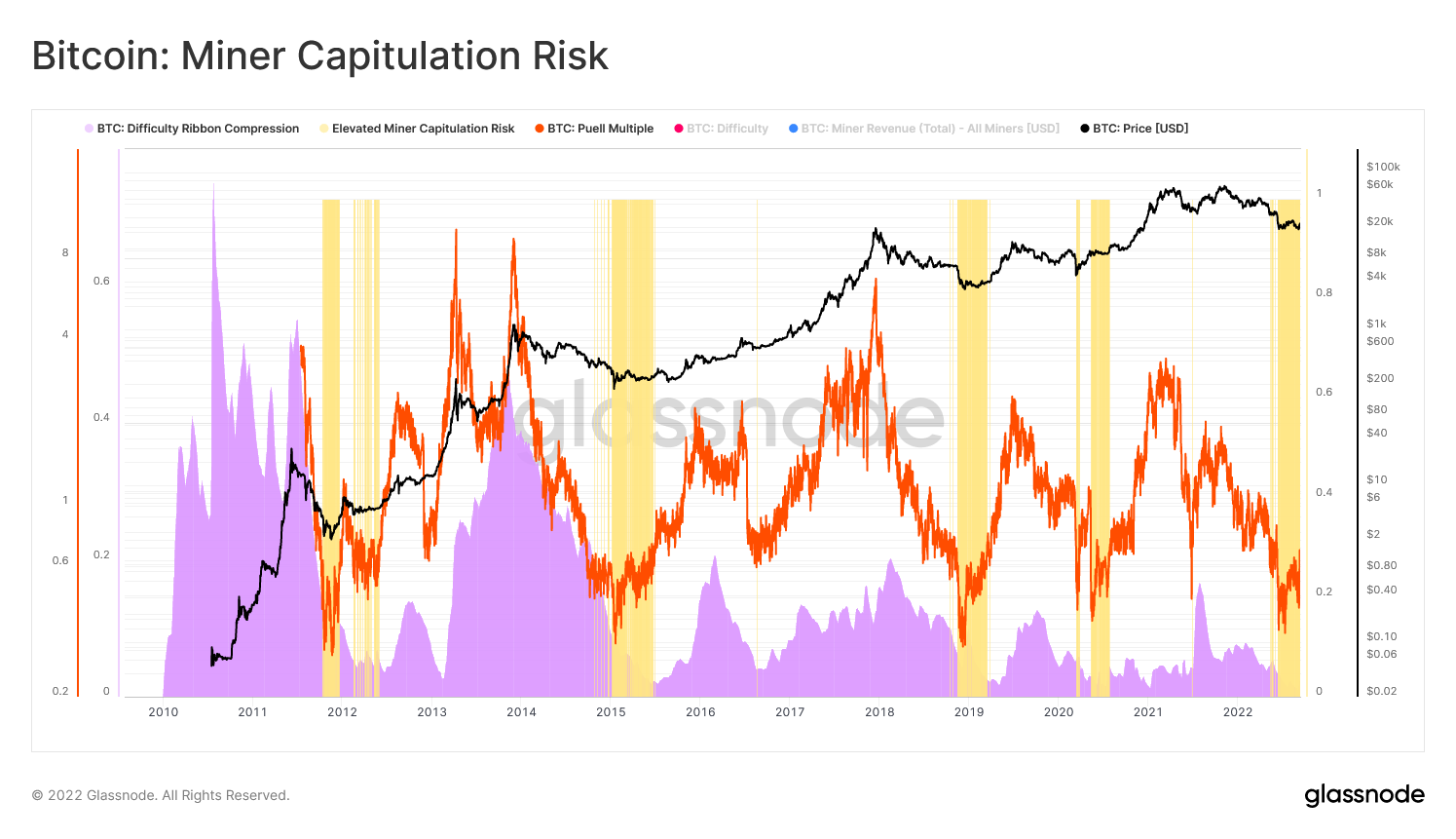 The miner capitulation risk tool built by Glassnode consists of two parts. The indicator is a two-part model that looks for a correlation between the stress of BTC mining margins (Puell Multiple) and the observed decline in hashrate i.e. miners' computing power (Difficulty Ribbon Compression). With the model built in this way, we can tentatively determine the time when the capitulation of Bitcoin miners may materialize. The PM multiplier (in red) tracks miners' aggregate income in USD counts to an annual average. Readings lower than 1.0 indicate that incomes are below average, while values below 0.6 indicate financial problems. Thanks to the so-called Difficulty Ribbon mentioned above as DRC (Difficulty Ribbon Compression), marked in purple, we can observe the decline in mining difficulty, which is usually associated with the shutdown of miners' mining machines when they become unprofitable or on the verge of profitability. Yellow zones are places where the risk of capitulation is significant, they usually correlate with extreme phases of a bull market. Glassnode chose a threshold of the sum of the aforementioned PM and DRC above 0.65 as a high-risk indicator.  We can see that the indicator (yellow) is currently at unsafe levels for miners and, in the context of Compute North's bankruptcy, could signal renewed, internal problems for the industry. At the same time, the "Whale Net Volume" indicator looks a little better today, confirming that addresses holding more than 1,000 BTC are moving their tokens from exchanges to external, private wallets, which probably means a decreasing propensity to sell Bitcoin among so-called whales at such low prices. Source: Glassnode

Bitcoin chart, D1 interval.  Bitcoin has failed to stay above $19,000, RSI is falling. The consolidation, which has been going on since June, is probably approaching a climactic moment, with current circumstances supporting the possibility of declines below the June lows. The S&P500 index is already near the June lows, which could determine that bitcoin will soon also go as near as $17,500. Source: xStation5

WTI crude futures traded near $88.00 per barrel on Thursday, having rallied more than 10% so far this week as OPEC+ agreed to cut output by 2 million barrels...