There’s been a broad risk-off move seen in the markets this morning after the latest comments from Beijing suggested that investors may be getting a little bit ahead of themselves in assuming a smooth de-escalation in trade tensions between the world’s two largest economies. Stocks in Europe and US futures took a swift dip lower along with bond yields while Gold rose back above the $1500/oz level to trade near its weekly highs in response.

The German Dax had its swiftest hourly drop in a couple weeks when the trade news dropped, with the market falling around 130 points (1%) in less than 60 minutes. However, the prior swing region around 12785-12810 attracted buyers and this now becomes a potentially key support zone. Source: xStation

The market’s sensitivity to this kind of news was revealed yesterday, when a smaller but similar move occurred following reports that the APEC summit in Chile where the US and China were expected to sign “phase one” of their trade deal was cancelled. Traders and headline-scanning algos rushed to sell stocks on it before the realisation that the cancellation was solely due to civil unrest in the country at present and not because of a breakdown in US-Sino negotiations saw the moves reversed.

“Phase one” is still set to be signed next month, in Macau, but the latest remarks suggest it could be presumptuous to believe that this will lead to phases two, three and possibly more in short order. Reports indicate that China has doubts about reaching a comprehensive long-term trade deal with the US, and has taken aim at president Trump for these, citing his impulsive nature and the risk that he could pull out of the terms in the coming weeks.

It is worth noting that market sentiment had gotten very upbeat on trade in recent months despite only a little tangible progress and those who were extrapolating the recent events into a long-term deal may now start to question that hypothesis.

The news has taken the gloss off a positive market reaction to last night’s FOMC decision where the US lowered rates for a third consecutive meeting and while the bank signalled they are not committing to further easing for now, if these latest events are the start of a resumption of increasing tensions then further cuts would likely follow.

A print of 0.7% in year-on-year terms for the Eurozone CPI flash estimate is the lowest in almost 3 years, but an unexpected 0.1% rise in the equivalent core measure to 1.1% sends a mixed message on price pressures in the bloc. Having said that, whichever way you look at it inflation, according to these metrics, continues to run well below the 2% target and therefore justifies the resumption of asset purchases by the ECB which are due to occur once more next month. 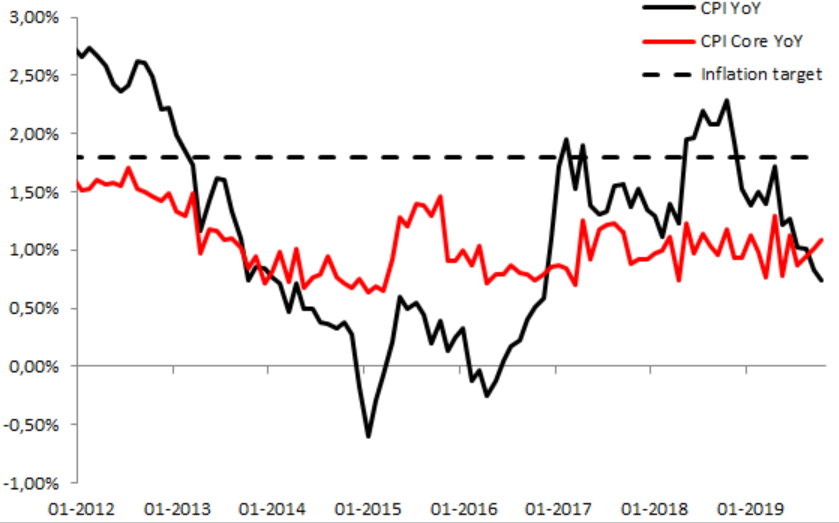 A drop in the headline but rise in the core CPI figures for October paint a mixed picture of the current price pressure but whichever way you look at it they are still running well below the 2% target. Source: xStation

At the same time as the inflation data we also got the most recent employment and growth figures from the Eurozone. For September the unemployment rate as 7.5% vs 7.4% consensus forecast while the prior month was revised higher by 10 basis points to also stand at 7.5%. This metric remains close to its lowest level in several years but has seemingly levelled off and has at least paused its steady decline in recent months. Preliminary Q3 GDP for the area came in above forecast, meeting the Q2 reading of 0.2%. Part of the reason this is nominally far lower than the US is due to conventions - yesterday’s figures from across the pond are quoted in annualised terms -  but it is still pretty clear that growth on this side of the Atlantic is lagging behind in comparison and points to a fairly slow pace.

The EURUSD has gained every day this week with price this morning moving back near the 12 week high of 1.1180. The lagging line has just moved out of the D1 cloud and the trend could be turning higher. 1.1075 seen as possible support. Source: xStation