Special report: Is Tesla really worth more than $100 billion?

In a world of trillion dollar valuations on Wall Street, market participants are rarely stunned at a “mere” $100 billion company valuation. However, the fact this makes Tesla the second most valuable car manufacturer in the world, preceded only by Toyota, took the markets slightly by surprise. Moreover, as Tesla produces just 25 times less vehicles than the third company from the list, Volkswagen, this makes the exceptionally high valuation that much more interesting.

Due to the meteoric rise of the stock price, it’s clear why the quarterly report release this week is so highly anticipated. Many investors see the stock as an example of exuberance and look at it as an indication for a broader market.

Tesla was already valued at $60bn back in 2017 but the beginning of 2019 brought a sharp correction. Since then Tesla (TSLA.US) quickly surpassed valuations of traditional automakers such as BMW (BMW.DE), Daimler (DAI.DE) and VW (VOW1.DE) despite selling only a fraction of their deliveries. So right now investors are amazed by two things: a sheer valuation (multiples comparison) and a pace of recent gains. Let’s start from the first argument. 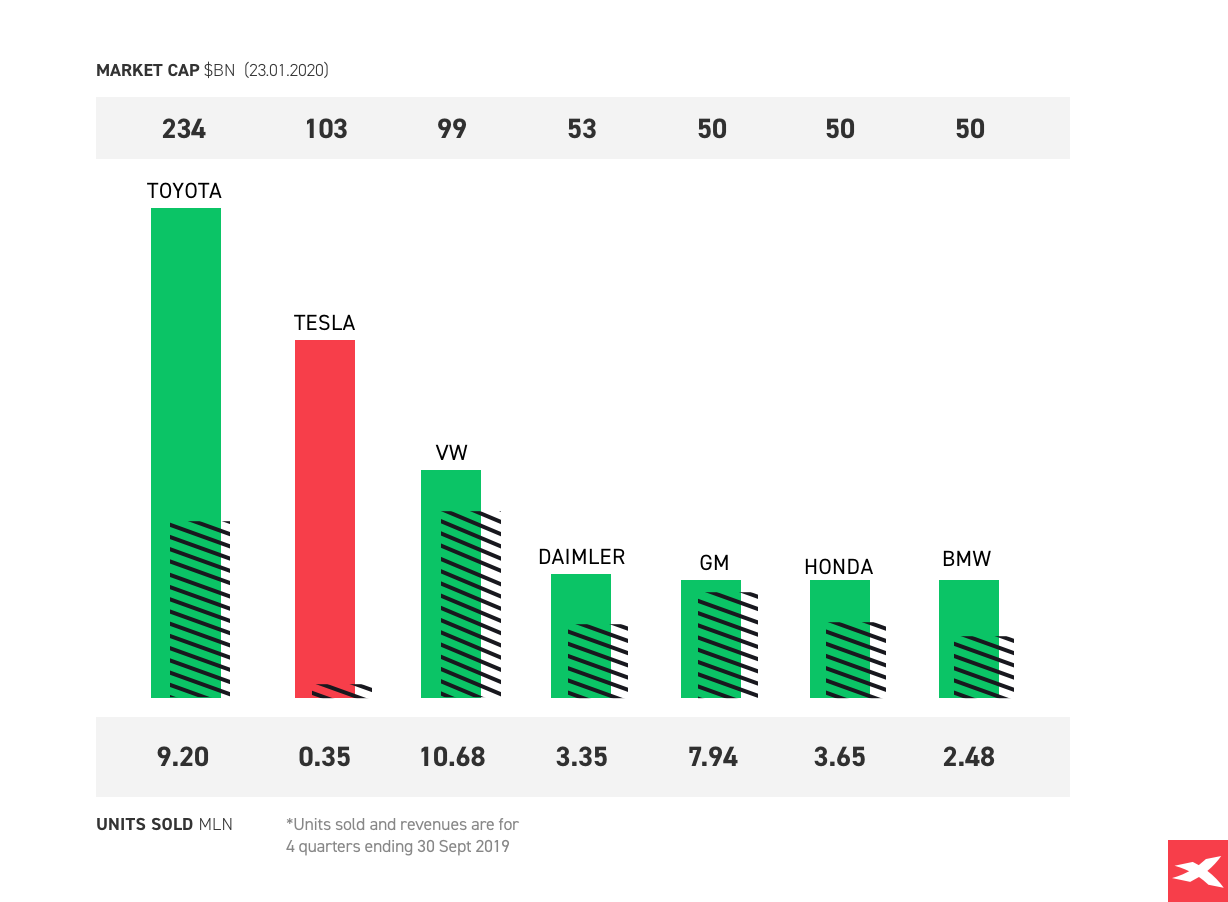 Tesla valuation is about the future. It currently assembles only a fraction of vehicles compared to the biggest automakers. Source: XTB Research

It is obvious that from a static point of view Tesla shares are inexcusably expensive. Compared to other major automakers Tesla is the only one that did not have a profit over the past 4 reported quarters. Markets expect this to change but even then the P/E multiple would be close to 85, compared with 12 for Toyota and as low as 6 for VW. Earnings are volatile and prone to accounting tricks so often price to sales is a more reliable ratio. It stands at 4.2 for Tesla which means that investors are paying $4.2 for each $1 of revenues. Again a cross-check sees this measure at between 0.27 for Daimler to 0.83 for Toyota. There is one exception - Ferrari, having P/E and P/S multiples at 39.5 and 7.7 respectively. But this is obviously a strikingly different company selling much more than means to travel and unmatched 55% ROE. Tesla rivals companies like BMW, Daimler or Porsche. By the look of numbers it would need to be around 10-times larger in terms of sales. However, bulls argue that Tesla shouldn’t be seen merely as a carmaker but a tech company due to its energy and autonomous driving divisions. While this is true, these parts of the company are even harder to value. They contribute less than 20% of total revenues so we could say that the automotive sector should be some 8-times larger to make a number match. Of course, there are many variables that ought to be considered - time horizon, growth of competitors, regulatory changes, competition from alternative power sources or even oil prices. Standard DCF valuations are usually done with a time horizon of 5 years. So if we simplify the reality, we could ask ourselves: could Tesla revenues expand 8-times over the next 5 years?

Will the World go electric?

The push for green is obvious and it’s one of the factors that drives the demand for electric vehicles (EVs). It has many colours. On one hand, societies become more aware of pollution and global warming and in many circles being green is a fashion. On the other, those unconvinced can have little choice as some cities put severe limits on polluters and EU carmakers need to pay CO2 fees. But how big will this market be? Deloitte report estimates it at 12 million units in 2025. That’s the optimistic end of forecasts. On the other end is the Bloomberg consensus at just above 8 million. IHS sees EV share at 10.2%. If we assume global car sales to grow by 2% annually until 2025 that would result in sales of 9.35 million. Tesla had around 16% in the global EV market measured with units. If that share remained unchanged, it would be able to sell around 1.5 million cars in 2025 or 4 times the number in 2019. That would imply Tesla needs to double its market share by 2025.

How much of the cake can Tesla eat?

One of the reasons behind a still relatively low sales of Tesla cars are production limitations. This is precisely the reason Tesla opened its factory in China and plans another one in Germany. This should also make it more resilient to trade tensions. However even after opening of the new factories the company might not be able to produce more than 1.3-1.5 million cars in 2025 and with the amount of debt on the books, faster expansion could be impossible. So from the capacity perspective even maintaining market share will be challenging. 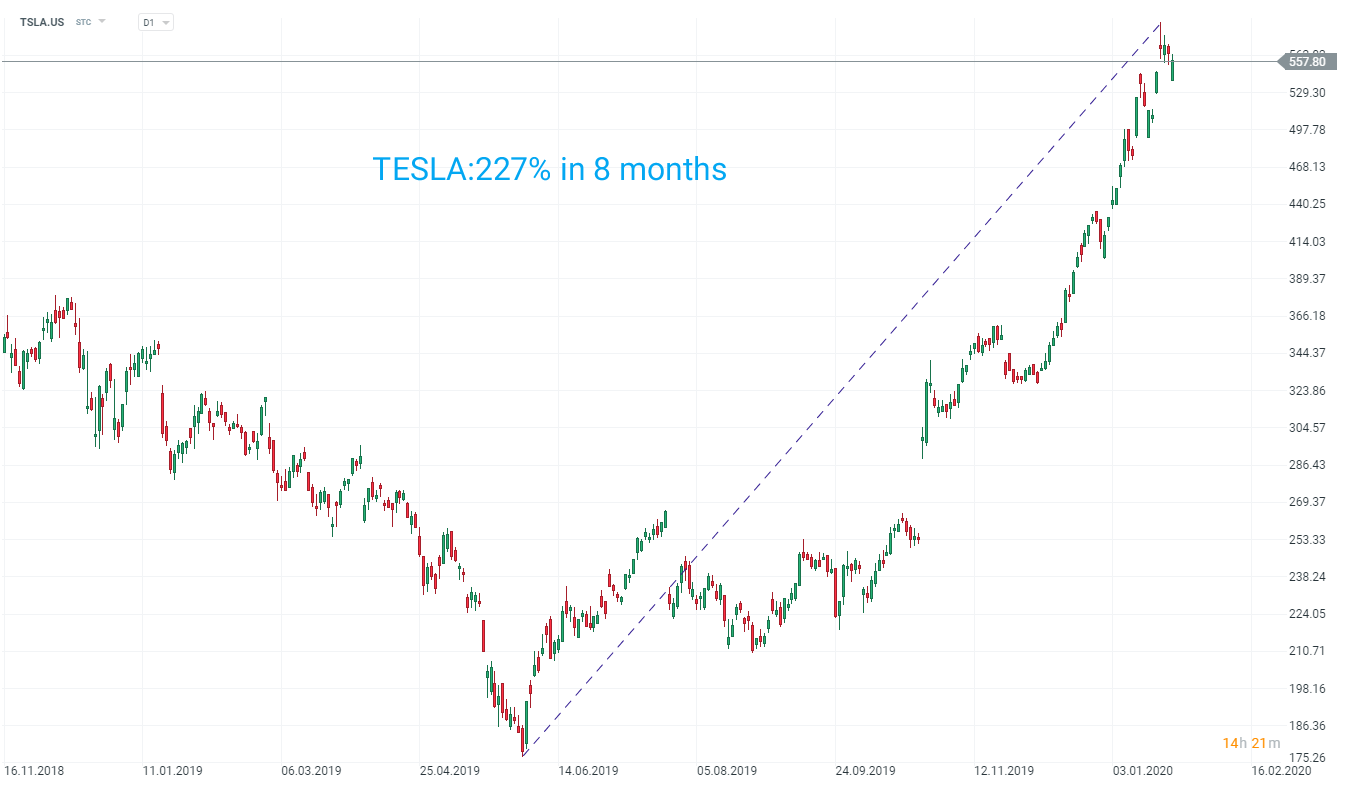 Tesla stock rallied at an incredible pace over the past 8 months. Source: xStation5

Will the competition respond?

Traditional automakers might have been late to the EV sector but they’ll try to play catch up. Volkwagen group plans to sell 1.5 million EV cars by 2025, GM 1 million by 2026, BMW 0.7 million, Hyundai and Toyoyta at least 0.5 million each but Toyota plans to focus on the hybrid role. That underscore two things: carmakers will be fighting for market share but also alternative technologies might gain traction. Right now it looks like hydrogen or fuel-cell cars are more of a fairy tale and the EV is the way to go but technologies develop fast.

While we need to look at least towards 2025 to debate market valuation the short term price response will depend on the quarterly report, that will be released this Wednesday, after the close of the US markets. After reporting a surprise profit of $143 million in Q3’19 (or $0.8 EPS), market consensus sees a slight decline to $125.6 million (or $0.71 EPS) on $7.05 billion revenue (down 7.6% y/y) . As we already know, the car deliveries were record high in Q4 so the market consensus for revenues looks a bit cautious. However, the EPS consensus is a big guess, for at least 2 reasons. First of all, Q3 profit was in large part a result of improved cost-to-sales ratio that Tesla attributed to higher efficiency. Was that maintained throughout the last quarter? Or will there be a repeat from Q4’18 when the ratio increased? Even bigger surprises can come from a potential non-operating loss. In Q3 Tesla recorded here FX related gain of $92 million that could be related to CNY liabilities. Since the Chinese currency strengthened in the final quarter, this could be a risk factor. 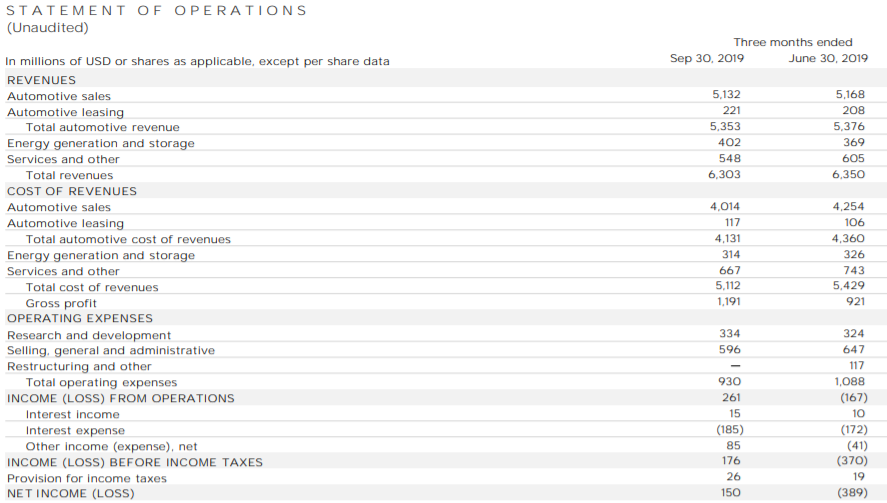 A surprise net profit in Q3 was a result of higher cost efficiency but also a significant non-operating income, that could be a one-off. Source: Tesla

The debate regarding the Tesla valuation will not go away for a long time. Looking just at car production and sales prospects it’s hard to see the company moving close to sector valuations until 2025. However, Tesla is about the future and with so many uncertain variables it can attract investors as long as it convinces them about the company upside.