Tesla is weakening despite the good data 📌 Shares facing problems?

Being one of Wall Street's favorite 'stock market horses' of the last 3 years, they are experiencing a massive weakening of stock market valuations this year. The stocks are losing nearly 5% today before the market open, despite news of record shipments and Friday's presentation of the 'Optimus' robot by Elon Musk, which resonated with the press.

Tesla reported vehicle production and delivery figures for the third quarter of the year. This year, deliveries totaled 343,000 vehicles with total production of 365,000 models (however, these deliveries are the closest approximation of projected quarterly sales).A year ago, in Q3 2021, Elon Musk's company reported deliveries a level of 254,695 cars with 237,823 production.  However, the nearly 40% year-on-year increase proved unsatisfactory to analysts and failed to satisfy Wall Street's appetite for growth. Forecasts according to Street Account (Fact Set) settled on deliveries of 364,660 units. Production of the most expensive S and X models totaled 19,935 units, with the vast majority of production coming from the more affordable 3 and Y models.  The increase came despite rising raw material prices, problems at gigafactories (overcrowded plants) and turnover, the most high-profile of which was the departure of AI division head Andrei Karpathy in July of this year. According to data from CPCA (China Passenger Car Association), Tesla has done well in the Chinese market and has upgraded its main factory accelerating production and deliveries despite the suspension of the Shanghai plant in July. Production at plants in the US is also promising well. The factory in Fremont (Califirnia) reported record production. It was also reported by the new factory in Austin (Texas), production there has already reached 1,000 cars per week.

Elon Musk has accustomed the public to being a visionary, but consumers are already familiar with the images of the future spun by the billionaire. The presentation of a humanoid robot dubbed 'Teslabot' or 'Optimus' at AI Days, however, did not turn out to be a milestone in the history of robotics, although there were some important declarations from Musk that may herald further moves by Tesla. According to Musk, in the future, profits from the sale of Optimus will eclipse the profitability of electric cars, and the company will refine and adapt its next iteration for mass production within 'a few months... or years." Work on Optimus took six months. The robot performed basic tasks, moved around and watered flowers, and gained a more aesthetically pleasing housing camouflaging hundreds of wires. The target market price of the robot is expected to be less than $20,000, the opportunity to buy it will eventually be given to everyone, of course, not just Tesla factories where it is to be used and tested first. The future outlined by Musk, however, currently seems so improbable or distant that investors will not consider it today as a serious catalyst for stock growth. 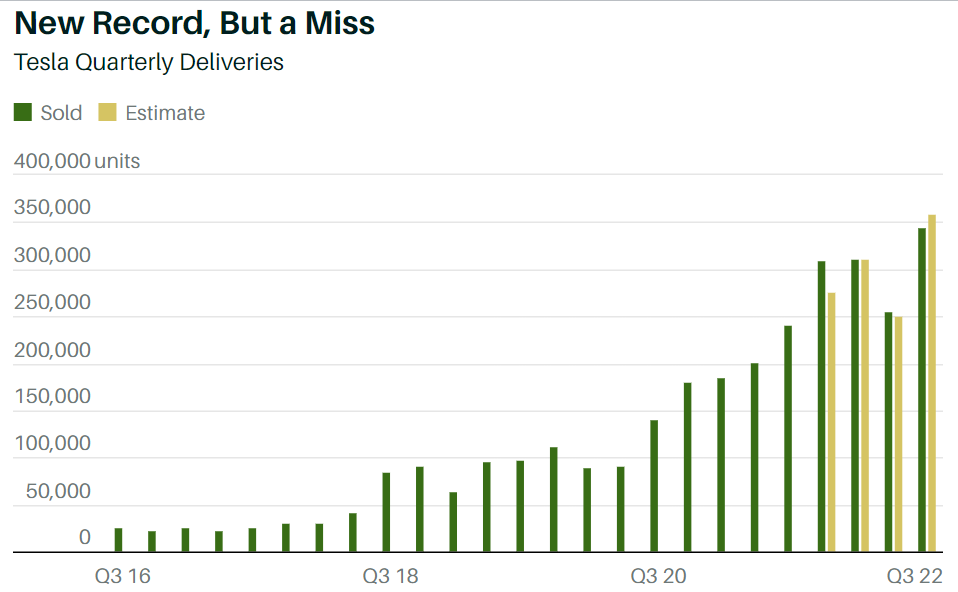 Despite reporting record quarterly car deliveries on a historical basis, Tesla failed to meet the exuberant expectations of analysts (whose regular beating so far has been the reason for such a high share price). Analysts had expected deliveries in excess of 350,000 vehicles. Wall Street may interpret the fact as a 'swallow that heralds weakness' and lower forecasts. Source: Tesla, Bloomberg, FactSet

A victim of its own success?

Although the company is still doing well operationally and scaling its business its stock, even after recent sell-offs, seems very expensive today. Of course, the valuation is a synergy of many pro-growth factors such as operating in the electric car sector, which is gaining popularity and favor with governments, being a market pioneer, business expansion plans (automatically controlled cars, humanoid multifunctional robots), Elon Musk's media personality and reach, good company management and regularly beating estimates. However, it looks like, at least in the short term, Tesla is likely to become a victim of its own success due to analysts' increasingly inflated forecasts - increasingly difficult and ultimately impossible to beat in a deteriorating macro landscape. Elon Musk has been able to build SpaceX almost from scratch, which has unprecedented partnerships with NASA but doesn't seem to have enough power to increase appetite for cars, on the part of a faltering market. This spring, Musk himself warned employees that he expected the economy to slow on an unprecedented scale.

The pin inside the balloon

Tesla's stock price has risen nearly 10 times since its pandemic bottom in March 2020. The company is trading at fundamental price-to-earnings ratios of more than 90 points and price-to-book-value ratios of more than 22 points, both of which are more than 400% upside deviations from the norm for companies in the NASDAQ index. Fundamentally, therefore, the stock price, despite the large correction, is still 'inflated' in the face of weakening shares of other listed companies, which may herald a tough stock market period for Tesla due to lowered revenue forecasts and a more defensive investment approach on the part of funds and individual investors. The failure to meet expectations around car delivery and the presentation of Optimus, which while looking fascinating still fails to address the basic problems with AI (repetitive actions, lack of sufficient self-learning and abstract thinking capabilities) may prove to be a harbinger of deeper declines.

Tesla chart, D1 interval. The company's shares have been in a dynamic uptrend since 2019, which is currently being tested by an uncertain macroeconomic and geopolitical situation. Negative investor sentiment makes them run market news through a slightly different filter. A downward gap in pre-session trading suggests an opening near $250, which would mark the biggest drop from the 200 SMA on the daily interval since 2019, when Elon Musk took the company to 'upward trajectory' and a possible reversal of several years of upward trend to downward. An unusually high price-to-earnings ratio could provide a 'window of opportunity' for market bears to lower Tesla's revenue growth forecasts and herald deeper weakness. Also worrisome is the triple peak formation near $350, which could add fuel to declines. Looking at previous years, however, the basis for at least a short-term unwinding seems solid. The price has fallen below the 200-session average for the second time this year (this accumulation should be of concern), which each time previously provided strong support for the bulls (2019,2021,2022). Historically, the quotations quickly returned to the main upward trend.  Source: xStation5