Trudeau’s Liberal Party is expected to win the federal elections held on Monday in Canada, albeit the party will lose its majority. After counting more than 90% of votes, the Liberals are projected to gather as many as 156 seats in the House of Commons, down compared to 177 seats held in the current standing. At the same time, the Liberals’ largest rival the Conservatives are expected to boost its presence in the lower house with 122 seats, up from 95 seats currently. The third place should be for the Bloc Quebecois gathering 32 seats and the fourth place for New Democratic Party getting 24 seats.

This outcome seems to be largely in line with recent polls suggesting that neither the Liberals nor the Conservatives would be able to reach a majority (170 seats). It means that the Liberals will be forced to enter into a coalition with the pro-labour New Democratic Party being the most likely partner for Justin Trudeau. From an economic point of view no major changes in the current course in Canadian politics should be expected, the notion being widely shared by the FX market as the Canadian dollar remains remarkably muted this morning. Either way, a possible risk (because each election poses such a risk to some extent) for the Loonie has just been removed which could be slightly supportive of the CAD. 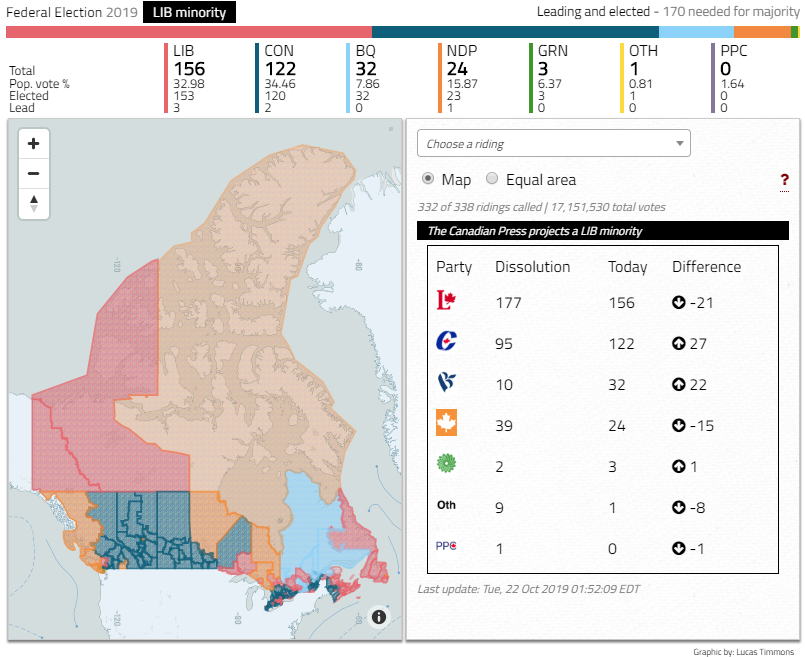 The Liberals are likely to win the federal elections in Canada with a lower number of seats in the lower house though. Source: macleans.ca