📢Are we heading for a global crisis❓

The Fed ignores recession risk and intends to continue its restrictive monetary policy. How may the markets react?

"I think we now understand better how little we understand about inflation”, said Jerome Powell at a conference organized by the ECB. In principle, these words should not require a comment, but on the other hand they show that central banks will probably move towards recession. In this article, we will try to show whether we are actually dealing with the specter of a global recession and how major global markets can react.

A massive decline in economic activity

Recent data on economic activity in the United States have not been very satisfactory. PMI indices fell sharply, which was preceded by a step decline in the regional indices presented by the Fed. In the past, most of the deeper drops of the Philadelphia Fed Regional Index heralded the beginning of the recession. Of course, one can find periods when this did not happen, but at this times monetary policy was not strict. Currently, almost every Fed member says that policy must become restrictive (rising interest rates above the neutral rate) in order to  tackle inflation.

Regional indices, such as the Philadelphia Fed's business outlook index, show that federal indices should see a significant drop, even close to the expansion limit (50 points). Source: Bloomberg

The market still hopes that the Fed, seeing the current economic problems, will moderate its position. However, the Fed has completely changed its attitude compared to what happened a year ago. Powell's behavior shows that he does not want to repeat the situation from the 1970s, when the economy entered an inflationary spiral. This is why we can hear statements such as "we are not sure whether the economy will go into recession", "it will be difficult to achieve a soft landing", "there is more risk that the Fed will not hit its inflation target than that it will go into recession" .

Despite the fact that many indicators point to a risk of recession, we still observe a very strong labor market. We also do not see a longer period in which the yield curve (difference between 10 and 2-year yields) is inverted (negative). The Fed itself indicates that the economy is still strong, which is mainly driven by the labor market. The unemployment rate is extremely low, reaching pre-pandemic lows. Nevertheless, the number of applications for unemployment benefits should indicate whether or not we are dealing with a recession. The number of initial applications has already significantly rebounded from 166k in March to 229k. last week. On the other hand, the number of continuing applications rose only slightly. Deutsche Bank indicates that a clear signal of the coming recession would be an increase in the number of continuing claims to approx. 1,450k. (currently 1,315k). If such a rebound occurred, we could expect a recession within the next 2 months. 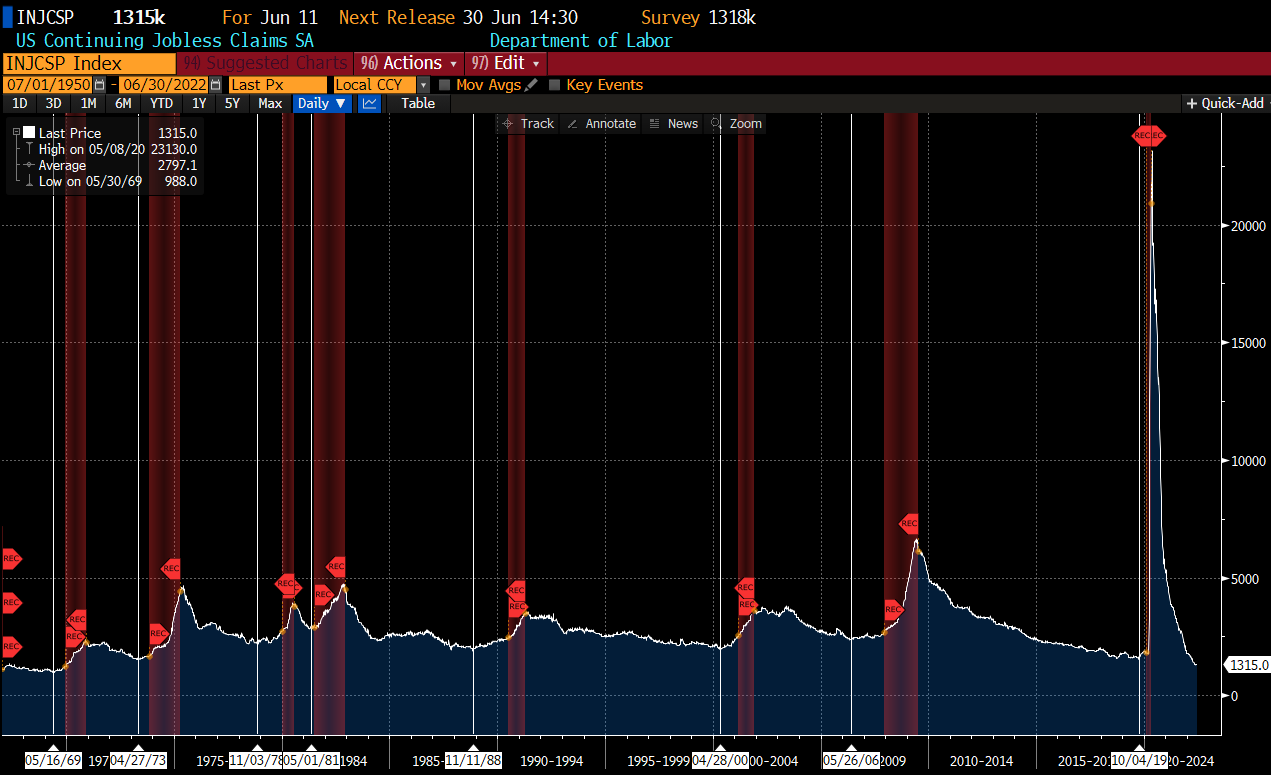 Theoretically, continuing claims have already started to rebound, but are just 1% above the low of May 20, 2022 (level of 1,306k). If continuing claims will rise more than 10%, the countdown to the start of the recession could begin. Source: Bloomberg

History shows that the situation can get even worse.

The start of the recession in 2007 coincided with the peak of the S&P 500 index. From top to bottom, the index fell more than 55%. In the post-2000 crisis, the S&P 500 index fell by almost 50%. It is worth noting, however, that the technology bubble burst in 2000, but the crisis did not start until the beginning of 2001. If we compare this situation with the current one, we can find many similarities. Stocks have been weakening since the end of last year since the Fed indicated that inflation was not temporary at all. Additionally, the specter of a technical recession hangs over the US economy. Q1 brought a decline in GDP and data on economic and consumer activity suggest that Q2 figures may also dissapoint.

The S&P 500 index is now behaving similar to early 2000. However, the GDP data for Q2 will be published at the end of July and only then will we get the answer whether we are already dealing with a technical recession. During each previous recession periods, the S&P 500 index fell sharply. Source: Bloomberg, XTB

Where to look for stability?

So far, the S&P 500 has dropped 20% from its all-time high. If soft landing cannot be achieved and a recession begins, the indices may continue to decline. In the past, gold provided some stability, at least in the first phase of the recession.