Headline inflation in the Chinese economy accelerated in November to 4.5% from 3.8% annually, quite easily beating the Bloomberg consensus suggesting a pick-up to 4.3%. Similar to several previous months, growth in the past month was again fuelled by surging food prices going up jointly by 19.1% compared to the same period last year. Another record pick-up was registered in the case of pork prices which soared 110.2%, it was the second triple digit increase in a row. At the same time, prices of other kinds of meat increased noticeably being already close to a 20% annual growth rate, as evidenced by the chart below.

Anyway, some signs of stabilization in pork price have occurred. First of all, on a monthly basis pork prices moderated from roughly 20% to just 3.8%. Secondly, China's pig herd expanded 2% MoM last month for the first time in a year, according to the Ministry of Agriculture and Rural Affairs. Finally, core prices including services have not seen any acceleration yet, thus it suggests that domestic price pressures remain muted. Therefore, when supply-driven food inflation begins subsiding, then the PBoC may again look bolder at further monetary easing. 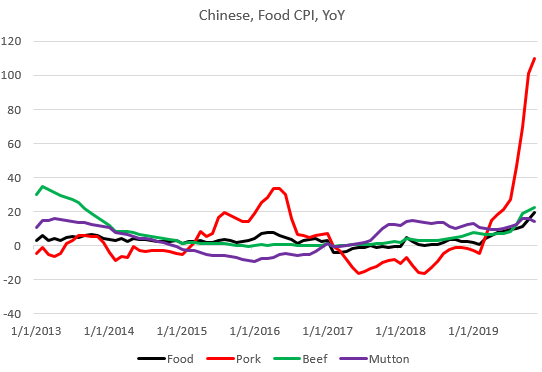