It looks almost certain that Europe is heading for the biggest energy crisis in history. European countries made themselves dependent on energy imports from non-EU countries, especially Russia, and have neglected supply diversification and their own production capabilities. Cheap gas made the European economy more competitive and allowed for the launch of energy transition. However, it becomes more and more clear that alternative energy sources will be unable to make up the shortfall in electricity production from more traditional sources. Embargoes and "penalties" for use of high emission energy source are hitting European competitiveness and may push Europe into a deep recession.

Storage facilities are full but deliveries remain a problem

Natural gas was a very cheap energy commodity for Europe over years as it was mainly imported from Russia. Europe also had supply agreements with other countries, including the United States, but gas from Russia was the cheapest. This is why reduction of Russian gas exports to Europe to just 20% of pre-war levels and a risk of complete halt to supplies is driving gargantuan price increases. Natural gas prices sat below €30/MWh before Covid pandemic but now are around 10 times higher than that. 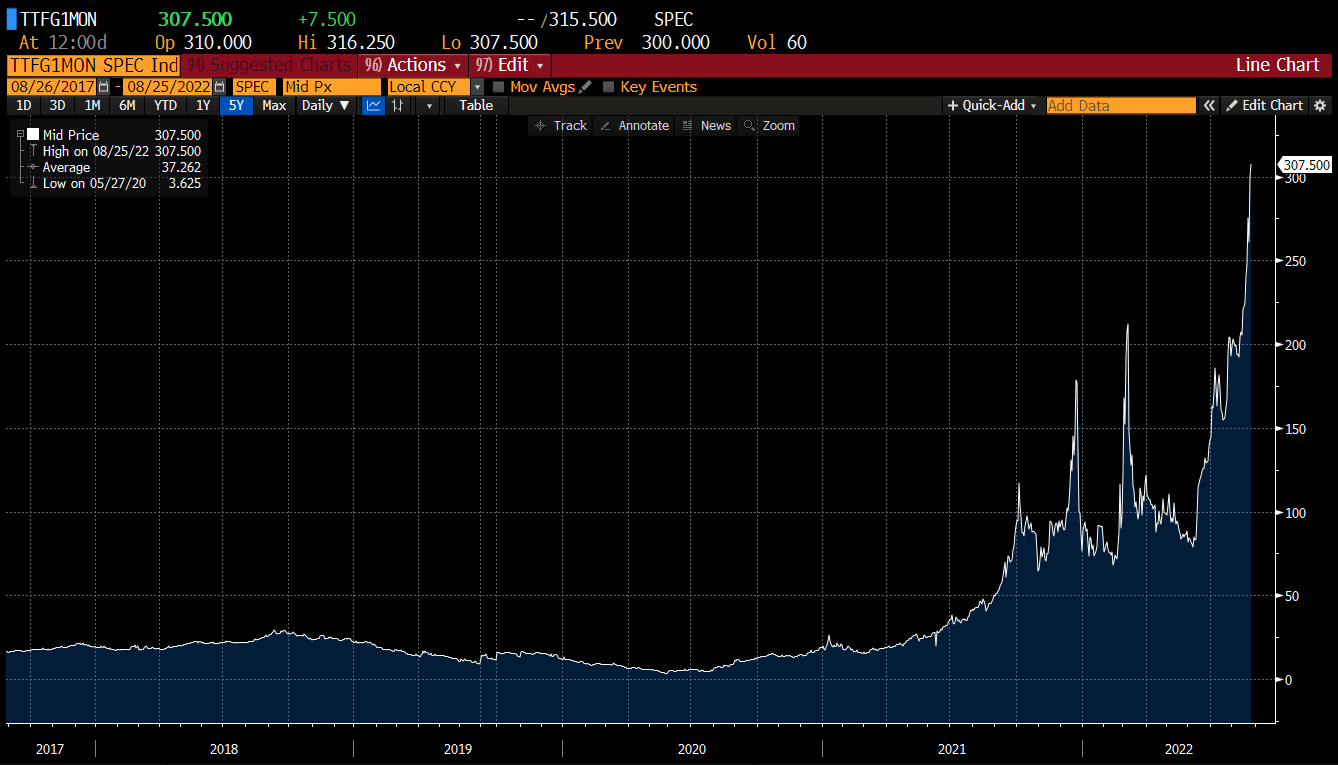 European natural gas inventories are almost 80% full. This means they are more full than they were at any point of 2021. Why are markets so concerned about supply and why prices are so high? Current inventory levels will last for 2 month of consumption, considering a complete halt to deliveries. If all of those stockpiles are used now, there will be no gas for companies to operate in summer 2023 and winter 2023 will be much worse than winter 2022.

European gas inventories are almost 80% full. This is driven mostly by diversification of imports but also by lower natural gas consumption. Source: Bloomberg

Who will suffer the most?

Europe's competitiveness has been hit by a massive surge in energy commodity prices. Energy prices for immediate delivery as well as for a year-ahead delivery have increased several times compared to year-ago levels. Terms of trade for euro or other European currencies sit at the worst levels in history. Big jump in import prices compared to export prices is an inflationary scenario, which may lead to a quicker interest rate hikes and therefore have a negative impact on economic activity. Terms of trade in EUR (according to Cit) plotted against EURUSD exchange rate. Source: Bloomberg

The hit may be bigger for some sectors of the European economy than for the others. Of course, energy companies use the most natural gas but chemical companies, refineries or paper plants are also big consumers. It cannot be ruled out that companies will start to decrease production or even halt it altogether in response to sky-high gas prices. 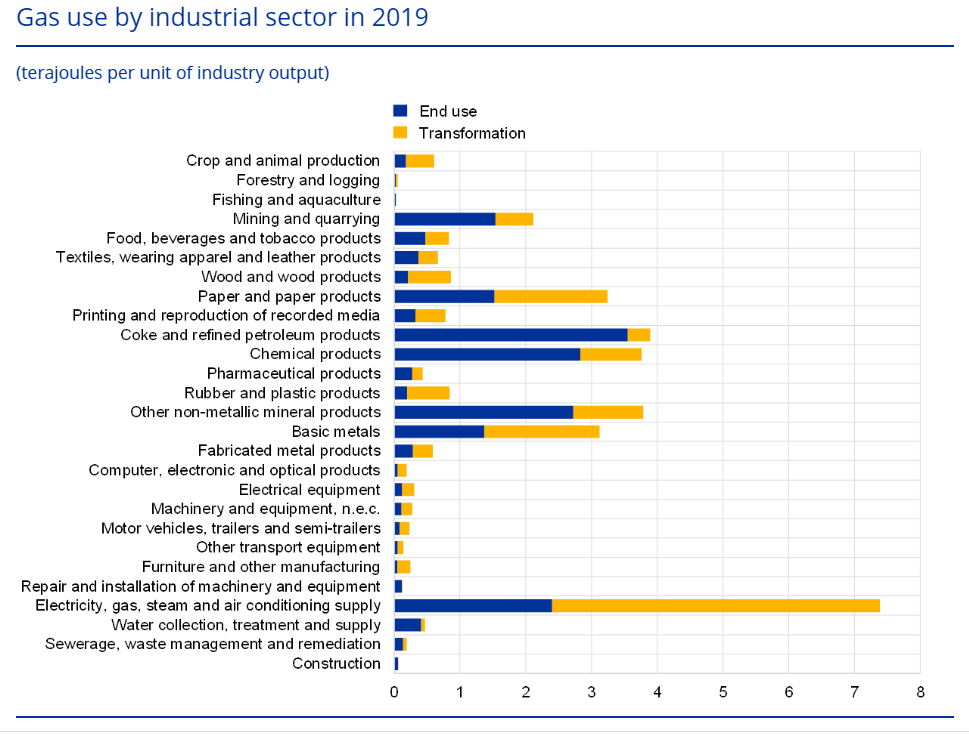 Natural gas use by sector of the European economy. Source: ECB

Are there alternative energy sources?

Natural gas was and still is a preferred energy source in the European Union on its quest to get fully independent from fossil fuels. However, electricity production from coal or even nuclear power plants is cheaper given current natural gas prices. The problem here is reluctance to restart coal power plants, even as this type of production is three times cheaper. However, there is some change on this front - Germany decided to restart lignite coal power plants while Sweden started to generate energy from oil combustion. Nevertheless, this may not be enough to avoid supply problems, even if plans to temporarily halt emission trading go ahead.

Higher energy production from coal or use of heating oil means higher demand for CO2 emission allowances. EMISS prices dropped recently but a relatively small number of auctions is scheduled for December, what may see EMISS jump above €100 per contract. Source: xStation5

What about US natural gas?

The United States is secure when it comes to energy. The country is not only using its own resources but is also a net exporter of energy commodities. European gas prices are over 8 times higher than in the United States while electricity prices are 4-6 times higher. In theory, there is a big economic incentive to boost exports to Europe. However, infrastructure is an issue. Should Europe stick to plans to isolate Russia and decide to keep emission trading scheme in place, demand for US natural gas may continue to increase.

US natural gas stockpiles are relatively low compared to a 5-year average. However, looking at the past 10 years, the situation isn't that bad. Nevertheless, we should not expect a drop in domestic demand and foreign demand will continue to grow. Having said that, one can assume that a period of low natural gas prices is over. Differences between current US stockpiles and 5-year average compared with current US natural gas prices. Prices may remain at elevated levels as there is pressure to increase exports and expectations of continued strong domestic demand. Source: Bloomberg

Is there a chance for improvement?

Pandemic has shown that demand for certain products can be greatly reduced in short-term if circumstances require it. Oil demand dropped by as much as 25% due to the pandemic. Consumers should not be afraid of lack of heat but should be ready to pay higher prices. On the other hand, willingness to reduce gas consumption alone will act to reduce demand. There is no shortage of commodities in the world but the situation is unlikely to improve ahead of winter due to lack of proper investments in recent years. However, there is a chance that joint actions undertaken by European countries and more balanced consumption will help improve the situation in the coming years.

One of the companies that may be of particular interest to investors in December is CD Projekt, mainly thanks to improving Cyberpunk ratings and the premiere...

The US Energy Information Administration reported today that domestic supplies of natural gas decreased by -81 billion cubic feet for the week ended November...

The German benchmark index is weakening after reaching its highest level in six months. W1 chart The DE30 fluctuates between gains and losses this...