The US Q2 earnings season will kick off at the beginning of the next week. One may expect that not only reported earnings will matter for stocks’ valuation, but guidance offered by companies should be equally important in assessing whether Wall Street has still some fuel to continue the bull market.

As it is usually the case, the bar ahead of Q2 earnings is set quite low as the median estimate of analysts’ predictions points to a 2.6% contraction in annual terms, according to Factset data. If history could be a guide for the future one may expect that these not demanding expectations should be quite easily beaten. This the case in the past when the earnings consensus (SP500) was beaten by 4-6%. That’s why somewhat dismal expectations before the Q2 season need to be treated with a grain of salt. What’s important, in our view earnings will not be the sole crucial measure to watch this time around as guidance offered by companies ought to be equally noteworthy. Such notion stems from the fact that US firms need to take into consideration some crucial aspects like the ongoing trade dispute with China, a degree of monetary easing which could be delivered by the Federal Reserve and overall global demand conditions. Keep in mind that some sectors including IT and materials are particularly exposed to foreign demand, hence guidance offered by firms from these sectors could even more important.

In spite of the fact that the SP500 has recently reached its new all-time high, the index does not look to be overwhelmingly overvalued based on a standardized P/E ratio. Source: Bloomberg, XTB Research

Given that expectations do not look demanding one may suppose that they should be beaten, hence it may offer a boost to Wall Street in general. Of course, a lot has changed since the Q1 earnings season in terms of stocks’ valuation in the US, however, based on the P/E ratio one cannot say that the current valuation is undue. Moreover, after standardizing the P/E ratio (it takes into calculation a 2Y window of weekly data) for the three major US indices we have arrived at a conclusion that US indices may have still some space to positively respond to better-than-expected earnings. 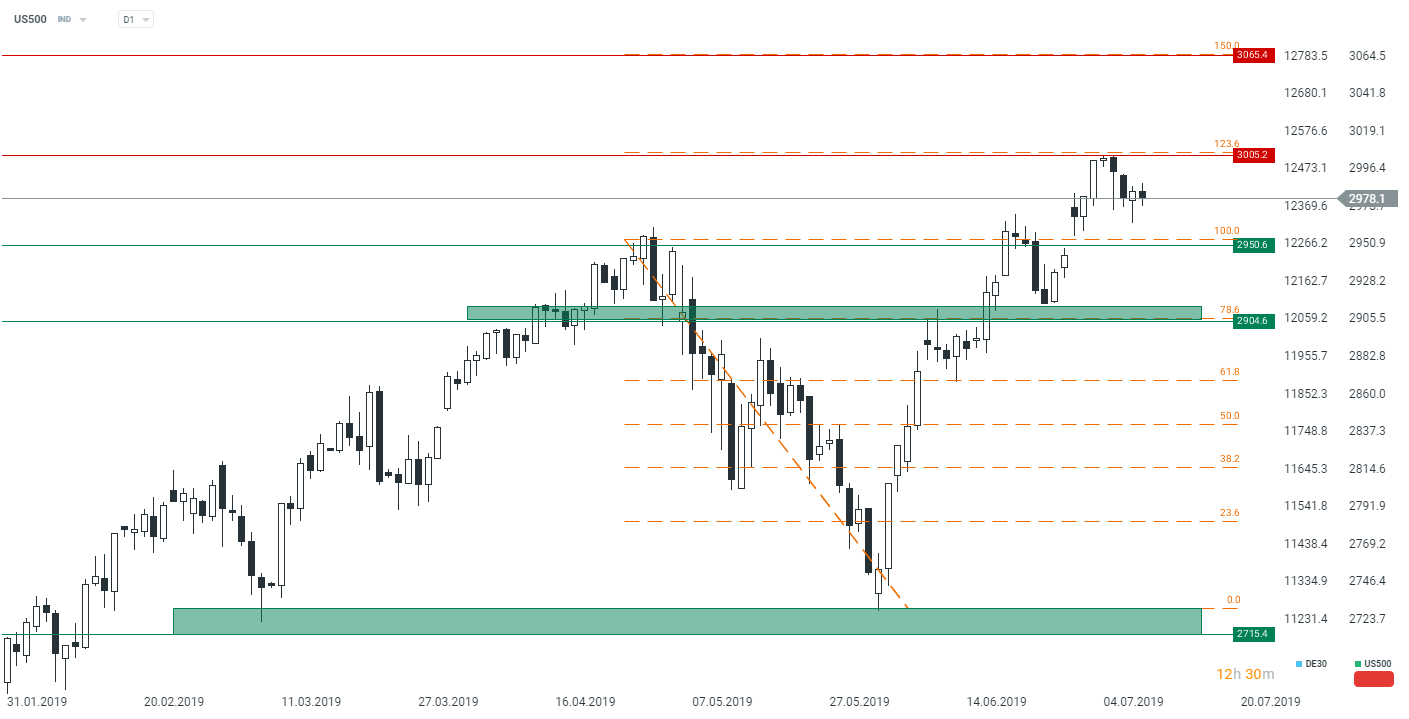 From a technical standpoint we are seeing a retreat in the SP500 (US500) after striking the 123.6% retracement of the bearish swing from May. Some important support may be determined at around 2950 points and 2905 points. In turn, major resistance levels may be found in the vicinity of 3005 points and higher nearby 3065 points, the 150% retracement of the mentioned swing. Source: xStation5