Financial markets remain rather cautious this morning despite a slew of positive comments from the US-China trade front we have been offered in recent hours. First of all, US Treasury Secretary Steven Mnuchin said on Monday that both countries, the US and China, made a lot of progress, and Chinese officials’ planned travel to Washington at the beginning of the next month was a “sign of good faith”. Moreover, in his interview in Fox Business Network Mnuchin added that a conceptual agreement on enforcement concerns was worked out. These upbeat comments were supported by further information coming from US President Donald Trump that the US is going to be talking with China as soon as next week. Nevertheless, investors seem to be cautious as major indices in the US closed nearly flat and the similar pattern has also been seen across Asian markets with two exceptions - Australian index falling 0.7% and South Korean KOSPI driving up 0.5%. As far as the latter is concerned, we may notice that the price has already approached its crucial technical obstacle which might slow the ongoing rally.

Buyers would have to break above the upper limit of the channel once they want to continue their rally. Source: xStation5

In August Chinese consumer price index remained unchanged at 2.8% while market expectations had called for a tiny deceleration to 2.7% in annual terms. The prime reason behind such an increase were food prices moving up as much as 10%, with pork prices soaring almost 47% and other meats (beef, mutton and chicken) rising between 11.6% and 12.5%. Fresh fruit prices also contributed to a rise in overall inflation last month by jumping 24% compared to the same period last year. Looking ahead, nothing suggests that upward pressure on food prices could subside given the protracted swine fever outbreak, hence elevated prices could stay in place with risks that some second-round effects will arise sooner or later. Nevertheless, so far so good, and current persistence in Chinese inflation is viewed as driven solely by exogenous factors, that is why the People’s Bank of China chose to cut the reserve requirement ratio on Friday and even more cuts appear to be in the pipeline. 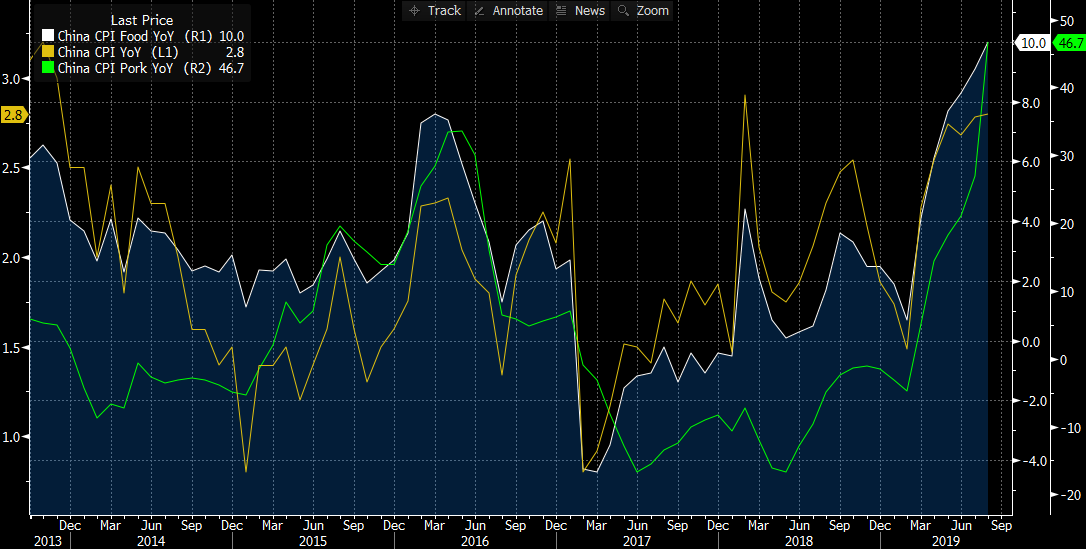 Persistence in Chinese inflation is largely driven by soaring food prices stemming from the African swine fever outbreak which has yet to be eradicated. Source: Bloomberg

Dow Jones Industrial Average's spot index has recently hit an all-time high. In the case of contracts, however, it can be seen that such levels have...