The upcoming NFP report (Friday, 1:30 pm GMT) will be closely watched by market participants. While US jobs data is always high on the agenda, the report for November may cement expectations ahead of the FOMC meeting scheduled for December 15, 2021. Fed Chair Powell has hinted earlier this week that a quicker pace of taper may be needed against the current economic backdrop.

Fed Chairman Powell made a hawkish turn during his congressional testimonies this week. Head of the US central bank said that it may be appropriate to adjust the pace of tapering during the upcoming meeting in December and finish asset purchase tapering a few months sooner. Moreover, Powell has also said that inflation should no longer be seen as transitory. This is a big shift from Powell and may suggest that the Federal Reserve will turn its focus back to inflation, should the jobs market recovery continue to progress. It may be about time to take a more decisive action as US wage growth continues to accelerate and threatens to result in a wage-price spiral, what would turn out to be a big problem for the Federal Reserve. 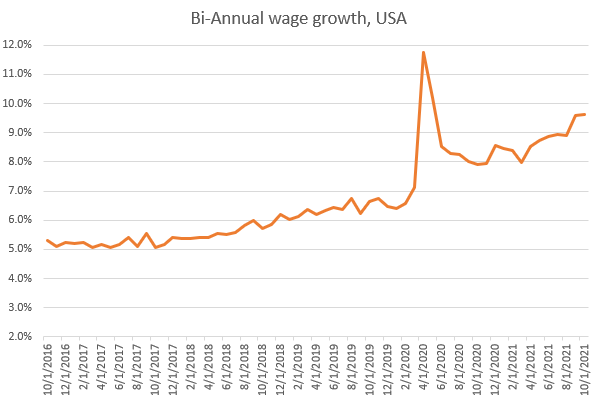 Wage growth in the United States continues to accelerate as employers have to boost wage to attract workers to come back to work. Such a situation creates a risk that employers will try to pass at least part of the increased wage costs onto consumers in terms of higher prices of services and goods, and therefore further fuel inflation. Source: Macrobond, XTB

ADP employment report released on Wednesday pointed to a 534k jobs increase during the month of November. While reading was more or less in-line with market expectations, it showed that post-pandemic recovery of the US labour market is still on the roll. ADP Institute said that job gains in the post-pandemic era exceeded 15 million but the employment level remains around 5 million jobs short of pre-pandemic levels. A continued drop in jobless claims also points to jobs market becoming tighter. 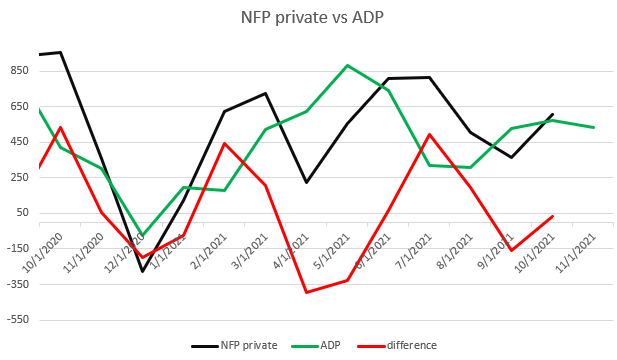 While the ADP report pointed to another month of strong jobs growth, it should be remembered that NFP does not always mirror ADP readings and the difference in some months is large. Having said that, there is still a scope for a surprise tomorrow. Source: Macrobond, XTB 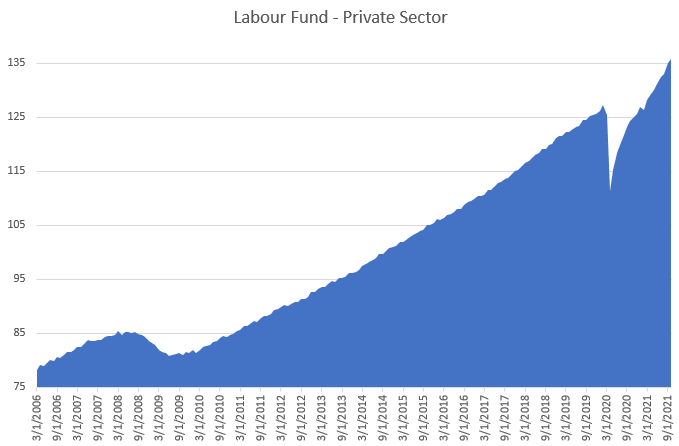 US labour fund - aggregate value of nominal wages - is back in-line with pre-pandemic trend. This is another evidence of very strong wage growth as data returned to the trend even as total employment level is still 5 million jobs short of pre-pandemic levels. Source: Macrobond, XTB

Unless the NFP report shows a big negative surprise, the decision on accelerating the pace of tapering during the December meeting looks like a done deal. Markets began to position themselves for such a scenario following Powell's testimonies this week.

Upward correction on EURUSD was halted at the 1.1360-1.1375 price zone, slightly above the upper limit of local market geometry, and the pair started to trade sideways following Powell's testimony. Short-term trading range is limited by 1.1360 handle from the upside and 23.6% retracement of recent downward impulse from the downside. Source: xStation5

Gold took a hit after Powell hinted at possible quicker pace of QE tapering. Price of the precious metal pulled back and is trading just a touch above the lower limit of the Overbalance structure at $1,765 per ounce. The upward trendline has not been breached yet but price is trading dangerously close to it. Source: xStation5

S&P 500 (US500) dipped below the 4,550 pts support marked with September's peak. Sell-off was halted slightly above the 100-session EMA (green line) and the index attempts to recover today. Key support - lower limit of the Overbalance structure - can be found around 3.5% below current market price. Source: xStation5

Netflix - Fall of the king?

Netflix (NFLX.US) had humble beginnings. Company started as a mail-based DVD rental business in 1997 when DVDs were becoming mainstream in the United States....

Flash PMI indices for January from France and Germany were released today at 8:15 am GMT and 8:30 am GMT. While the French release turned out to be more...