Quiet start to what promises to be a busy week

There’s been a rather sleepy feel to the markets at the start of the new week, with the subdued volatility and lack of sustained moves reminiscent of the sort of price action seen around Christmas. However, the calm mood is likely not the beginning of a sustained lull with several key events due this week which are expected to cause some frantic action.

From the UK perspective the main event is Thursday’s general election with Britons heading to the polls in December for the first time in almost a century. There’s been a distant lack of drama in recent days on the campaign trail and this increasingly favours the Conservatives who still hold a double-digit lead overall in popular opinion polls. Given the relative starting points of both the two main parties, the less eventful the campaign the more it favours the initial leader and hopes from Labour for a repeat of the surge in 2017 are slowly dwindling away. 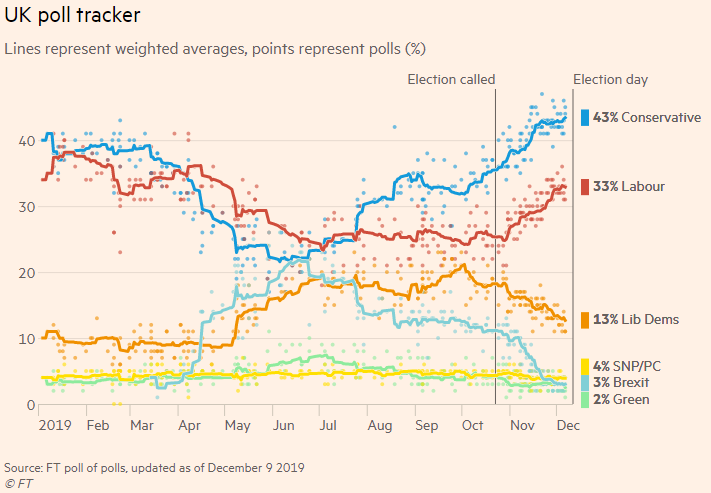 According to the FT poll of polls the Conservatives still enjoy a double digit lead over Labour ahead of Thursday’s general election (12th December). Source: FT

The prevailing wisdom in the markets at the moment is that a Conservative majority would be positive for the pound as it would deliver a greater degree of clarity on the next steps regarding Brexit and therefore it’s not too surprising to see the currency remain well supported. Sterling has eked out a new 8-month high against the dollar in recent trade while the GBP/EUR rate remains at its highest level since May 2017.

However, if FX markets and bookmakers are increasingly pricing-in a Conservative victory, certain derivatives markets are a little more cautious. Looking at options markets there’s a clear premium being charged for downside protection in the pound with the 1-month Risk Reversal for GBPUSD dropping to its lowest level since April. Without going into the specifics of how this measure is calculated, it shows that the premium options buyers are willing to pay for downside protection compared to upside exposure is at its highest level in almost 8 months. 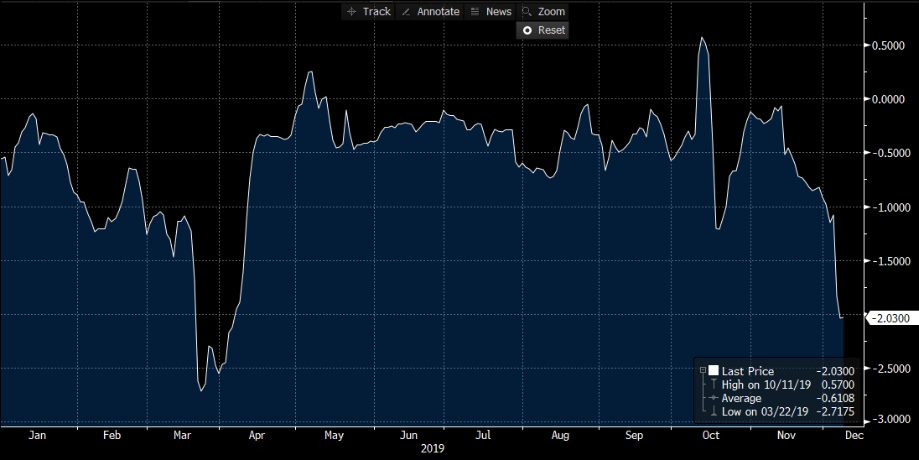 The 25-delta 1 month Risk Reversal for the GBPUSD has dropped sharply in recent trade, falling to its lowest level since April. This shows that option buyers are increasingly willing to pay a higher premium for downside protection over upside exposure in this currency pair. Source: Bloomberg

In almost any other week, the monetary policy decisions from the Federal Reserve and European Central Bank would be the highlights, but this time out they are unlikely to have as big an impact on the markets as the latest developments on the US-China trade front. This is due in part to both the Fed and the ECB being seen as highly unlikely to alter their current policy stance, but arguably more down to the impending December 15th deadline which if breached will see the US place scheduled 15% tariffs on $160B of Chinese goods.

While this is the default case, it is not seen as the most likely with the positive rhetoric from both sides in recent months leading the majority to expect at least a delay to the imposition of these new levies. Even though the Sunday deadline occurs when most markets will be closed, there will likely be several hints towards the likely outcome before then and this will probably be the main driver of risk appetite for the coming week.

A stellar US job report last Friday saw most major benchmarks recoup the bulk of the losses seen at the start of last week, as the yield on the US 10-year rose back near its highest level in a month and Gold finished lower after trading up by over $20 earlier in the week. In a similar manner to the pound, these assets appear positioned for a market favourable outcome (IE the additional tariffs not being slapped on) and therefore the larger reaction would come in the event of a disappointment.

Gold has been pulling back in recent months, in part due to rising hopes of a de-escalation in US-China trade tensions. Price has been below the 100 SMA for the past few weeks but as long as it remains above the 200 SMA (currently $1407) the prevailing uptrend could be seen as still in tact. Near-term the $1446 level could be worth watching for potential support. Source: xStation

It has been quiet about dairy prices on the market for some time. New Zealand dollar has been driven mainly by the actions of RBNZ and moves on the USD...