RBNZ - one and done or something more on the horizon?

The Reserve Bank of New Zealand chose to deliver a rate cut in May taking the main interest rate down to 1.5% from 1.75%, the first such a move since November 2016. Cutting through the statement one may arrive at a conclusion that external risks played the major role this month. The bank pointed to a larger than previously anticipated slowdown in the global economy, particularly in China and Australia - New Zealand’s major trade partners. In this regard, the latest news concerning a possible increase in US tariffs (Chinese retaliation should be only a matter of time) could add to these risks. In terms of the domestic economy, the central bank admitted that spending was weaker and it pointed to some headwinds in employment - all of that acted in favour of a further monetary stimulus. 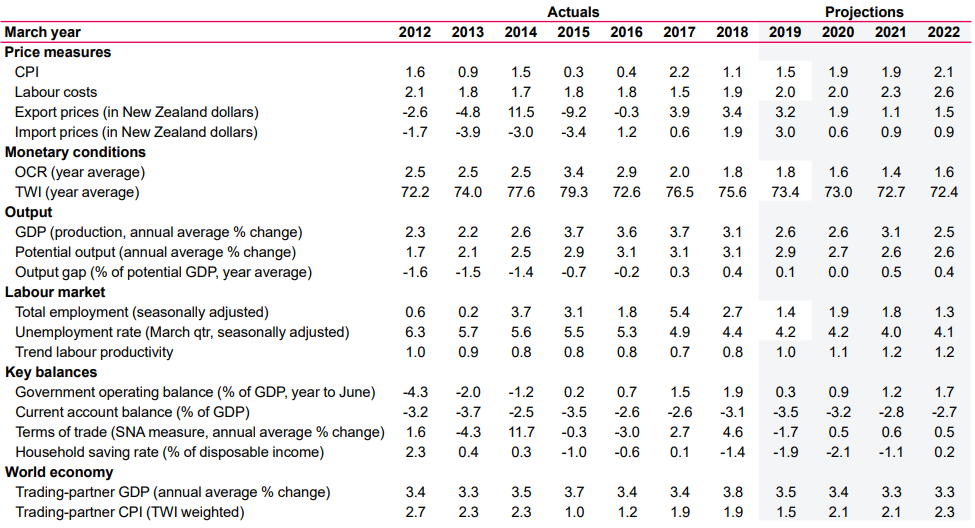 The RBNZ cut rates and altered its macroeconomic projections in May. Source: RBNZ

Although the bank claimed that inflation expectations remained well anchored at the mid-point of the target range, it did trim its inflation projections for this year and lifted for the following year. Currently the bank sees headline CPI at 1.5% in 2019, down from 1.6% and at 1.9% in 2020, up from 1.7%. Either way, the price growth is unlikely to exceed the RBNZ’s inflation objective markedly over the projection horizon. It also needs to be said that the central bank now forecasts lower labour costs in this and the next year predominantly due to higher productivity. GDP forecasts were also trimmed to some extent and now a rate of growth is seen at 2.6% in 2019 and 2020, down from 2.8% and 2.9% respectively. As far as the OCR is concerned, the RBNZ does not forecast another rate cut over the projection horizon as the rate is to bottom in 2021 at 1.4%. However, at the same time we do not see a strong case painted by the bank for higher rates in the foreseeable future. Instead, the bank could even deliver the second rate cut once economic activity, particularly abroad, deteriorated again. The NZ dollar did decline immediately after the decision but it has managed to recoup part for its losses since then (a rise in Chinese imports could have helped - we write about this topic below). Finally let us recall that the RBA kept rates on hold yesterday, however, after a cut delivered by the RBNZ one may expect that the Australian central bank might be pressured to do the same in order to prevent undue AUD appreciation vs. NZD.

The AUDNZD popped after the rate decision overnight nevertheless downward pressure has eased since then. As a result the cross is trading slightly beneath its crucial resistance at 1.0680. Source: xStation5

After a surge in exports in March we got a reversal of such a pattern last month as exports, in US dollar terms, declined 2.7% YoY, falling short of the median estimate of a 3% YoY increase. Simultaneously, imports also reversed their 7.9% YoY declined registered in March and jumped 4% YoY in April, beating the consensus of a 2.1% YoY decrease. Overall, a trade surplus in April was $13.8 billion, down from $32.7 billion in March. On the other hand, a surplus with the United States widened to $21 billion from $20.5 billion. Looking at the underlying trends one may notice that since the start of 2018 the overall Chinese trade surplus slightly declined but it did increase more than 17% against the US. By and large, the data showed an improvement in Chinese domestic demand despite unfavourable base effects. However, the latest developments regarding the trade war could aggravate these trends anew soon.