Stock of the week: Deutsche Bank

Summary:
- Deutsche Bank and Commerzbank launched formal merger talks
- Tie-up would create leader of the German retail banking sector
- Commerzbank’s bond portfolio seen as a hurdle
- German government seems to back the deal and allow for major jobs cuts
- Stock has been trading within a downtrend for the past year

What was rumoured for a long time time is slowly becoming a reality. Deutsche Bank and Commerzbank announced over the past weekend that they are launching formal merger talks. The two lenders saw their stock prices plummet as turnaround efforts were slow to take effect. However, the success may depend on the actions of the German government. In this analysis we will take a look at the story behind merger as well as advantages and risks coming along with it. 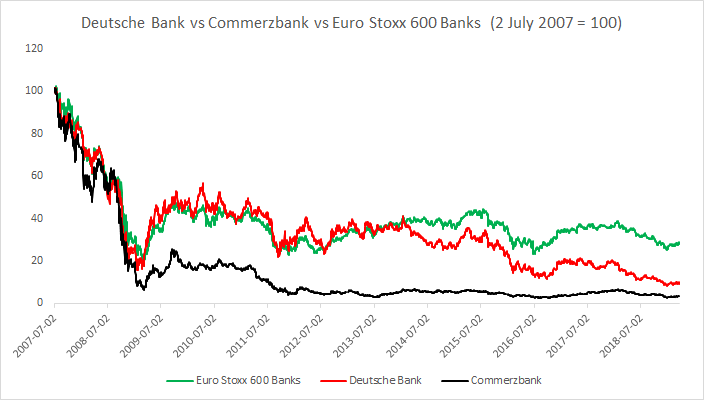 Before we move to discuss the merger itself it may be wise to take a look at how the two lenders coped during the past decade. The Deutsche Bank suffered much smaller damage during the financial crisis than its US peers and in turn did not require extreme measures like a bailout. However, for Deutsche real crisis began after the global financial one. Lacklustre or lack of revenue and earnings growth in most of the quarters combined with range of fines and corporate scandals caused Deutsche Bank share price to sink over 90% during the past decade. The post-crisis story of Commerzbank looks almost the same as the one of Deutsche. However, Commerzbank required a bailout in order to survive the financial crisis and now Germany holds 15% stake in the lender. Both banks launched turnaround plans but those were slow to take effect risking that Deutsche Bank and Commerzbank may not be in good enough shape once the next crisis hits.

Both Deutsche Bank and Commerzbank experienced steady decline of interest income during the major part of the past decade. One can notice that Commerzbank not only had less volatile earnings during the past two years but actually managed to stay profitable. Nevertheless, its earnings are over 10 times lower compared to pre-crisis times. Source: Bloomberg, XTB Research

Apart from that, depressed valuations increased threat that the two banks will gather attention as potential takeover targets. Both lenders play a significant role in the German exports-driven economy therefore country wants to keep both companies in German hands. This is especially true for Commerzbank that is one of the key lenders for the German medium-sized companies. The combination of the two entities could create a banking champion that German companies could rely on and that would be able to compete at the international level with the biggest global banks. This is more or less why the German Finance Minister, Olaf Schulz, is such a strong advocate of the tie-up. However, what opportunities and threats stream directly from this merger and will the balance of risk be good enough to justify the deal?

Let’s start with the benefits of the merger. The most apparent ones are cost savings and synergies in the retail banking business. The German retail banking sector experiences a high degree of fragmentation and in turn German cities are overcrowded with retail branches of various banks (1 branch per 2500 German citizens on average). Deutsche Bank and Commerzbank had around, respectively, 1400 and 1000 retail branches in Germany at the end of 2018 and some of those are likely to be closed due to overlapping. This is especially true with rising usage of mobile banking services that causes demand and need for costly brick-and-mortar retail branches to shrink. Moreover, the combined entity will have a stunning 20% share in the German retail banking market and over 35 million personal and corporate clients.

However, not everything is so rosy and straight-forward. A number of risks surrounds the deal. First of all, planned jobs cuts are likely to cause a public outrage. It is estimated that the merger may result in termination of anywhere from 10k to 30k jobs. Another risk factor is hidden in Commerzbank’s balance sheet. The lender is said to have a significant position in Italian and Spanish debt instruments. A merger would be a trigger for revaluation of its assets resulting in potentially significant write-downs on a bond portfolio. Failure to attract new capital needed to cover this  gap would have a negative impact on the capital adequacy ratios of a new bank and that could make it less attractive for investors in comparison with European peers. Finally, combining two troubled banks not necessarily creates a strong one. Both Commerzbank and Deutsche had more than enough time to get at least close to profitability measures of other European lenders so struggles may result from internal factors (like inefficient management). In such case neither merger nor additional capitalization would put aside factors to blame for the current situation of the two lenders and combined entity could be considered “troubled” since the day it was formed.

Shareholder structure of both banks is dominated by institutional investors. Cerberus and BlackRock may have a say in the merger due to their significant holdings in both banks. Cerberus is all in for the merger while BlackRock’s decision is yet to be known. Source: Commerzbank, Deutsche Bank, XTB Research

Whether the merger will be completed or not is a subject to stakeholders decision. Cerberus Capital Management (holds noticeable stakes in both banks) and German government (holds a big stake in Commerzbank) are all in for it. Board members representing labour unions are unlikely to back the deal unless the government gives “green light” to planned jobs cuts. Germany may use “national champions” fund (launch planned by the end of 2019) to provide additional capital for the post-merger bank. However, such a solution is likely to face shareholders’ resistance as it would dilute their holdings. Another shareholders’ concern may be voiced over management of the new entity. Current Commerzbank CEO, Martin Zielke, is viewed as better and more successful executive then Deutsche Bank’s Christian Sewing. However, as Deutsche Bank is likely to be acquirer in this deal, it is also likely that Deutsche Bank executives will hold top jobs in new bank. Summing up, getting necessary approvals for a deal will be tricky as solutions to some problems create problems elsewhere. It seems that the actions of the German government on jobs cuts and potential capitalization may be key to whether the deal will go through or not.

Last but not least, even if all ends well in the merger case it does not mean that the new German bank will perform significantly better than the rest of the European banks. Economic slowdown and uncertainty on the Old Continent is likely to cause businesses to postpone investments and may shrink demand for credit. Moreover, extremely low interest rates leave banks with little flexibility when it comes to margins. In turn, outlook for the European banking sector is much worse than, for example, the US one. Having said that, even merger conducted in a textbook manner is unlikely to create financial institution that will be able to bypass this underlying weakness and perform much better than European average.

Deutsche Bank (DBK.DE) has been moving within a downtrend throughout 2018. Downward momentum eased at the beginning of 2019 as merger rumours intensified. Confirmation offered over the past weekend spurred significant gains on Monday but the stock turned lower later on as concerns over the rationale began to mount. Source: xStation5

OIL.WTI failed to uphold bullish momentum and is set to end the week over 2% lower as worries of the Chinese pandemic situation and reports of a high price...

US30 highest since mid-August

Despite thinner liquidity conditions US30 kept moving higher and bulls managed to break major resistance at 34330 pts, where August 2022 highs are located....