The latest batch of economic data from the UK provides a fairly negative view on the recent levels of activity with the main takeaway being a flat GDP reading for the month of October. After two consecutive monthly contractions a reading of 0.0% does signal some improvement, but this should hardly be celebrated and it’s becoming abundantly clear that economic growth has essentially ground to a halt. After a return to growth in Q3 following the contraction in Q2 a technical recession will be avoided for now, even if the fourth quarter delivers a negative reading, but on the whole this is reflective of an economy that is barely keeping it’s head above water. 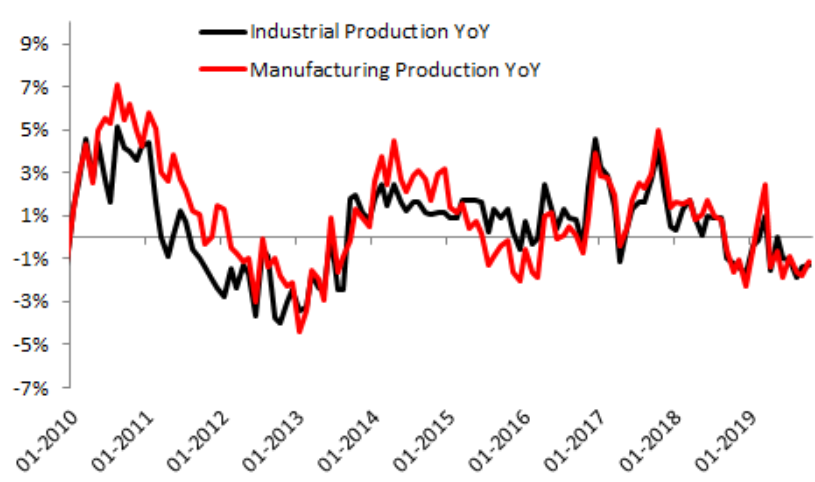 Even though both these metrics improved with the latest release, they are both still firmly in negative territory and not far from their lowest levels since 2013. Source: XTB Macrobond

Given the proximity to polling day, the latest round of data has taken a backseat in terms of market impact, with a fairly muted reaction. The main event of the day for the pound will likely come this evening at 10PM with the release of the eagerly anticipated MRP poll from YouGov. This survey gained credence as the pre-eminent poll after correctly calling a hung parliament in 2017 when nearly all other polls pointed to a Conservative majority. This will be the second reading on the forthcoming election from this source, with the first take forecasting a 68 seat majority for the Tories.

The previous release of the MRP poll last month caused a sharp move higher in GBPUSD, with the pair rallying by 50 pips in just over half an hour. There was also a pop higher prior to the release when a journalist who claimed to have seen the results tweeted that the poll was good for the Conservatives. Source: xStation

With the pound still trading firmly and near an 8-month high against the US dollar and 31-month high against the Euro it seems like the markets are positioning themselves for another Conservative victory. If there’s a similar showing of Conservative support in tonight’s poll  - or an even greater level - then it would serve to attract further buyers into sterling as traders look to front run their expected election outcome with an increasing degree of confidence. On the other hand, should the result forecast a drop below 40 in the Conservative majority then we may be flirting with another hung parliament and given the recent price action in the pound, we would probably see a sharper market reaction to the downside.

The GBPJPY broke higher following the prior MRP poll release and trades not far from a 7-month high of 143.27 made just last week. Source: xStation