The latest look at price pressures has shown a slightly higher than expected reading with the headline CPI Y/Y remaining at 1.5% against a consensus forecast for a print of 1.4%. After 3 consecutive lower than expected readings for this metric this represents a small upside beat and has seen a small move higher in the pound. The core reading of 1.7% was unchanged from the previous month and is close enough to the Bank of England’s 2% target to not by itself give too much food for thought amongst ratesetters ahead of tomorrow’s decision. 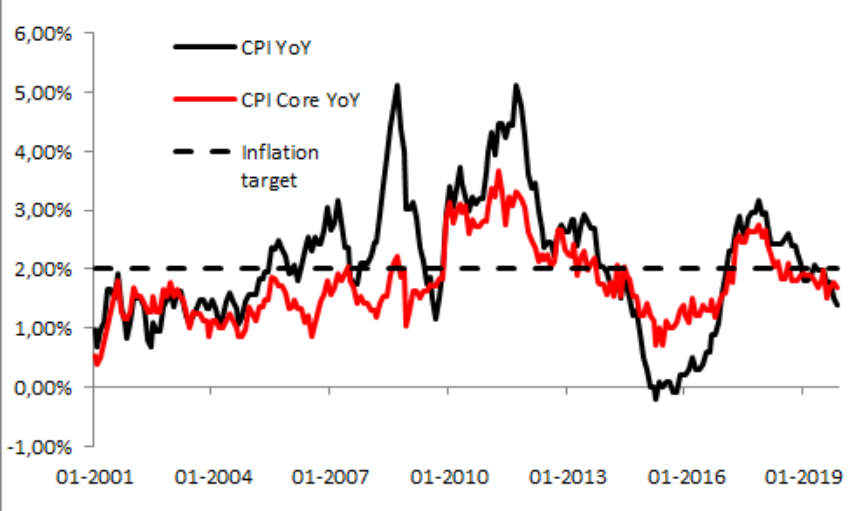 Both the headline and core CPI readings are below the BoE’s 2% threshold, although probably not far enough to warrant rate cuts. Source: XTB Macrobond

Following the 2 dissent of two voting members last time out there’s growing calls that the Bank may be set to loosen policy in the coming months, although the key determinant will likely be how they view the election result and what this means going forward. After being widely criticised for becoming politicised following the bank’s comments on the EU referendum it would not be at all surprising if they decide that the best course of action is no action at all and simply stand pat until there’s great clarity on the Brexit outcome. 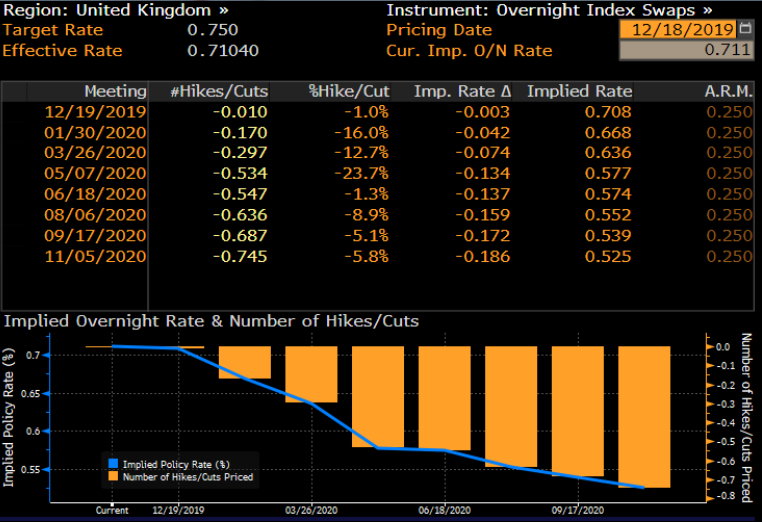 OIS markets are giving very little chance of a move from the BoE tomorrow, and still see a cut in the coming months as unlikely. One 25 basis point cut has been pretty much discounted by November 2020. Source: Bloomberg

The EUR/GBP rate had its largest drop in over a year yesterday as investors woke up with a sore head following a 4-day party celebrating the Conservatives victory,  during which most had seemingly forgotten that Brexit uncertainty is unlikely to disappear anytime soon. GBP/USD fell to its lowest level in a fortnight during the Asian session but has since bounced a little, receiving a further small boost from the beat in headline CPI.

EURGBP rallied strongly yesterday and has this morning just about moved above the daily high seen from last Thursday - the day of the UK election. The region around 0.8520 could be seen as possible resistance and a key line in the sand here - below there this looks just like a corrective bounce in a prevailing downtrend but a clean move up through it could signal the start of a larger correction. 8 and 21 EMAs remain in a bearish trend but price has just moved above them both in recent trade. Source: xStation

It has been quiet about dairy prices on the market for some time. New Zealand dollar has been driven mainly by the actions of RBNZ and moves on the USD...