❗ US CPI - another "transitory" acceleration?

📊 US CPI data for May to be released tomorrow at 1:30 pm BST

US CPI data for April showed much higher price growth than market expected. Inflation in annual terms reached 4.2% - the highest reading since mid-2008! Stock markets took a hit but concerns abated after Fed members continued to claim that high price growth is transitory. However, another acceleration is expected in May - this time to 4.7% YoY. The question now seems to be by how much must price growth accelerate for the markets to stop believing Fed?

US CPI inflation data for April showed a 0.8% month-over-month jump in the headline US price growth while annual dynamic reached 4.2% - both at the highest level since mid-2008! CPI inflation is set for another acceleration in May with market consensus expecting a reading of 4.7% YoY! Meanwhile, core gauge is seen accelerating from 3 to 3.4% YoY. Data will be release on Thursday at 1:30 pm BST. 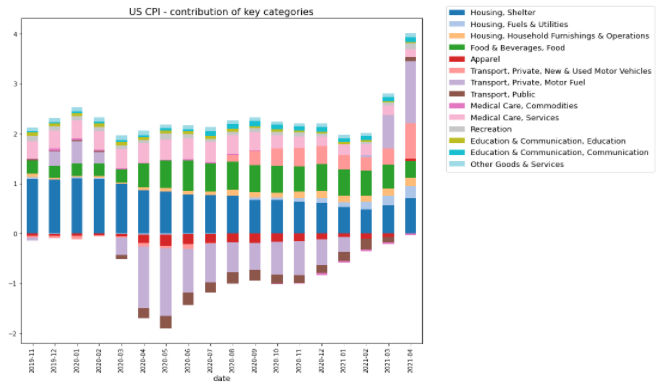 Prices increased in almost all major categories in April 2021 on the year-over-year basis. Fuel prices contributed the most to headline CPI reading. Source: Macrobond, XTB Research

Is it really transitory?

So far, it looks like investors' faith in the Fed was what prevented markets from experiencing any major reaction. Fed members continue to stress that pick-up in price growth is transitory and can be reasoned with low base effects. However, is it really so? Sure, April 2020 was a month when oil prices went negative and it was seen in the outsized contribution of motor fuels to April 2021 CPI reading. Nevertheless, as one can see on the chart above, prices increased in almost all major categories in April. Another large beat could give Fed less arguments to stick to its narrative, especially if it is accompanied by similarly "broad" pick-up in price growth.

US CPI inflation jumped above the upper band of Fed target. PCE inflation (Fed's favourite measure) is also on the rise, although pick-ups are smaller due to different composition. Source: Macrobond, XTB Research

Another issue that seems to bite into Fed's narrative of transitory inflation is wage growth. NFP report for May showed a much higher-than-expected increase in average wages. Note that wage growth cannot be reasoned with low base effect as average wages in the US spiked after the pandemic began (due to removal of low-income jobs from the equation). Moreover, wage growth is seen as a more persistent source of inflationary pressures. Having said that, another major beat in US CPI is a potential risk event for equity markets as it may show investors that Fed is simply wrong. Data release will also be closely watched as it comes less than one week before the FOMC meeting (it will be a quarterly meeting so it will also include new macro forecasts).

US100 dropped below the 13,000 pts mark following release of April's CPI data. However, this also marked the end of a short-term correction with the market starting to regain ground later on. US tech index is trading less than 2% below its all-time highs and has been an underperformer among US indices recently. This should not come as a surprise as upbeat data from the United States shows that risk of earlier-than-expected tightening is real and the tech sector is one of the most exposed. Other markets that are likely to become more volatile in the aftermath of the release are GOLD, EURUSD and TNOTE.

US100 bottomed out after US CPI reading for April. Index has recovered around 900 points since and is trading less than 2% below all-time highs. Source: xStation5

The Federal Reserve surprised investors this week with its decision that was seen as hawkish. Gold and stocks moved lower while the US dollar strengthened....

DocuSign (DOCU.US) stock rose more than 5% despite the negative sentiment which prevails on the market today. Company shares are trading higher after Wedbush...