A batch of data from across the pond has caused a spike in volatility in recent trade ahead of the forthcoming US session. The most noteworthy release comes on the inflation front with the CPI indicating a lower than expected level of price pressures while the latest unemployment figures remain strong. The data was as follows: 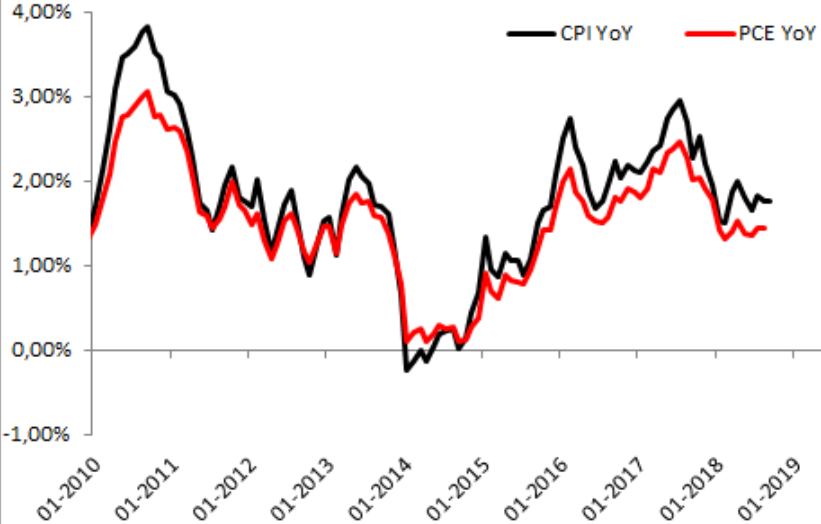 US inflation appears to have levelled off in recent months, although the latest CPI figures showed a small but unexpected decline. Source: XTB Macrobond

There’s been a notable reaction to the data in the fixed income space with a clear push higher in US yields which has sent the USDJPY up to its highest level of the day and Gold down by around $10 since the data dropped to trade just above the $1500/oz mark. Source: xStation

The market reaction for indices has been a little less pronounced and the feeling remains that Wall Street is awaiting further news on the trade front before embarking on a sustained move. Some negative remarks in the South China Morning Post caused a sharp flush lower in the US500 overnight, but the market has since regained its poise and trades back to little changed from last night’s close.

The price action in US stocks could be described as mildly positive of late with two clear spikes lower being readily bought and printing large wicks below the relevant H4 candles. A break above 2930 would be seen as further positive and also see price move back above the H4 cloud. However, trade headlines will likely be the order of the day and to some extent technicals could be seen to have less influence at present given the potential for large moves on the back of any fresh trade news. Source: xStation