Victory odds shorten for the Tories after BXP support

It’s been nearly a week into the official UK election campaign ahead of the December 12th ballot and yesterday we got the first potentially major development with the Brexit party (BXP) lending their support to the Conservatives. There had been a concern amongst the Conservatives that the “leave” vote would end up being split between themselves and the Brexit party but these fears were allayed to some extent after their leader Nigel Farage announced that they wouldn’t contest the 317 Conservative seats won in the 2017 election.

The pound jumped on the announcement from the Brexit party, surging by 75 pips in less than 15 minutes. However, the news has failed to provide a lasting boost. Source: xStation

Given that there are 650 seats available, 326 are needed for a majority, although in practice the number can be a little lower than this - the Speaker normally doesn’t vote and Sinn Fein MPs traditionally refuse to swear allegiance to the Queen and are therefore not entitled to vote. There were 7 Sinn Fein MPs in 2017.

According to bookmakers, the odds of a Conservative majority have shortened after the Brexit party support, with a price of 1.63 giving an implied probability of 61.3%. Note that it seems they are the only party with a fighting chance of securing a majority with the odds on a Labour majority very long.  Source: Betfair exchange


The Conservatives retain a solid lead in popular polls by around 11 points but how this translates into seats is obviously the most important aspect and due to the first-past-the-post electoral system this can involve a large margin of error. For instance the latest polls put Conservative support around 40% and this is the proportion of the popular vote won by Labour during the last election in 2017, which gave them just 262 seats - a long way short of a majority. Due to this it is complex and with a large margin for error to attempt to model the number of seats that each party will win, but as a rough proxy of current expectations we can once more look to betting markets. 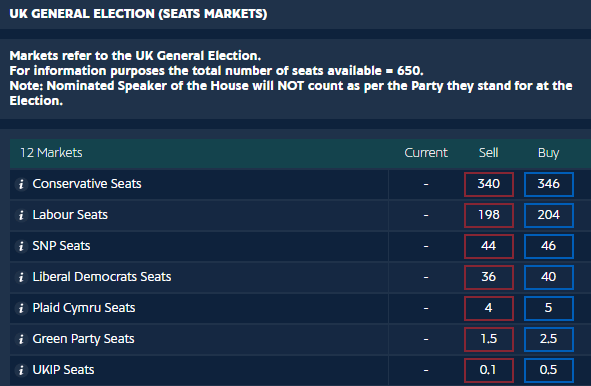 The seats markets shows that the Conservatives are expected to achieve a decent majority according to bookmakers. It is worth noting that the size of the majority could be important as anything over 20-25 would allow the party to not rely on the support of their more eurosceptic ERG wing to pass legislation. Source: Sporting index

Taking the two markets shown together it is quite clear that the main opposition to the Conservatives would come from a coalition amongst Labour, Lib Dems and the SNP. The seats markets puts these combined on a midpoint of 283 (276-290 spread) so they would need to improve significantly to get a majority. However, along these lines the Conservatives are unlikely to find any support from these parties and it seems that if they fail to secure a majority on their own the best they would receive very little help from elsewhere and due to the feelings of the ERG would find themselves with a huge problem to pass any Brexit bill.

In summary it’s still early days but the latest events have been seen as a clear positive for the Conservatives and their prospects of securing a majority. It is worth noting that the Brexit party are still set to contest the remaining 333 seats for the time being and they could still eat into the Conservative vote amongst these and cause them to lose seats. Expectations according to bookmakers are pointing to a decent chance of a solid Conservative majority but with a month to go there are sure to be many twists and turns still to come. Before the last election, polls showed a higher level of support for them than that at present, and the Conservatives ended up losing seats so it is entirely feasible that this could play out once more.

The EURGBP fell to its lowest level in 6 months after the pound rallied on the Brexit party announcement. Price is now just over 1% from its lowest level of the year around 0.8473. Source: xStation