It’s been a fairly steady week so far for US stock benchmarks with lower levels of volatility than those seen previously, but as it draws towards its conclusion its looking like another good one for the bulls. The S&P500 is on track for a 4th consecutive weekly gain and continues to trade not far from all-time highs.

US stocks are on course for another weekly gain and trade not far from record highs of 3029. A broad megaphone pattern can be seen from a weekly timeframe which shows an expanding range. Price is once more drifting towards the top of this pattern. Source: xStation

The economic calendar from north America is light this afternoon with no releases of note from the US and just a speech from Fed member Rosengren the way of scheduled events. This is of particular interest because Rosengren was one of two hawkish dissenters to this week’s rate cut (the 3rd dissenter was Bullard who called for a 50 bps cut) and while there’s not much market moving from his latest remarks they are therefore noteworthy nonetheless. Selected comments are as follows:

These are clearly in keeping with his stance at present in believing that no further rate cuts are required and while the markets have brushed off a less-dovish than expected Fed by and large, it is still worth keeping that in mind going forward. Given the policy meeting this week it is far from a given that we will see another 25 bps cut this year and Fed speak in the coming 6 weeks will likely be scrutinised further for additional clues.

There has been a clear market reaction to some Canadian data with the Loonie falling lower as the latest consumer spending figures missed forecasts. Retail sales M/M came in at 0.4% as expected, although the prior was revised down by 10 basis points to now stand at -0.1% but the bigger disappointment came from the core figure. Retail sales ex autos M/M contracted with a print of -0.1% and given that a 0.2% increase was expected this marks the 3rd time in 4 months that this indicator has missed forecasts. 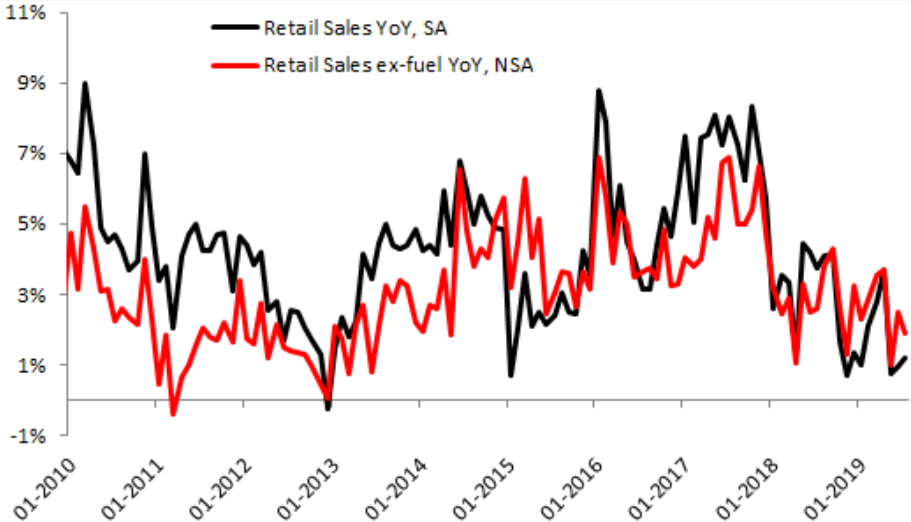 Consumer spending in Canada is experiencing year-on-year growth near the bottom end of the range seen this decade with the core figures falling lower in recent months. Source: XTB Macrobond

USDCAD spiked higher after the release, but the pair remains in a range overall with support seen around 1.3235 and resistance first at 1.3295 and then at 1.3310. Source: xStation