The Cupertino company has shown an impressive performance during 2020 and this has been visible in that the evolution of its sales has not shown negative figures in any of the observable quarters of last year. In fact, sales increased almost 100% QoQ between the third and fourth quarters of 2020.

With the beginning of the year 2021 and investors' eyes on inflation fears, an increase in US bond yields and a slower-than-expected economic recovery, they could exert some downward pressure on Apple's price, which, given the shortage semiconductor industry, forced the company to halt production of the iPhone 12 mini. This will have negative consequences for this next quarter with respect to the sales figure, but also during 2020 it had to compensate Samsung, the provider of OLED screens for mobile terminals with $ 1,000M for reducing orders and in 2019 this payment represented a disbursement of $ 684M. Big drawback if we see that more than 50% of sales come from the sale of smartphones. 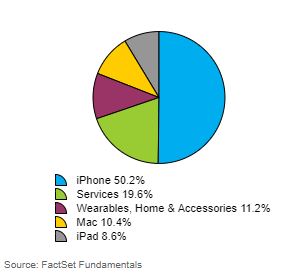 At present we have seen how what was an alignment in the behavior between the price of COPPER, a raw material necessary for the production of semiconductors, and Apple's share, is going to have an inverse behavior since the price of the raw material to skyrocket since the beginning of the year, knowing that the COPPER market as far as demand is concerned, it is China that monopolizes more than 50% of the market share and that due to the shortage of semiconductors it caused the price to skyrocket.

Fortunately, the relaxation in the price of COPPER has allowed Apple to recover part of its price to face the second quarter with improvements mainly in software of its terminals, as well as a greater weight in subscription sales to its streaming service Apple TV.

Regarding the sales of the last 10 quarters, Apple shows an average growth of 5.62% while the earnings per share is average for the same periods it shoots above the double digits to 12.57%

Regarding its stock market performance, after reaching its latest historical highs at $ 152 per share, the correction derived from the increase in the price of COPPER and the shortage of semiconductors began, which could predict a downward revision of the sales figure. Bullish finally managed to keep the price above their EMA200 and since then it has tried for the second time to break the EMA50 to re-launch the bullish momentum to new all-time highs.

On April 28 we will know the results of the second fiscal quarter of the year 2021.