Stock of the week: AT&T

2019 already saw announcements of some stunning deals like Celgene-Bristol tie-up or Newmont-Goldcorp merger. Beginning of the new year also brought final verdict in the AT&T-Time Warner merger case following a two-year long spat with the US administration. In this analysis we will take a look at the timeline of the deal as well as discuss new service AT&T plans to launch thanks to Time Warner acquisition.

AT&T stock was behaving more or less in line with the sector in between millenium launch and merger close. On the other hand, Time Warner trailed peers quite significantly during past few years. Source: Bloomberg, XTB Research

The acquisition of Time Warner by AT&T was first announced in October 2016. However, as one may notice news of this $85 billion mega-merger came more or less one month ahead of the 2016 US presidential elections. Due to Time Warner being the owner of CNN TV channel the case attracted a lot of negative publicity from then-candidate Donald Trump. Trump is known and vivid critic of CNN reporting and told his supporters during campaign rallies that in case he wins his administration will not allow this merger to happen. Not long after the Republican took office the US Department of Justice began to investigate the merger and tried to block it. Concerns that the deal would harm competition and consumers were cited as the main reason behind process launch. On one hand, it sounds reasonable as both companies had significant market shares in their industries but on the other, Trump’s words hinted that AT&T-Time Warner may be in the centre of the political game.

Following AT&T CEO’s refusal to divest part of businesses in November 2017, the US Department of Justice filled in a lawsuit in order to block the tie-up. Lawsuit was dismissed in June 2018 offering the two US companies green light to merge. The deal was concluded two days later and Time Warner became wholly owned subsidiary of AT&T (after renaming it to WarnerMedia). However, completion of the merger did not stop the Department of Justice from trying to, ironically, block it and the US agency appealed. The US Court of Appeals refused to back DOJ appeal on 26 February and upheld previous ruling. Following this defeat the US administration gave up and that allowed combined entity to focus on primary business rather than antitrust skirmishes. 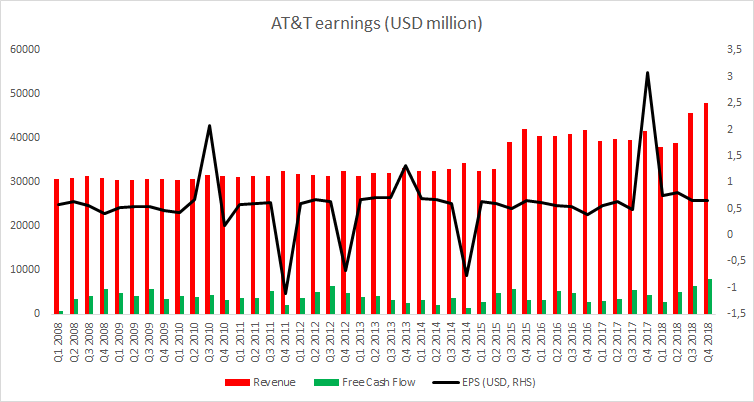 As one can see on the chart above AT&T revenue and earnings were quite stable during the past decade. The company also managed to avoid even a single quarter of negative free cash flow during this period. Spikes in revenue in mid-2016 and mid-2018 result from acquiring respectively, DirecTV and Time Warner. Source: Bloomberg, XTB Research

As we have discussed the timeline of the deal already let’s look for rationale behind it. AT&T is one of the top2 US wireless service providers - along with Verizon Communications two companies held 65-70% combined share in the US market in each quarter during this decade. Time Warner was one of the world’s biggest media companies with solid portfolio of TV channels as well as strong presence in the entertainment industry - it is the owner of, for example, Warner Bros. film studios. On the first glance those two industries are completely different. However, taking a look at it from the different point of view one can see that Time Warner was developing a product while AT&T was providing means to enjoy this product (through its TV channel packs or Internet services). Putting it this way, significant synergies resulting from this deal become apparent.

This, of course, is not a coincidence but part of a bigger plan of AT&T CEO and Chairman, Randall Stephenson. The executive is eyeing setting up a streaming platform that will be able to compete with the ones of Netflix or Amazon. Following acquisition of Time Warner, the company not only took control of Warner Bros. film studios but also became owner of HBO and all of its series or movies. Having said that, it already holds rights to stream an enormous amount of blockbuster titles, like for example DC Comics superhero movies or Harry Potter series. However, being able to stream does not mean that people will automatically switch to your services. So how can AT&T reach potential streaming platform customers? 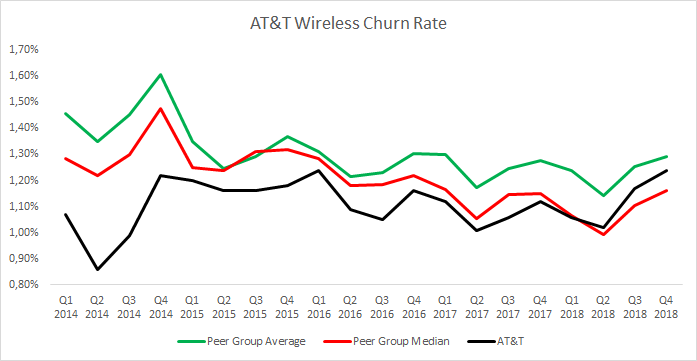 AT&T is enjoying some of the lowest churn rates among the US wireless services providers. Churn rate is percentage of clients that decided to stop using company’s services during the period. Brand loyalty of AT&T’s clientbase may play key role in whether launch of streaming platform will be successful or not. Source: Bloomberg, XTB Research

Luckily for AT&T it should not be much of a problem. The US company has over 170 million customers in the United States, Mexico and Canada. This number relates to businesses considered core for AT&T prior to the merger with Time Warner. However, in the aftermath of the acquisition number of direct-to-consumer relationships grew and exceeded the 370 million threshold. How does it relate to attracting customers to new services? It is quite simple. As we said earlier AT&T is now in touch with over 370 million customers so it can easily build market position by simply offering new services to current clients at favourable terms. Moreover, as AT&T now has numerous services in its offer it can solicit new customers by offering them product bundles. Selling Internet and streaming services in a single product pack is a practice already used by Internet providers in various parts of the world. However, what differs AT&T is that it will be marketing its own streaming services rather than just serving as an intermediary for other companies.

AT&T’s streaming platform was not launched yet but we can already provide two milestones for it. The first one could be 100 million subscribers - Amazon Prime services are said to have breached this threshold at the end of 2018. It means that if AT&T manages to offer enough favourable terms to convince 25-30% of its current client base to expand into its streaming services, it will instantly jump to top2 spot in video streaming industry. Next milestone in line could be 150 million subscribers - this is more or less number of Netflix (industry leader) subscribers at the end of 2018. Of course it will take time to get to such figures and during this period amount of Amazon Prime or Netflix subscribers is also likely to rise so those threshold would move somewhat higher over time but our point is that AT&T is already better positioned than Netflix was in its early years (due to abundant client base) and has a scope to build a solid profit-making segment. 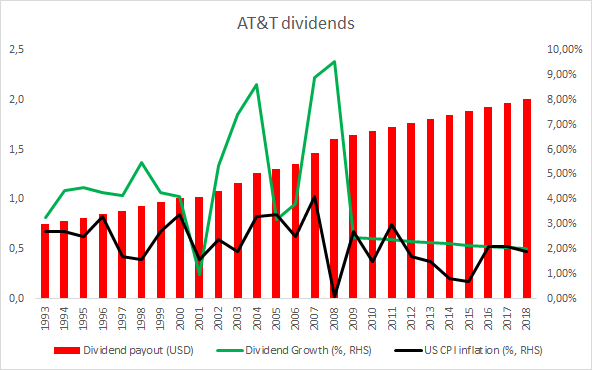 AT&T (T.US) provided shareholders with stable and rising income through its dividend policy. However, it should be noted that following the financial crisis pace of dividend growth stalled around 2%. Source: Bloomberg, XTB Research

Apart from setting up streaming platform AT&T also plans to boost efforts in another lucrative business - advertising. The company acquired AppNexus, the US advertising software company, in mid-2018 and integrated it into Xandr division, advertising segment of AT&T. While the company already has some advertising revenue, acquisition of AppNexus also provided the US telecom with strong analytical tools. In turn, AT&T will be able to get better understanding of customer trends and tailor its entertainment offer to needs of clients. Last but not least, AT&T’s primary industry is the one with relatively stable cash flows as need for wireless services is uncorrelated with the business cycle (client base may not increase too quick during recession but it is also highly unlikely that a bulk of AT&T consumers will resign from using Internet or telephone due to plunge in domestic economic activity). Having said that, the telecom has means to distribute profits to shareholders and does it via solid and stable dividend policy. The company has been raising dividend payout annually since 1985 and in most years pace of dividend growth exceeded US inflation. AT&T paid $2.01 dividend per share in 2018 providing shareholders with dividend yield of 7.04%, much higher than 2.15% for the whole S&P 500 index.

AT&T (T.US) has been trading within a downtrend since mid-2016. However, bearish pressure eased somewhat as of late and the stock began to trade within a consolidation range. Note that price was often respecting the 200-session moving average in the past (purple line on the chart above) therefore it may be wise to keep track of it. Source: xStation5