• The total number of confirmed coronavirus cases surpassed 5.62 million of which more than 348,000 died and over 2.39 million recovered.
• US remain the epicenter of the disease with over 1.70 million cases. Brazil surpassed Russia and is now the second worst-hit country, with 376 669 registered cases.
• Number of new cases reported each day remains high. WHO experts warned that we may be heading for a second peak of the first wave of infections. 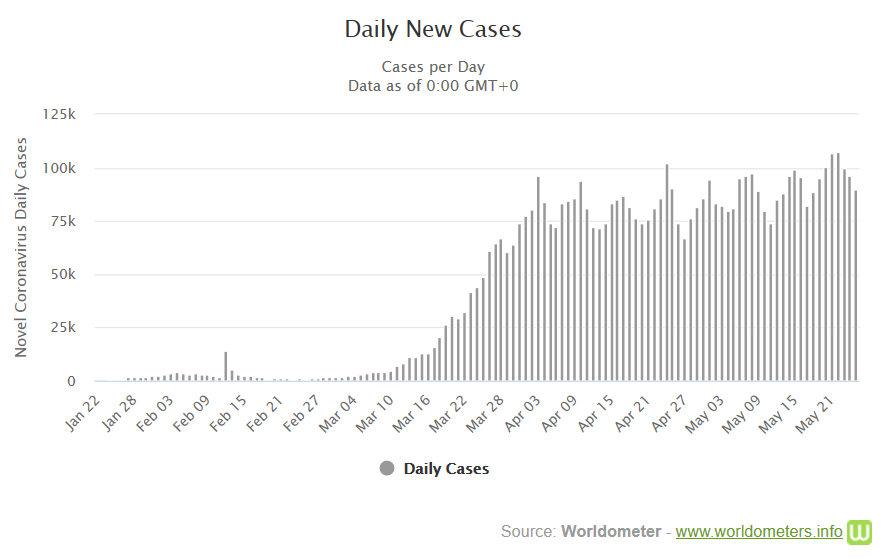 On Monday 89,812 new cases were reported which came in below 7-day average which currently stands at 99 449. Source: Worldometers
• Syria reported 20 new cases of the novel coronavirus on Monday, the largest single-day increase to date, the health ministry said. The war-torn country has recorded 106 infections and four deaths so far, and number of new cases have increased recently as many Syrians returned from abroad, the ministry said. Health Minister Nizar Yazigi said last week that "coercive and unfair" Western sanctions were hitting medical services needed to cope with coronavirus and he called for their removal. 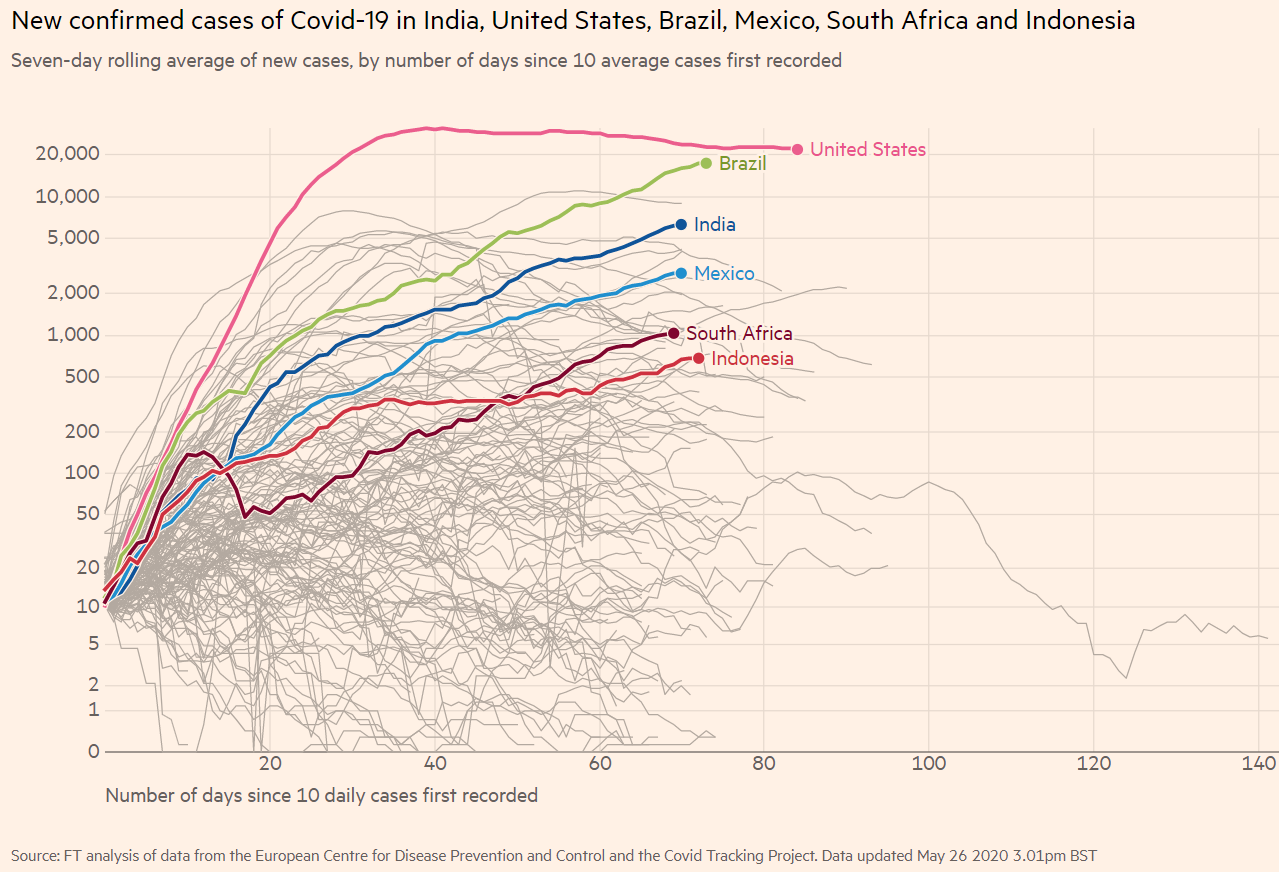 While cases are declining in many countries they are still increasing in Central and South America, South Asia and Africa. Source: Financial Times
• The US is the country with more deaths caused by the virus with over 99 thousand, followed by the UK, Italy, France and Spain. 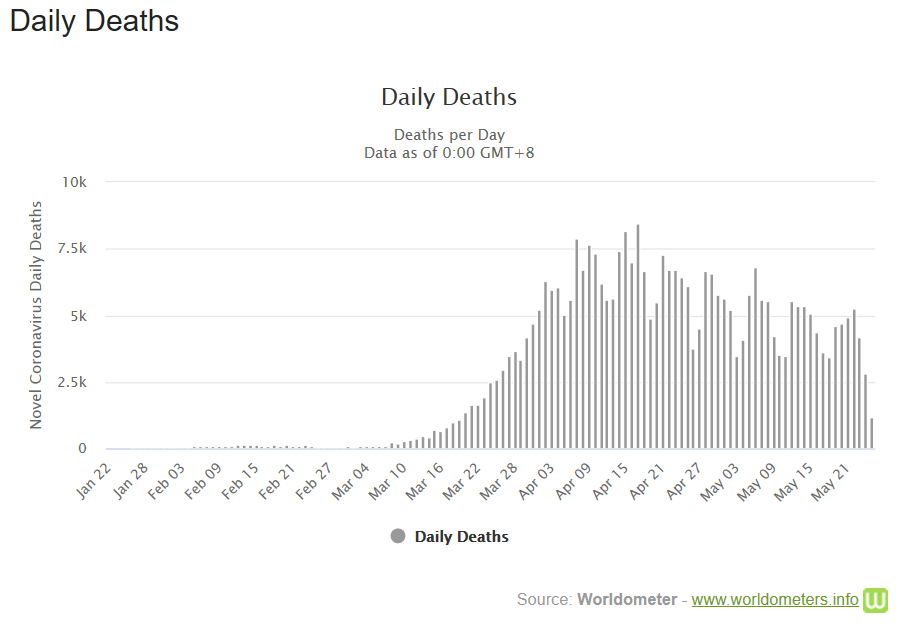 Yesterday 1179 people have died due to coronavirus, the lowest level since mid-March. Monday’s figure came below 7-day average, which currently stands at 3949.Source: Worldometers
• Brazil daily coronavirus deaths were higher than fatalities in the United States for the first time over the last 24 hours, according to the country's Health Ministry. Brazil registered 807 deaths over the last 24 hours, whereas 620 died in the United States.
• The Office for National Statistics said 42,173 people had died in England and Wales with suspected COVID-19 as of May 15, bringing the UK total to 47,343 - which includes earlier data from Scotland, Northern Ireland, plus recent hospital deaths in England.
• Health officials have reported 1,655 deaths from the virus in Mexico City, out of 7,633 deaths nationwide. They have also acknowledged that the true death toll is higher, but difficult to estimate due to a low testing rate. 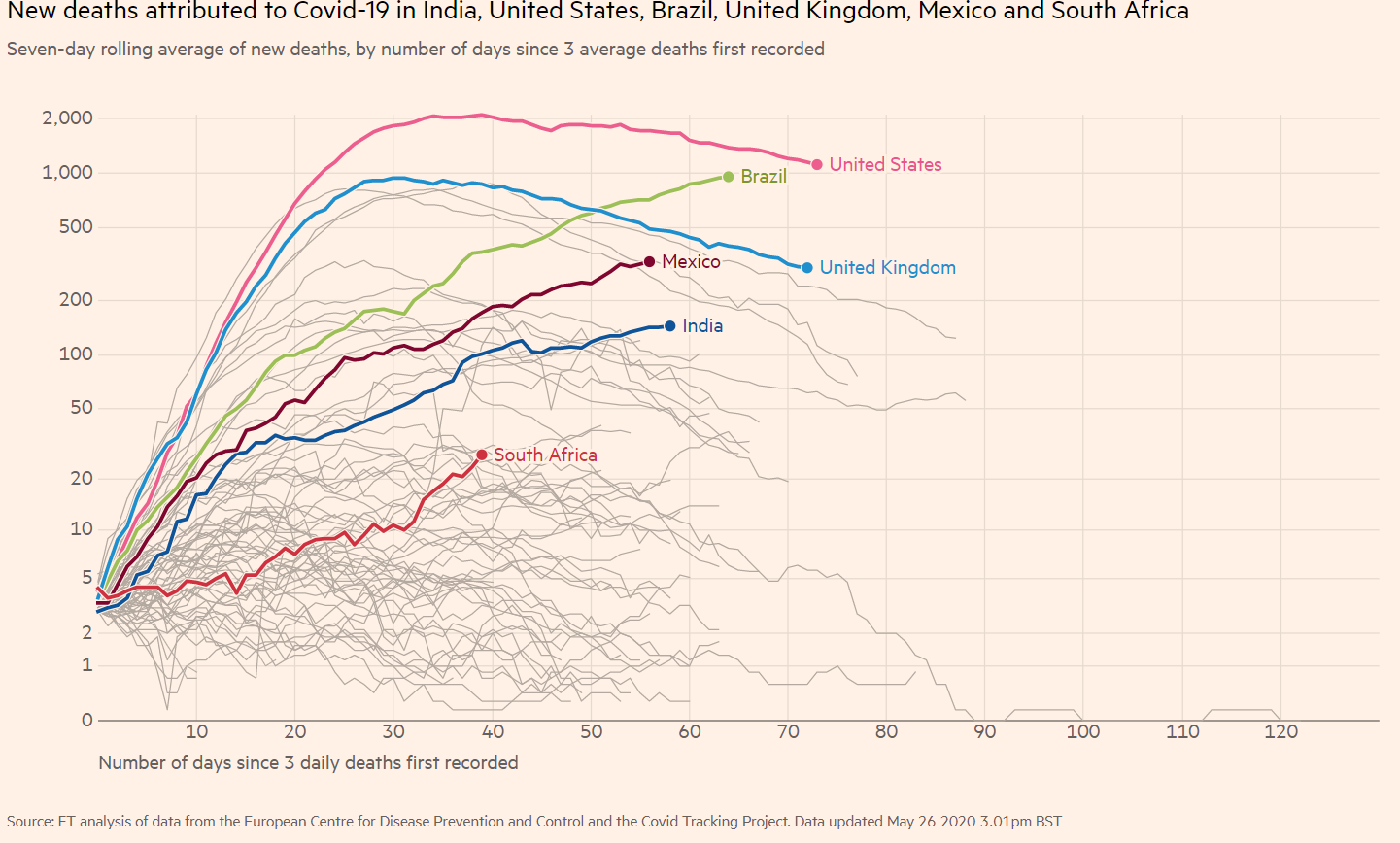 Daily death rate seem to be accelerating in Africa, Latin America and in some Asian countries. In Europe, Great Britain has recorded the largest number of deaths caused by the coroanvirus. Meantime US death toll from COVID-19 fast approaches 100,000. Source: Financial Times
Share:
Back

The Conference Board's consumer confidence index was 86.6 points, while the forecast assumed 88.0 points. (previously 86.9 points). The index for May...

USDCAD is trading lower today. However, the pair reached a key technical support. Looking at H4 interval, the area marked with green colour at 1.3870 is...