Monday is very mixed on the markets. In absence of major reports and events investors are awaiting a very busy week: start of the Q4 earnings season (tomorrow), Phase1 deal signing (Wednesday) and a long list of macro reports. The day has seen a long list of contradicting moves.

For contradictions look no longer than to stocks where US tech keeps its unrelenting surge higher, pushing US100 close to all-time highs on the back of surge in Tesla stock price. Tesla trades above $500 for the first time ever, a mind-blowing achievement given the price was below $180 at the end of May! Market sentiment is not so great everywhere: techs pull US100 and US500 up but US2000 (smaller stocks) is having a second thoughts and indices in Europe are mostly in the red with ITA40 down 0.6%. 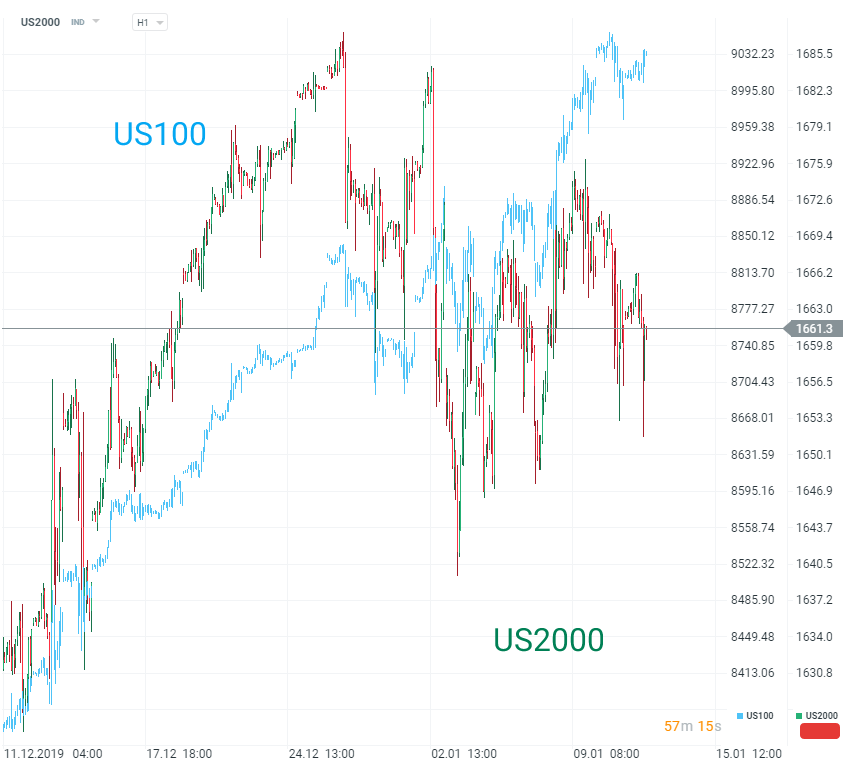 US2000 is sending warning signals as US100 is surging higher. Source: xStation5

There are some strange moves in the FX segment as well. GBP weakness is well understood: industrial output fell as much as 1.2% m/m in November, way above expectations (-0.1%). This increases odds of rate cuts this year. However USDJPY surged to 110 just as bond prices recovered. Weaker yen is also usually accompanied by solid EM performance but this is not the case today: USDBRL is up 1.4%, leading rout on selected (but not all) emerging markets. EURUSD moved somewhat higher after defending 1.11 on Friday. Fed’s Rosengren warned that too low rates can cause financial risks but given his hawkish label and non-voting status in 2020 his remarks had minimal impact on the markets.

There were some major moves in commodities. OIL and OIL.WTI both declined more than 1% after breaking the key support zones as investors left Middle East tensions behind. Coffee (-3%) continued a massive sell-off which was additionally augmented by weakening Brazilian real. The move took place despite the news that Brazil is seeing below average rainfall that could hurt supplies.