NFP report for April is eagerly awaited by investors, especially after the latest release showed an over 900 thousand increase in US employment. Market expects a similar report for April, what can be reasoned with further reopening of the economy. What should we expect from Friday's report? How will EURUSD and yields perform? Will Wall Street recover from a recent sell-off triggered by concern of possible increase in interest rates?

Market consensus compiled by Bloomberg points to a 998k employment gain in April. The lowest estimate hints at 700k increase while the highest suggests that 2100k jobs were created in the previous month. After a few months of stagnation, employment in Leisure & Hospitality as well as Education & Health Services has rebound over the past two months. Retail sector also experienced stagnation but in this case we may see a recovery in April due to a new round of stimulus checks. 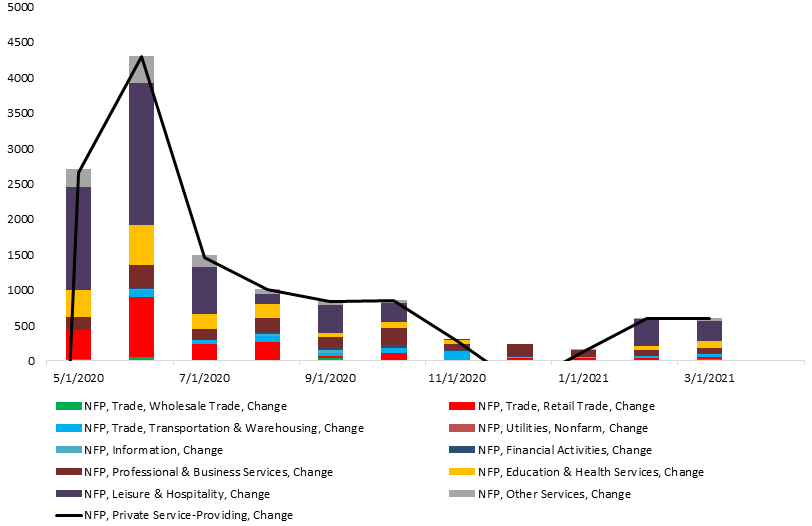 Employment in Education & Health Services as well as Leisure & Hospitality segments experienced boom-like conditions in the past two months. However, those employment gains are not enough to satisfy the Fed. Source: Macrobond, XTB 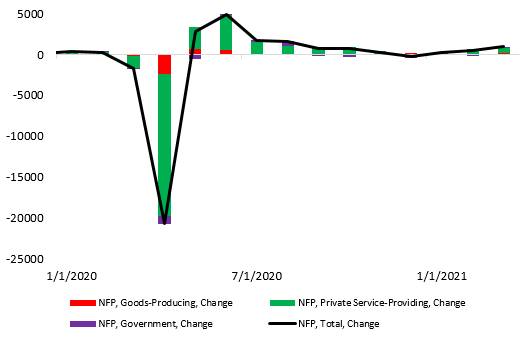 US economy is still short of around 8.4 million jobs lost during the pandemic. Will Fed change its view when employment starts to rise by 1 million jobs on a monthly basis? Source: Macrobond, XTB

What can we read from early signals?

Reopening of the economy is one thing but traders should also look at signals sent by companies. Situation looks to be improving on this front but that latest ADP report raises some concerns. It has shown a 742k employment gain, amid expected 810k increase. However, it should be noted that ADP pointed to a 565k increase in March while NFP report showed a gain of over 900k jobs.

Average initial jobless claims dropped from around 720k to 610k since the last NFP release. The latest data showed claims significantly below 600k.

Fed sent a clear signal that it is not concerned about inflation now. Latest remarks from Yellen calling for higher interest rates should not change the Fed's view. Having said that, even a stellar jobs report for April should not have a major impact on the direction of Fed's policy. However, should inflationary pressures mount, US central bankers may signal that there is a need to begin discussion about QE tapering. Given that the Fed has ignored recent signals, it looks unlikely that FOMC will decide to change policy prior to June.

EURUSD managed to defend the key support area at 1.20 and relatively low yields may be the reason. As one can see, TNOTE trades near key short-term resistance at 132.8 points. Source: xStation5

US100 dropped hard following Yellen remarks on the need for higher interest rates. US100 reached the target of a double top pattern. 13,333 pts area is a key support for now. Source: xStation5

A strong downward move could be observed on the oil market yesterday. Taking a look at technical situation on OIL.WTI at H1 interval, we can see that price...

Economic calendar: Quadruple witching day in the US