Equities began the new week on the front foot with indices around the globe rising after a solid read on Chinese manufacturing was released not long after the markets opened, but this optimism has subsided in recent trade with US benchmarks trading back to little changed ahead of the opening bell. In particular the price action in the German Dax could be seen as serving as a warning sign with the index this morning moving up above last week’s highs before tumbling 200 points to trade below last week’s lows.

While there’s still a long way to go in today’s session there’s a possible reversal developing in US stocks with a push to a new all-time high fading and price now trading in the red on the day. Highs around 3158 now possible resistance whereas the gap higher from last week’s open at 3109 could be a potential target for shorts. Source: xStation

The reason behind this reversal comes from a pretty familiar source with a Trump tweet appearing to be the catalyst. The US president took to Twitter to announce metal tariffs on Brazil and Argentina, and while this is not as negative for sentiment as a similar move against China would be, it is a reminder that the protectionist policies are unlikely to be abandoned anytime soon. 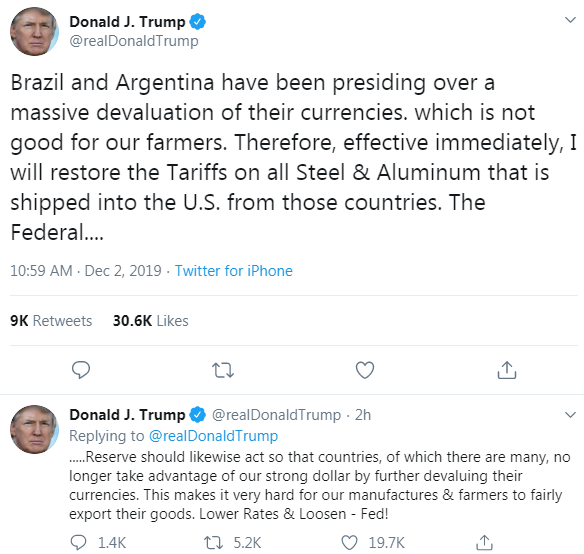 Trump has kicked off a new week with two of his favourite themes in a string of tweets - tariffs on imports and pressuring the Fed to lower rates. Source: Twitter

Looking ahead the ISM manufacturing PMI released at 3PM (GMT) could be a key market mover, with the consensus forecast calling for an improvement to 49.2 from 48.3 prior. This metric has come in worse than expected for the last four releases, with the previous 3 all below the 50 line to signal contraction.